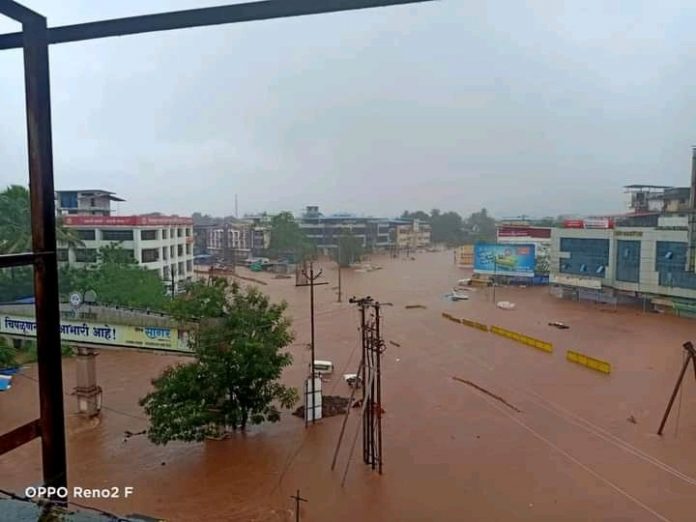 Massive flooding caused by incessant rain since July 21 has left thousands of residents stranded at Chiplun city in Maharashtra’s Ratnagiri district, media reports said. The Vashishti, the lifeline of the city, is flowing above the danger mark, district officials said.

The rising water levels submerged the first floors of many houses. The state government has rushed two teams of the National Disaster Response Force (NDRF) along with rescue boats as Chiplun has been cut off from its adjoining cities, reports said.

“The situation is serious but under control,” Ratnagiri district collector B N Patil told The Indian Express though some say that this flooding is worse than the one in 2005. The NDRF teams are yet to reach there as they are apparently stuck on the way because all roads to Chiplun are blocked due to flooding,” Patil said, adding that they have also sought the help of the coast guard.

The water level at the Vashishti river bridge between Chiplun and Kamathe stations in Ratnagiri has risen above the danger mark after the heavy downpour, an official said. “Train services in this section are suspended temporarily,” he said.

According to rail officials, 5,500-6,000 passengers were stranded in trains which were regulated at various stations on the Konkan Railway route. The Konkan Railway said that due to the flood situation at Chiplun, nine long distance trains have been regulated. Out of these, the Dadar-Sawantwadi special train was regulated at Chiplun station and the CSMT-Madgaon Janshatabdi special train at Khed station.

Marketplaces, residential and commercial complexes are under water. Electricity and communication lines have been snapped, bridges in and around Chiplun are flooded and it was difficult to get in touch with local residents, officials said.

Shiv Sena MP Vinayak Raut, who represents the Sindhudurg-Ratnagiri Lok Sabha constituency, said as per his information, at least 5,000 villagers need to be shifted to safer places as water has entered their homes.”

The Centre should rush helicopters to rescue people as the city has become inaccessible by road, said Raut.

This is the second disruption on the Konkan Railway route in the last few days. On July 19, train services on the route were suspended for a day due to seepage of water in the Old Goa tunnel near Panaji. The Konkan Railway has a 756-km-long track from Roha near Mumbai to Thokur, located close to Mangaluru.