Maharashtra Governor Bhagat Singh Koshyari invited the NCP to stake claim to form government in the state after he refused to provide more time to Shiv Sena after its deadline to form a government ended at 7:30 pm on Monday (November 11). The NCP has time till 8:30 pm on Tuesday to form the government.

Meanwhile, the Congress remained indecisive over extending support to a Shiv Sena-led government despite holding marathon discussions and a meeting of the Congress Working Committee. After hours of deliberations, it decided to hold further talks with ally NCP, while keeping its options open on participation in the new government. 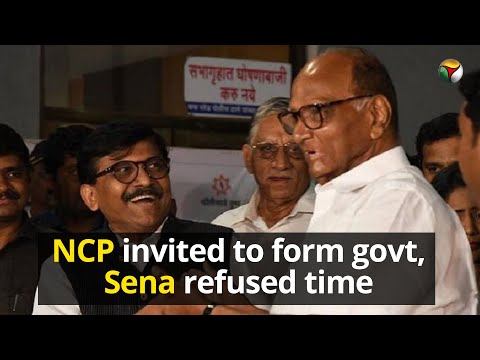 Earlier in the evening, a delegation of Sena leaders, including Aaditya Thackeray, met the governor and indicated its willingness to form government in the state. However, the governor rejected their request for an extension of the deadline and subsequently, invited the NCP to stake claim.

“The Congress president (Sonia Gandhi) has spoken to Sharad Pawar ji. The party will have further discussions with the NCP,” a statement issued by the party’s general secretary KC Venugopal said after the second meeting of Congress leaders. After two crucial meetings, the top leaders of the party preferred to have a detailed discussions with the NCP on the political impasse in the state.

Sonia is learnt to have told Thackeray that she is yet to talk to Congress MLAs in the state and no decision has been taken yet on whether to lend support to the Sena, sources said. The Sena is the second largest party in the 288-member House with 56 MLAs after the BJP (105). Besides, the NCP has 54 seats and Congress 44.

PTI quoted sources as saying that a section within the party is against extending support to the Shiv Sena which is ideologically opposite to it and that the party fears suffering electoral losses in future if it is seen supporting an extreme right-wing outfit like the Sena.

Insiders say the Congress is still mulling the pros and cons of support to the Sena as its party MLAs are keen to have a say in the government and do not want fresh election. AICC general secretary in-charge for Maharashtra Mallikarjun Kharge said further discussions with NCP leaders would be held on Tuesday in Mumbai.

Senior Shiv Sena leader Sanjay Raut on Monday said there was no point in continuing its alliance with the BJP if it was not willing to fulfil its promise of sharing the chief minister’s post in Maharashtra. The two allies were engaged in a hard bargain over the sharing of the top post, which the BJP had strictly refused, prompting the BJP to opt out from the race.

Reaching out to the opposition parties, Raut said the Congress and the NCP should bury their internal differences to come up with a ‘common minimum programme’ in the interest of Maharashtra. Earlier in the day, Sena leader Arvind Sawant, the lone party minister in the Narendra Modi cabinet, announced his decision to quit the NDA government at the Centre.

He further said that Sena was given only 24 hours to prove its majority while the BJP had 72 hours in hand for the same, hinting that the governor’s invitation was a ploy by the BJP to impose President’s rule in the state.

Meanwhile, BJP leader Sudhir Mungantiwar said that the core group of the party decided that it will ‘wait and watch’ the political developments in the state.