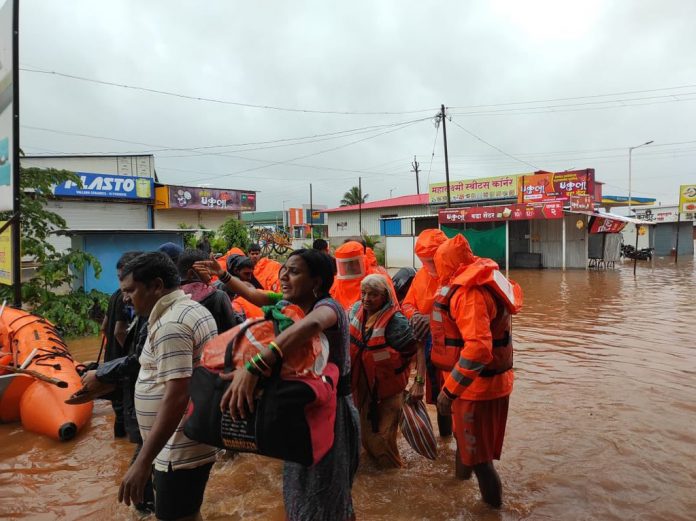 Around 150 teams belonging to the National Disaster Response Force are engaged in relief and rescue operations across Maharashtra and other affected areas. Pic: Twitter

Since this impeded evacuation efforts, residents of districts facing the brunt of the disaster moved to the roofs of their submerged houses as they awaited rescue teams.

On Sunday, Maharashtra Chief Minister Uddhav Thackeray visited flood-hit Chiplun in Ratnagiri district and met officials and local representatives to assess the extent of damage and ongoing relief operation. He is likely visit Sangli and Satara districts on Monday.

Thackeray also interacted with residents, businessmen, shopkeepers and others, and assured them that the state government will work toward restoring normalcy in their neighbourhoods. The Chief Minister said the state will require “Central assistance for long-term mitigation measures”.

Media reports said Union MSME Minister Narayan Rane visited Taliye village in Raigad, which had witnessed a massive landslide last week. Prime Minister Narendra Modi had asked him to submit a report on rain damages, said Rane. Houses damaged by the disaster will be rebuilt under the Pradhan Mantri Awas Yojana, he added.

Around 150 teams belonging to the National Disaster Response Force (NDRF) are engaged in relief and rescue operations across the flood- and landslide-hit areas of the country, media reports said. Of these, 34 teams have been deployed in Maharashtra alone.

On Sunday, as the rain intensity reduced in Maharashtra’s Satara district, local authorities stepped up search efforts for those who went missing after the landslides. Reports said traffic remained suspended on the Mumbai-Bengaluru highway as parts of Kolhapur were still inundated.

An NDTV report said Maharashtra Water Resources Minister Jayant Patil is camping in Sangli district to oversee the rescue and relief efforts.  The state government has announced a ₹5 lakh compensation to the families of those killed by the floods and landslides. Additionally, it plans to bear the cost of treatment of those injured.

Modi said in a statement he was “anguished by the loss of lives”. He and President Ram Nath Kovind have been in touch with the Maharashtra government and Governor BS Koshyari to offer aid, he added.