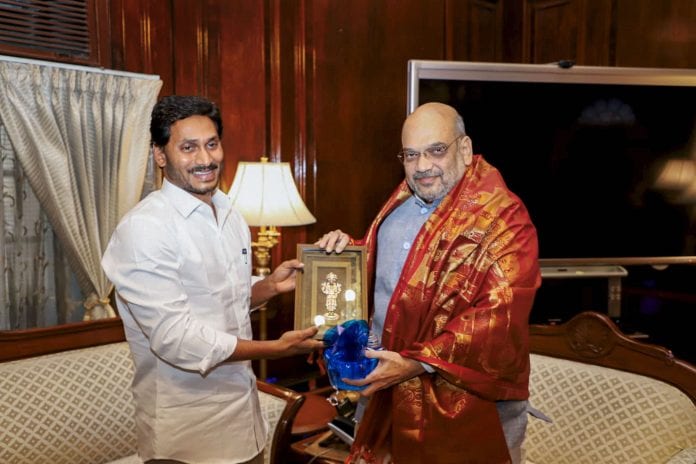 ‘What 2014 was for North-East, 2024 will be for South’ is the new mantra being chanted by the BJP leaders in the two Telugu states of Telangana and Andhra Pradesh.

Even before the euphoria over an emphatic Lok Sabha victory could subside, the saffron party has unveiled its ‘Look South’ mission for the 2024 general elections.

“Our next target will be the southern states,” a beaming Himanta Biswa Sarma had declared soon after the announcement of the Lok Sabha results last month. Widely credited with the saffron surge in the northeastern states, Sarma is the poster boy of the BJP in the region.

As part of its ‘Look South’ mission, the BJP is drawing up plans to make inroads in Telangana and Andhra Pradesh, using different strategies for each state.

In Andhra Pradesh, where the BJP drew blank in both the Lok Sabha and Assembly elections, the plan is to use the YSR Congress Party supremo and Chief Minister Y S Jagan Mohan Reddy’s shoulders to fire at his rival Telugu Desam Party and then occupy the opposition’s role before the 2024 poll battle.

However, the strategy for Telangana involves a ‘direct fight’ against the ruling Telangana Rashtra Samithi (TRS), luring senior leaders from a weakened and faction-ridden Congress into its fold and highlighting the ‘dynasty politics and minority appeasement policies’ of Chief Minister K Chandrasekhar Rao.

While the rest of southern states, barring Karnataka, gave a thumbs down to the BJP in the Lok Sabha elections, the outcome in Telangana surprised many including the ardent fans of the saffron party. It bagged four out of the total 17 LS seats — Secunderabad, Karimnagar, Nizamabad and Adilabad — in a state where the party was largely seen as a fringe player. And, the prize catch among them was Nizamabad where the Chief Minister K Chandrashekar Rao’s daughter K Kavitha was defeated.

Barring Secunderabad, all the other three seats are considered strongholds of the TRS. The gains have come as a major boost for the BJP which could win just one seat in the 119-member Assembly in the December 2018 elections and polled just 7 per cent votes.

The saffron party’s vote share has almost doubled from 10.5 per cent in the 2014 elections to 19.4 per cent this time. This has emboldened the party to take on the TRS government more aggressively.

The buzz in political circles is that the back-channel efforts are already on to ‘catch the big fish’ among the state Congress leaders. It is said that Ram Madhav, the national general secretary and a key negotiator of the BJP, is in touch with the potential defectors.

Significantly, they all belong to the influential Reddy community, considered the strong support base for the Congress.  A leader from this community — G Kishan Reddy (MP from Secunderabad) — is now a minister in the central cabinet.

“The outcome of the Lok Sabha elections has clearly proved that Telangana is going to be the fertile and potential ground for the growth of BJP in the next five years. Now, our aim is to conquer the state in 2023 and form the first BJP government in the state,” the state BJP president Dr K Lakshman said.

In his assessment, there is a ‘huge political vacuum’ in the state at present and the recent Lok Sabha verdict was a vote against the ‘dynasty and dictatorial rule’ of both the Chief Ministers — Chandrababu Naidu and Chandrashekar Rao.

The BJP leader pointed out that the defeat of KCR’s daughter in Nizamabad and that of his close aide Vinod Kumar in Karimnagar indicates that there was an undercurrent for the BJP in the state, which the party would take advantage of and grow in the next four years to capture the state from the TRS.

The party leaders are of the view that induction of Kishan Reddy into the Union cabinet as a minister of state for home affairs was a strategic move to improve its strength in Telangana. Reddy is said to be close to party president Amit Shah.

“Telangana provides a perfect political setting for BJP to repeat its West Bengal strategy. Like in Bengal, the BJP will be looking for Hindu consolidation by harping on the TRS’ friendly ties with the AIMIM (All India Majlis Ittehadul Muslimeen) and its Muslim appeasement policies,” said political analyst Dr K Nageswar.

Roping in Ram Madhav to lure Congress leaders into the BJP fold, bringing in Kiran Bedi as Telangana Governor and building a binary political narrative could be part of the saffron party’s plans for the state, he said.

For Andhra Pradesh, a long-term plan has been drawn up. Sharing the broad contours of this plan, BJP sources said the “first couple of years would be a honeymoon period” between the party and the new government headed by Jagan Mohan Reddy. The offer of the Lok Sabha Deputy Speaker’s post must be seen in this background of bonhomie.

The plan also involves helping Jagan to get the exemption from weekly court appearances in Hyderabad with regard to the illegal assets case. In all probability, the CBI case against him will be diluted over time.

“We will take Jagan’s help to further weaken our common rival TDP. In any case, Congress is no force at all. The entire Congress cadre has since migrated to the YSR Congress. Over the next two to three years, the TDP will be completely neutralised,” sources said.

Promising protection from possible harassment from the YSR Congress regime, the lower level TDP leaders would be lured into the BJP camp. Though a senior minister in the Naidu cabinet had approached the BJP leadership soon after his party’s loss in the recent elections, he was asked to wait for a couple of years.

“We have a timeline for poaching. After a couple of years, some second rung TDP leaders, former MPs, former ministers and ex-MLAs will be encouraged to switch loyalty,” the sources said.

The names of senior TDP leaders like J C Diwakar Reddy, Paritala Sunitha, Kesineni Nani are doing the rounds, though it is too early for any major desertions.

A strong network of RSS and other Sangh Parivar organisations, particularly in the Visakhapatnam-Rajahmundry belt, will play a key role in expanding the base and occupying the opposition’s space.

“It is possible that the TDP here will encounter a situation similar to the one being faced by the Congress in Telangana. A political vacuum created by the possible exodus from TDP will give enough space for the BJP to launch itself as a viable alternative,” a senior political analyst G Nagaraja said.

Andhra Pradesh is known for its strong caste loyalties. However, only a few influential communities like Kamma and Reddy have been controlling the levers of political power. There is a possibility of the BJP targeting some of the ‘ignored’ communities and attempting a social engineering experiment of the kind that it successfully implemented in the Uttar Pradesh Assembly elections.