Two of the four men accused of rape and murder of a veterinarian, who were killed in an encounter on Friday (December 6), had snatched weapons from the police and opened fire at them when they were taken to the spot of crime to get the sequence of events re-constructed, Cyberabad Police Commissioner VC Sajjanar said on Friday (December 6).

Addressing a press conference hours after the encounter that took place early on Friday, he said two police officers — one SI and another constable, suffered head injuries during the encounter. The injured policemen were identified as SI Ventasherwarulu and Constable Aravind Goud. There were around 10 police personnel with the accused, he said, adding, “I can only say that law has done its duty.” 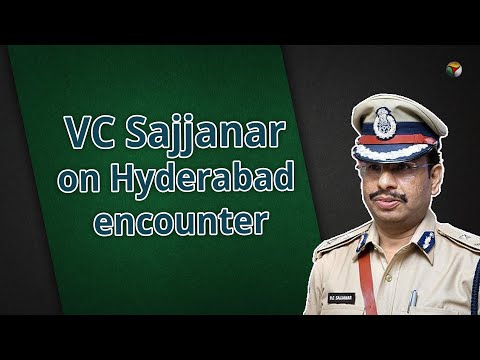 “Scientific evidence and human intelligence helped us arrest the four accused. On November 30, they were remanded to judicial custody. On 4 and 5 December, we interrogated them after taking the accused into police custody,” he said.

The Commissioner said the police brought the accused to the crime spot as part of the investigation during which they attacked the police with sticks and also snatched their weapons and opened fire.

Also read | Hyd encounter isn’t justice, it replaces one monster with another

“The police warned them and asked them to surrender but they continued to fire. Then we opened fire and they were killed in the encounter. During encounter, two police men have been injured and they have been shifted to the local hospital,” he said.

He said two weapons were also seized from the accused. “Their bodies have been shifted to Mahboobnagar hospital for post-mortem examination. We have recovered the victim’s cell phone here at the spot,” said the Commissioner. We suspect the accused were involved in many other cases in Karnataka as well, he added.

Asked about the National Human Rights Commission taking suo motu cognizance of the encounter killings, the Commissioner said, “We will answer whoever takes cognizance, the state government, NHRC, to all concerned.” The NHRC has asked the DG (Investigation) to immediately send a fact finding team for an on-the-spot investigation into the matter, reports said.

Meanwhile, there were celebratory scenes at the encounter site as well with scores of people gathering to congratulate the police and shouting slogans such as “Telangana Police zindabad”. Some women were also seen distributing sweets to police personnel.

The four men, Mohammad Areef, Jollu Shiva, Jollu Naveen and Chintakunta Chennakesavulu, were arrested a day after the woman’s body was found on November 28 morning in a charred state.

The encounter killing of the four accused set off a chorus of appreciation as well as concern among people. While some politicians, including Rajya Sabha MP Jaya Bachchan termed it as speedy justice for the victim, others, such as Lok Sabha MPs Maneka Gandhi and Shashi Tharoor said extrajudicial killings are a matter of concern.

Pakistani drone shot down by BSF along Punjab...