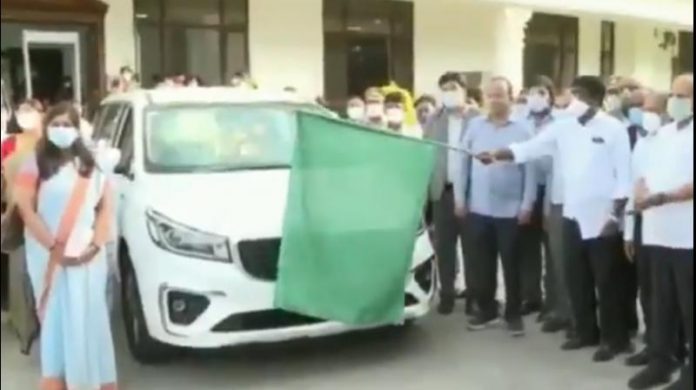 Telangana Chief Minister K Chandrashekar Rao has been very generous with gifts to Gods. In 2017, he had gifted gold ornaments worth ₹ 5.6 crore —at the taxpayer’s cost — to the Tirumala temple. On Sunday (June 13) he handed over 32 Kia Carnival SUVs — each costing an estimated ₹ 25-30 lakh — to additional collectors of all districts, saying they deserve good vehicles as they travel to discharge their duties effectively.

The brand new vehicles arrived at Pragati Bhavan on June 13 for distribution to additional collectors.

The bonanza came at a time when the state is reeling under a debt of around ₹ 40,000 crore, besides battling the Covid pandemic.  Telangana Transport Minister Puvvada Ajay said the CM thought that for easy mobility and travelling officials need comfortable vehicles.

In 2015, Toyota Fortuners were given to district collectors. At that time there were only 10 districts in Telangana, he added.

Finance Minister Harish Rao had recently stated that Telangana had lost massive revenue of up to ₹ 4500 crore due to the COVID-19 lockdown, seeking to increase Fiscal Responsibility and Budget Management limit from 4 to 5 per cent to raise more loans.

Opposition parties have hit out at the “splurge”. The BJP accused the CM of appeasing the bureaucrats. “How can Chief Minister Rao justify spending over ₹ 11 crore to buy 32 ultra-luxury vehicles?” party spokesperson Krishna Saagar Rao asked.

“It is massive wastage of public money in the middle of the pandemic, while many poor people are dying of debt burden due to COVID-19 hospitalization. This decision is unthinkable,” said the BJP leader, demanding an immediate rollback of the decision.

D Sravan Kumar of the Congress said the state government had already pushed the surplus state into a debt trap. “There is a whopping debt of ₹ 4,00,00 crore. They already have government cars in good condition,” he said.

Also read: KCR is set to perform ‘mother of all yagams’ at public expense

The Congress spokesperson alleged that the Telangana Rashtra Samithi government, instead of spending on ramping up the number of beds in government hospitals or buying buses for public transport was misusing public money.

For the record, in 2017, KCR, as the CM is known, had presented a solid gold ornament to Lord Balaji and a nose-stud to Goddess Padmavati, both revered deities at Tirupati. Later he presented a moustache of pure gold to the Veerabhadraswamy temple at Kuravi.

Why Sharmila is banking on Telangana Reddys to realise ‘Rajann...