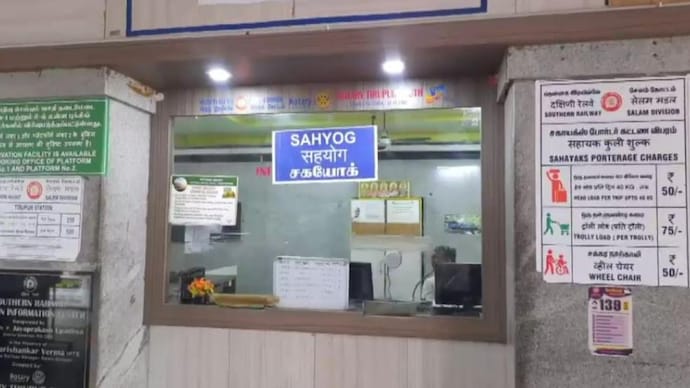 A fresh row over the imposition of Hindi by the Centre has broken out in Tamil Nadu.
The problem started when a display board or signage featuring the Hindi word ‘Sahyog’ (meaning assistance) came up outside the Tiruppur railway station information centre.

The word ‘Sahyog’ was transliterated in English and Tamil as well on the board. This display sign had purportedly replaced an earlier signboard which had the Tamil word ‘Sevvai Maiyyam’, meaning ‘information centre’.

The Sahyog signage was removed after commuters complained that they were not able to understand what the word meant and when regional political leaders strongly protested. Inf act, Tiruppur South MLA K Selvaraj shared a video of the poster being removed by the officials.

Southern railway authorities explained that the signage was put up since a large number of migrant employees working in the industrial area knew only Hindi. However, the Pattali Makkal Katchi (PMK) dismissed this as bogus since a majority of people frequenting the station were Tamils.

The PMK founder Dr S Ramadoss condemned the entire incident and said that it was a blatant attempt of the Centre to impose Hindi. According to Ramadoss, the railway station may be a central government office but since it is located in Tamil Nadu, the signboards should be written in Tamil. If it is required, information can be given in English and Hindi as well, he said, asking for the immediate removal of the new signage.

Meanwhile, DMK youth leader, Udhayanidhi Stalin commented that Hindi will never be imposed on Dravidian soil. He tweeted that Dravidian soil that has been tarred with ‘black’ tar also does not allow for Indian stuffing of ‘saffron’. “We warn you,” he added. In fact, the Tamil Nadu Assembly had adopted a resolution against “imposition” of Hindi last month and urged the Centre not to implement recommendations of the report of the Parliamentary committee on Official Language.