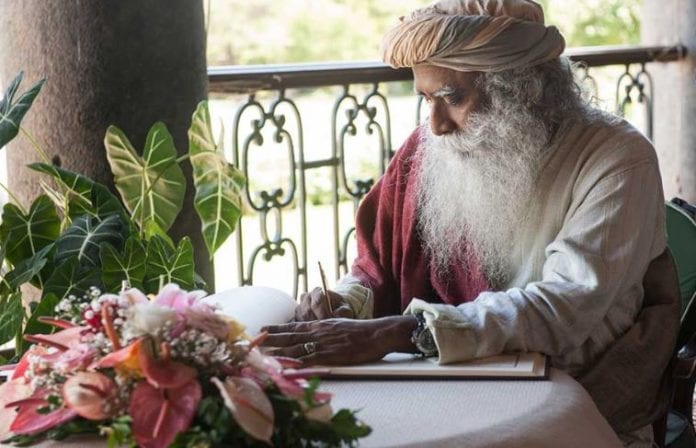 Isha followers say they are 'appalled' that a man of Jaggi Vasudev’s 'stature' has been subject to attacks | Photo: Isha Foundation

The Isha Foundation on Sunday criticised Tamil Nadu Finance Minister PTR Palanivel Thiagarajan, who recently called its founder Jaggi Vasudev “a charlatan who is trying to find another angle to make money” by demanding that temples be freed from the administratorship of the State Hindu Religious and Charitable Endowments (HR&CE) Department.

In an open letter to the minister, Isha volunteers said they were “appalled that a man of his [Vasudev’s] stature has been subject to the minister’s unparliamentary and uncalled for personal attack in a recent media interview [to The Hindu], calling him a ‘publicity hound’ and a ‘commercial operator’. It is deeply unfortunate that a person holding high public office should resort to name-calling of a highly respected public figure. This unseemly attack trivialises the efforts and dedication of millions of Isha volunteers worldwide who are working tirelessly in service of humanity”.

In his interview with The Hindu, Thiagarajan, a devotee of Goddess Meenakshi of Madurai, had dismissed the self-styled sadhguru’s temple demand as “nonsense”. “Random people make random noise. These are the people who want to break the goodwill of society,” he said. “In the case of Jaggi, he is a publicity hound and charlatan who is trying to find another angle to make more money.”

“Will a godman, who is focused on god, be selling Sivarathiri tickets for ₹5,00,000, ₹50,000 and ₹5,000? Is that a sign of a man of god? Is that the identifying mark of a spiritual man? He is a commercial operator pretending to use god and religion to get help,” said Thiagarajan, whose grandfather, PT Rajan, was the chief minister of the Madras Presidency and leader of the Justice Party, which was instrumental in creating the HR&CE Department.

In its letter, the foundation’s followers said “sadhguru and Isha Foundation have worked with various elected governments from across the political spectrum and will continue to do so for the welfare of the people”.

“Cooperation and support have been the nature of our relationship with every government. We regret the deterioration of this culture and the poor standard of public discourse. This is certainly unbecoming of an elected representative and an honourable member of the State’s Cabinet.”

The letter said that for nearly 30 years, Isha Foundation volunteers have been working for the well-being of people in Tamil Nadu.