After a gap of 23 years, when the consecration of the historic Brihadeeswarar temple in Thanjavur district of Tamil Nadu was performed on Wednesday (February 5) thousands of devotees gathered to witness the grand ceremony. But one thing that stole the limelight of the said Big Temple was the wall paintings by the students of Government Fine Arts College, Kumbakonam.

The district administration approached 210 students from the department of painting, sculpting and visual communication about a month ago and asked them to paint the walls based on several themes such as Swacch Bharat, the state’s traditional food and games, and iconic landmarks in the country. 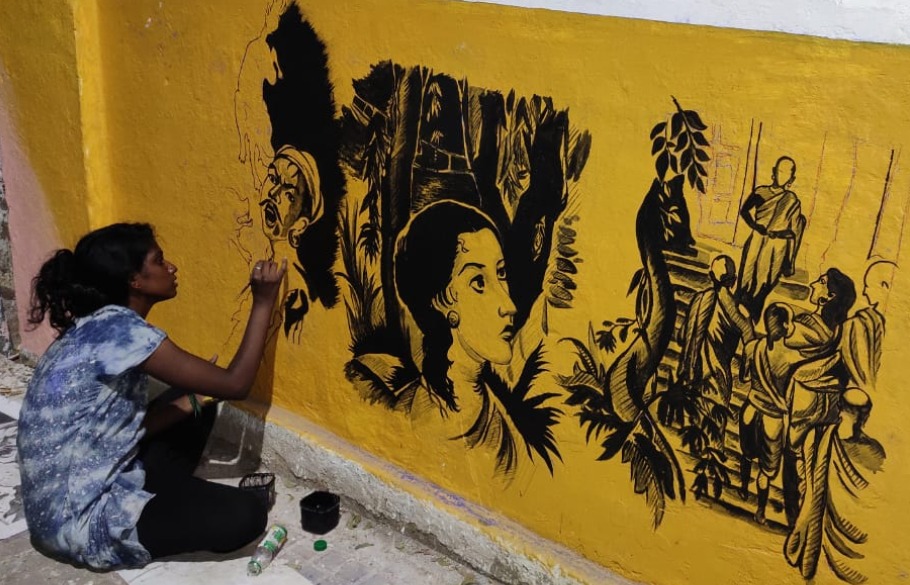 “Besides such regular themes, we also paint 108 karanas (actions) of Bharatanatyam. However, the main attraction is the paintings adapted from the scenes of Ponniyin Selvan, a Tamil novel that takes place surrounding the temple” said Adithya Devi, a second-year M.F.A. student.

The fine arts students also reproduced illustrations of the Periya Kovil (Big Temple) created by a well-known artist named Maniam during a serialised adaptation of Kalki Krishnamurthy’s five-volume historic novel Ponniyin Selvan (The son of Ponni) which revolved around the life of Raja Raja Cholan I, the founder of the original temple. They beautified the vicinity of Thilagar Thidal, located within 500 metres from the temple with their art.

“Each student was given one scene from the novel and asked to reproduce it. So, totally we painted 72 scenes of the novel,” said Devi. 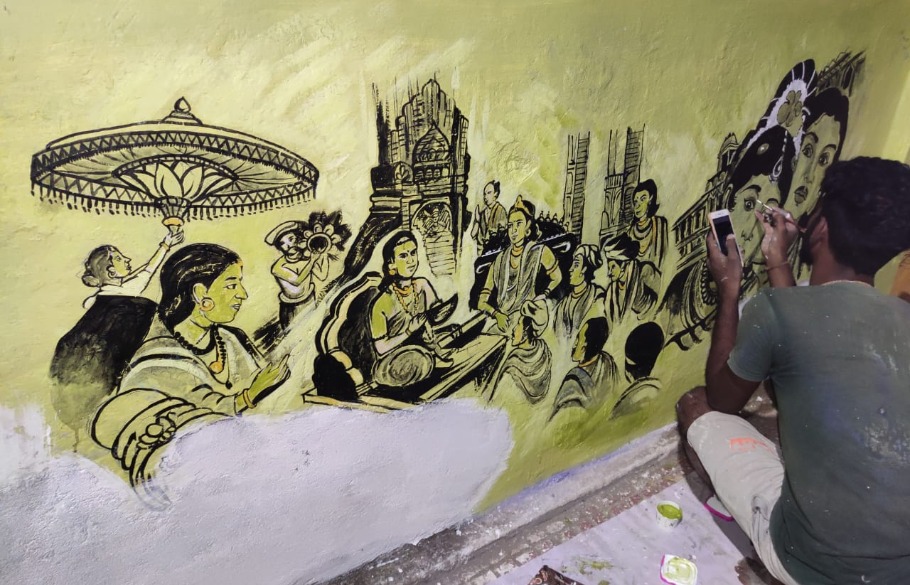 Punitha, a third-year B.F.A. student of the visual communication department said that the entire sequence of Ponniyin Selvan gives the gist of the whole novel.

“Initially it was a bit difficult for us to draw the storyboard of Ponniyin Selvan, since many of us used to draw modern paintings. We were advised not to use many colours. So we used colours only for the background and for the lines. Those who already read the novel can easily found out what the paintings talk about. For starters, they can understand the main concept of the novel through these sequence of paintings” she added. 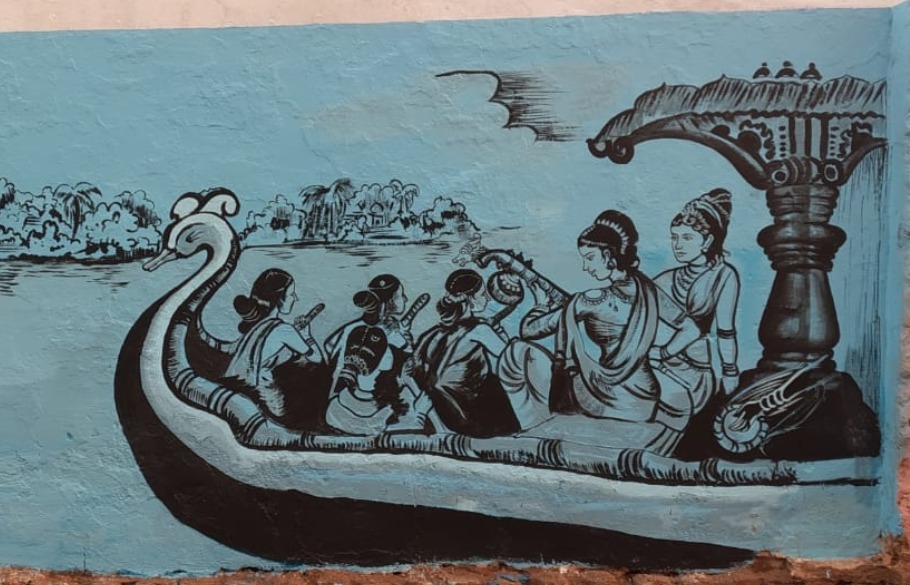 The students, who were paid approximately ₹7,000 to ₹10,000 based on the size of the art work, recreated several interesting designs including a portrait of Ilaveyini, a Sangam era poetess from Kuravar caste, famous for writing Yeraikkone. This was her only poem which also got ranked 157 in Purananooru, a collection of 400 poems about the life of general public.

Explaining about the steps taken by the students to maintain the paintings, Devi said, “Since the walls were not even, we found it difficult to paint but the corporation officials flattened them. Cleaning the wall was another major challenge because of movies and political posters being stuck on it for years. We used acrylic for painting and varnished them so that the durability is more than five years.” 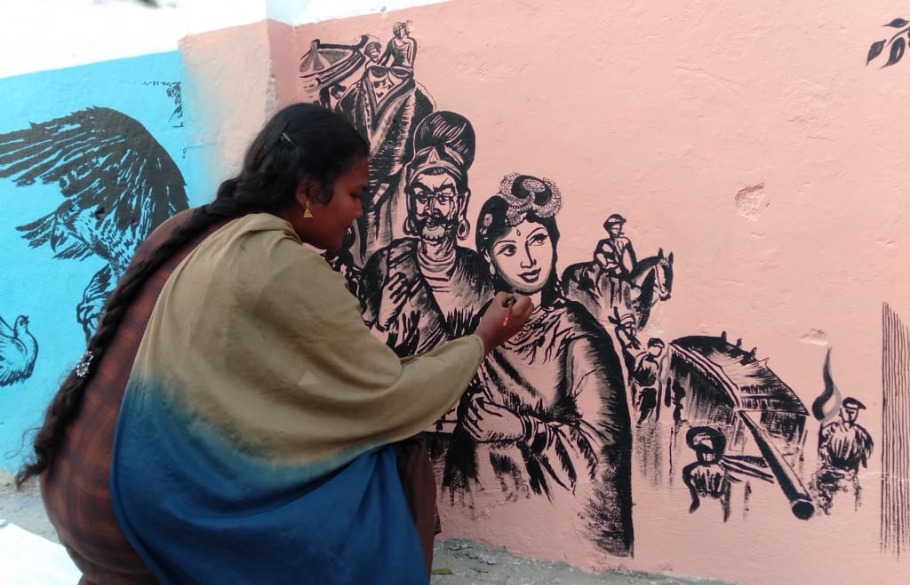 While speaking to The Federal, Professor Radha from the Department of Painting pointed, though the artworks were varnished for better durability, it is the responsibility of the people to maintain these paintings.

“The district administration and the corporation officials have promised us to ensure that the paintings are maintained well. They said they are taking steps to prevent sticking posters. Though the government take steps from its side, the public should realise its responsibility. Only then these paintings can be maintained for long” she added. 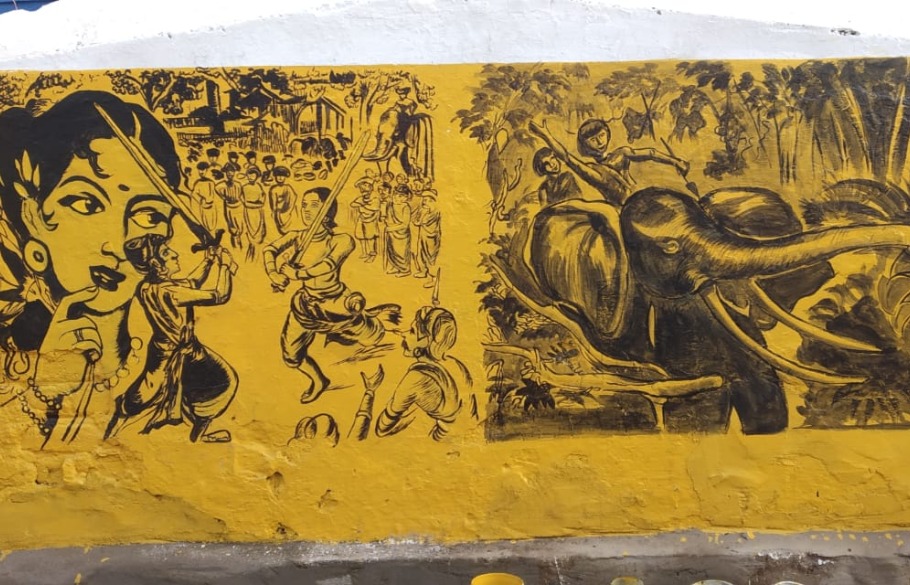 The consecration has not just revived arts and literature of the state, but since the time of the big announcement, passages from other novels such as Bala Kumaran’s Udaiyar, which elaborates the deeds of the Chola Empire have gone viral on social media and taken over book fairs.

“In every book fair, the novel Udaiyar goes well. Due to the consecration, the sales of this particular novel was high in recently concluded Chennai Book Fair and it is continuing in the current Tirupur Book Fair. The sales is equal to the numbers of Ponniyin Selvan,” said Palani, sales manager of Visa Publications which published the novel. 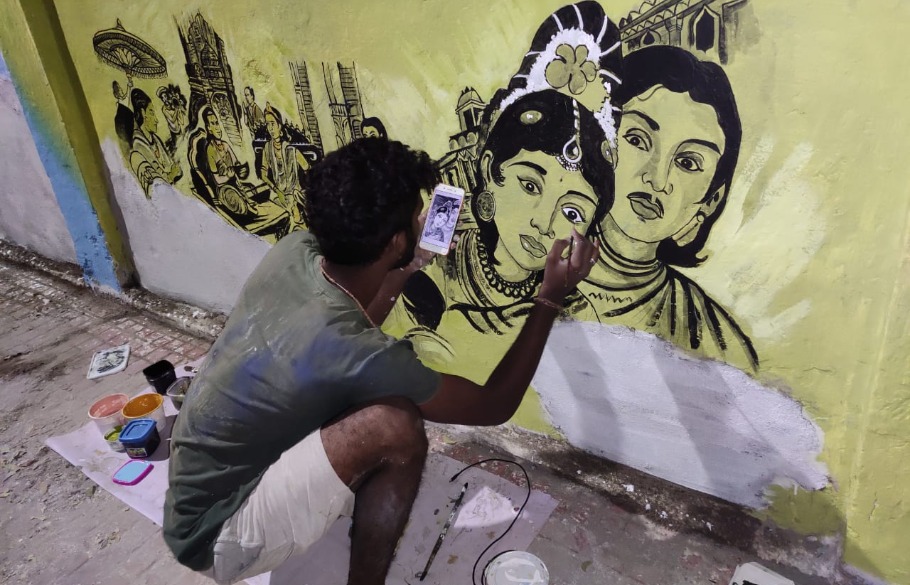 Activist P. Maniarasan, convenor of the Thanjai Big Temple Rights Retrieval Committee said that the consecration was done both in Tamil and in Sanskrit.

“During the consecration which took place in the Gopuram, where Kalasa Pooja was done, the Tamil hymns were recited along with Sanskrit slokas. But we don’t know what happened inside the sanctum sanctorum” he added.