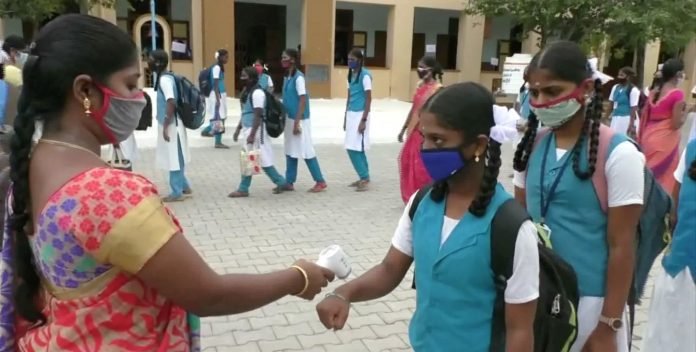 Schools for children in classes 9 to 12 opened on September 1.

Amid discussions about the looming threat of a third wave, students and teachers across Tamil Nadu, were rejoicing and happy to be back at school after a long gap.

The Tamil Nadu government had announced that schools for classes 9 to 12, colleges and polytechnics would reopen in the state from September 1, 2021.

For Thi Parameswari, a government school teacher from Ranipet district seeing the students after such a long time was a “refreshing” sight. “It is students who make the school lively. Without them, it is just a building”, she pointed out.

According to Parameswari, students are not afraid of COVID. “Since the school is located in a village, most students who lack facilities for online classes would want to come to attend the offline classes,” she pointed out, adding that the parents were brimming over with happiness.

Also read: Schools all set to reopen, but is Tamil Nadu ready for the Big Day?

On the topic of safety precautions, the teacher explained that her school had doctors present in the school on the first day to monitor the children, she added.

The school had two sets of classes with one starting from 9 am to 10 am, and another from 10 am to 11 am. The two batches had to enter the school from different entry points and leave from separate exit gates after finishing their classes.

“We usually clean the toilets twice but now we are cleaning it four times,” added Parameswari.

PK Ilamaran, state president, Tamil Nadu Teachers Association felt the widespread fear that children would get COVID at schools seems unwarranted. Many children had flocked to Marina Beach when it opened, he said. Moreover, nobody could prove that the students had stayed inside their homes during the pandemic.

“Many students had become child labourers and had to step out of their homes. So, fearing that they will get affected by COVID only when they come to school is unfounded,” he argued, adding that students were attending school out of their own volition. No one was compelling them to attend the offline classes, pointed out Ilamaran.

About 80 per cent of students attended classes in almost every government and government-aided school, he added. “Since it was the first day, we asked teachers to spend time with students providing counselling on COVID and general cleanliness in a friendly manner,” he said.

According to Srinivasan, in the last two years, the number of children who died due to COVID-19 is less than 15. These children had co-morbidities like cancer and renal failure, etc., and not one died purely due to COVID, he said.

“It is the media that is creating a hype that so many children are being affected by the virus on a daily basis. They do not believe the data given by us,” said Srinivasan, who is also the Registrar, Institute of Child Health, Chennai.

Welcoming the state government’s move to reopen the schools, he said we cannot predict when the third wave would happen. But even if it were to come, the state health department was prepared.

Srinivasan questioned the rationale behind ignoring the fact that in India, 20 to 22 per cent of children were dying because of pneumonia. “Even diseases like pneumonia are air-borne. But we forget these children dying of penumonia and concentrate more on COVID”, he pointed out.

He scoffed at the argument that students will get COVID if schools are opened. This is baseless, he said.

“If schools are opened even diseases like typhoid and diarrhea may affect the children. But it is imperative to open the schools. Let the children be taught even more discipline by making them clean their hands, masking up and maintaining social distance,” Srinivasan said.

Moreover, Srinivasan felt that schools should run for two months at least before any conclusions are made. “If there are no cases, then there is no need to panic. We should become alert only when a group of children get affected in a particular school,” he added.

In his view, the government and the teachers are being responsible. The schools are getting disinfected, and transport authorities have been advised not to crowd the buses. “We have asked the schools to wind up the classes at different timings to avoid crowding. About 90 per cent of teachers are vaccinated. Now, it is the responsibility of the parents. Let them also ensure that they get their jabs, drop and pick up their children from schools,” said Srinivasan.