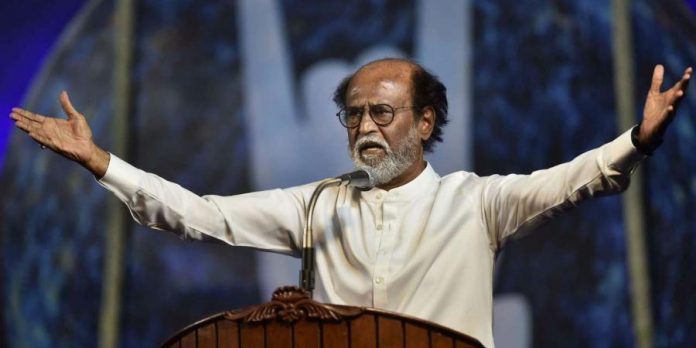 The Rajini Makkal Forum launched in 2018 and meant to be a platform to launch the actor's political career will now become a welfare forum for his fans. Pic: PTI

Superstar Rajinikanth has firmly shut the door on politics by formally dissolving his political forum, the Rajini Makkal Mandram, on Monday (July 12).

Addressing reporters, the 70-year-old actor, who has been troubled by health issues of late, spelt it out clearly: “I have no plans of entering politics in future.” Not before stating that what they had expected didn’t happen due to the prevailing situation.

Rajinikanth made this announcement while he was talking to reporters after he met the functionaries of his now defunct Rajini Makkal Mandram (RMM) for one last time. He also explained that it had taken him so long to close down his political forum because of constraints such as the COVID-19 pandemic, the Tamil Nadu Assembly elections, and due to his travel to the USA for his medical health check-up. Further, Rajinikanth has been busy shooting for his forthcoming film, ‘Annaatthe’.

The RMM, which was launched with a lot of fanfare and expectation in 2018, will however emerge in a new avatar as the “Rajinikanth Rasigar Narpani Mandram” or the Rajinikanth Fans Welfare Forum, said the actor.

This forum was meant to be a platform to launch the actor’s much-hyped political career, which sank even before it take off.

Just after his return from America last week, Rajinikanth had again raised the prospect of him joining politics by talking about the future of RMM and whether he should enter politics or not in the future. With this announcement however, this chapter in Tamil Nadu political history seems to have been closed.

On December 3, 2020, Rajinikanth set the cat among the pigeons when he said that he would be  launching his political party in January 2021, ahead of assembly elections in TN. However, he did a complete U-turn in the last week of December last year, citing health concerns and a kidney transplant he had in 2016.

Also, the actor was wary of campaigning in the Assembly elections, which was held in the middle of the raging second wave of the pandemic.

However, Rajinikanth seemed repentant when he told his fans, “With extreme sadness I say that I can’t enter politics.” He added that he alone knew the pain he had gone through to  announce this decision.

“Without entering electoral politics, I will serve the people. This decision of mine will disappoint my fans and people but please forgive me,” he said.

Since then, several RMM functionaries have left RMM and joined other political parties.

According to the NDTV report, Rajinikanth’s political party, many believe, would have impacted the outcome of the Tamil Nadu polls. Even after he had shelved his plans to enter the political arena, many BJP leaders had favoured reaching out to the actor for his support.

Some political observers believed that he would have been a misfit in politics. Though the “Rajinikanth effect” remains untested in politics, he reportedly turned the tide in favour of the DMK with his famous forthright comment against the AIADMK in the 1996 polls: “If Jayalalithaa is voted back to power, even God cannot save Tamil Nadu.” The AIADMK collapsed and the DMK assumed power at that time.

US Senator seeks removal of subsidies on whea...

Sikkim to plant 100 trees for every child bor...