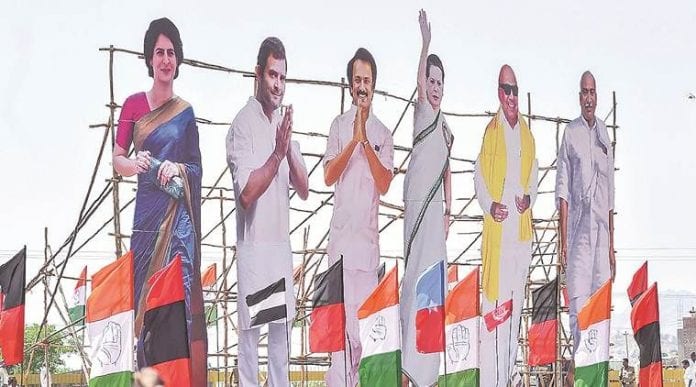 The banner culture, which the authorities have yet again woken up to, following the death of Chennai-based techie Subhasri, who was run over by a lorry after falling off her bike when a banner erected by an AIADMK functionary fell on her, is an invasive visual tradition that has its roots in the cinema-political nexus in the state.

Perhaps the most pervasive aspect of celebrations and observances, banners have become a way of life for common people, who resort to them for a larger than life effect to their events — weddings, birthday functions, puberty rituals, academic achievements to deaths and remembrances.

If one has to trace the origin of the culture, it would lead them to 1948, when producer-director SS Vasan came up with the magnum opus Chandralekha, a historical adventure film.

Jeevananthan, an artist who has worked on both hand-painted and flex banners, explains how the movie that had many firsts was also the first to trigger the banner culture.

“Tamil Nadu came up with the first film banner which was made by an artist called K Madhavan for Chandralekha. Therefore, it was Madras that introduced film banners to Bombay. The banners caught the fancy of political parties too, eventually. Back then, The Congress party didn’t focus on decorations then. But when DMK began finding its feet, they came up with visual elements like graffiti for their campaigns. Even their conferences which they were famous for, began to invest big on banners, arches and cutouts. In fact, they came up with chariot-like structures, emphasising a lot on grandiose,” he said.

The CPI(M) also followed suit by exploring the option creatively in places like Thiruvannamalai, he said.

K Thirunavukkarasu, historian of the Dravidian movement, says that the turning point for the banner culture came during the rift between former chief minister and AIADMK founder MG Ramachandran and the DMK in the 1970s.

“It was an ideal way to pit one against the other to exhibit one’s supremacy. The culture evolved alongside cinema because the latter emphasised on the sets and decorations, and banners acted as those sets for political parties to impress upon their followers their ideology, their sacrifices and their plan,” he said.

“It has evolved from the wall posters and graffiti to take the form of banners. The 70s therefore provided a lot of employment opportunities to artists who made brisk business with their art, rendering their services for political parties.”

In the political landscape, 2005-2006 was a defining moment for banner culture as it saw the entry of actor Vijayakanth with the launch of DMDK, points out S Raveendhran Dhuraisamy, a political researcher.

“Banners were set up in every street and bore the names of cadres from the areas to promote the leadership of the actor. It was a shift from the time when AIADMK promoted only J Jayalalithaa, while DMDK was promoting a whole new movement, focusing on the cadres,” he says.

A way of life for Tamilians

Tamil cinema’s promotion has been heavily dependent on the banner culture, despite several changes in the strategies using different mediums, including social media. From milk blessing (paal abhishekam) of posters and cutouts of actors like Rajinikanth, to giant size banners of the current crop of actors like Ajith, Vijay and Suriya ahead of film releases, the banners have symbolised adulation to the degree of worship by the fans.

Karthikeyan Damodaran, who has a doctorate in South Asian Studies/Sociology, the University of Edinburgh and a visiting fellow, Centre for Modern Indian Studies, Georg-August-Universität Göttingen, talks about how the shift is, with the general public picking up the baton to keep the culture alive. He points out that technological advancement in the field saw the displacement of manually painted banners and plywood cutouts to mechanically reproduced images on vinyl.

“This change was quite significant as it saw the shifting of the clientele, earlier members associated with political parties and films were the ones who used to install banners and cutouts. The mechanical reproduction saw the proliferation of consumption and now as it is, vinyl flex boards are used for almost every occasion starting from wedding to ear piercing and puberty rituals and by people from all walks of life as a form of advertising and propaganda,” he adds.

Jeevananthan observes that the flex culture in the 2000s made it extremely popular among the masses. “It took the art from the hands of the artists to entrepreneurs, who engaged in competitive pricing for it. At Rs 7-10 per square foot, it became affordable and easily accessible for all,” he explains, observing that such a transfer deprived the art form of aesthetics.

“While drawing it and painting it by hand, the artist would be aware of the concept of distance and visibility of the subject on the hoarding. With the clients also contributing with their own ideas, the eye for aesthetics is missing. Earlier, a movie banner or a political banner would garner a lot of attention. Today, no one cares for a banner,” he said.

Today, a banner can be made within an hour, says S Yuvaraj, treasurer, Tamil Nadu Digital Printers Association. “They are a win-win situation for both the makers and clients.”

This ubiquitous nature of the contemporary visual culture in its vinyl board form made it impossible for authorities to curtail down such practices.

“The death of Subhasri is a result of such an invasive visual culture promoted by politicians to showcase their loyalty towards their leadership by indulging in such visual extravaganza,” said Damodaran.

An extension of parai culture

A practice that was widely spread in villages, the use of parai or the drums were essential instruments used as a medium to spread news or announcements among residents.

Professor S Sumathi, head of the department of anthropology, University of Madras, says that the cut-out and banner culture stems majorly from this practice.

“The bigger the cut-out or size of the banner, more people see it and more visible the subject became. Just like how the beat on the drum or parai grabbed the attention of people around and they paid attention to the message being conveyed, the size of these cut-outs and banners gave them the much needed visibility. In a multi party setup, they have been vying for space in order to make an indelible mark in the minds of the people,” she said.

Professor Sumathi compared the practice to the Ganesh Chathurthi celebrations in Mumbai. “There the size of the Ganesha idol displayed in the pandal makes them assert their significance in the city. It is the same thought process when one political leader or the fans of a cinema star chooses to go for the towering or larger than life cut outs,” she adds.

“Such a culture has been looked at with wonder and disbelief. I have had students from abroad wondering how we allow destruction of our infrastructure — digging holes on the road for accommodating banners,” she says.

She also questions the significance of such banners in the changing times.

But banners for political parties is just 10 per cent of the work, says Yuvaraj.

“There are people who take to them to spread message of their celebrations to the ones living in and around the locality. Even in the age of WhatsApp and social media, they want to continue with it. It should be regulated rather than being banned entirely. The government should possibly allot areas for this and encourage online booking of the spots for the public,” he adds.

Dhuraisamy wonders if the banner culture can yield any benefit or amplify popularity today. “It is highly questionable if anyone else can pull off what Vijayakanth did with banners some 14 years ago. It has outlived its purpose,” he says.

As Adani wins makeover bid, a quick guide to ...

6:30 AM, 2 December, 2022 0
Over the past 15 years, the Maharashtra government made at least four attempts by floating bids for the slum redevelopment; however, the bids never materialised. Finally, the project is all set to take off now