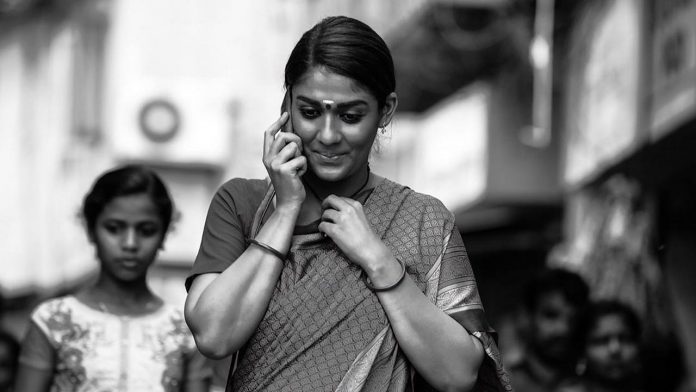 Nayanthara is the reigning queen of Kollywood. She once took a break to take a stab at married life and when that didn’t work out, Nayanthara came back to the film world. After her return, she seemed surer, more in control. As if to mirror that change, she has excelled in roles that have put her at the centre of the film, so much so that male roles are often secondary in the film. The audience seem to want to support her and those movies have been successful, too.

Her personal life has been turbulent, to say the least. And at a recent film function, actor Radha Ravi seemed to want to praise her but ended up slurring her. He said actors these days do diverse roles whatever their real life is. And pointedly recalled her playing Sita in a film, which she did in Sri Rama Rajyam in 2011.

Initially, Radha Ravi’s vitriol evoked little or no response from the film fraternity in Kollywood, unlike in neighbouring Mollywood where such slurs are not taken too kindly. But Nayanthara decided to fight. She asked why a Visaka committee could not be set up in the film industry to inquire into such situations and ensure justice is done. She publicly thanked MK Stalin when he suspended Radha Ravi from membership of the DMK.

Airaa, which released on March 27, shows that film producers continue trust Nayanthara’s star value and her ability to play the main character in a film. Though the movie’s plot has many twists and turns, her poised handling of her character has once again proven that a female protagonist can steer a film without a conventional hero prop. Airaa sticks to the time-tested horror-comedy genre but stumbles a bit when it comes to maintaining the curiosity quotient in the script.

Nayanthara’s journalist character Yamuna is in search of YouTube viral videos that could fetch her fame and cash. She takes a break from work and travels to her grandparents’ home. The makers switch to soothing night shoots and peppy background scores. The chilling effects add an edge to the well-handled camera.

The clichéd wind keeps whispering to announce the arrival of apparitions and ghosts. But the flitting between past and present, incorporating a flashback, is easy on the viewer.

The first half feels easy and faster but the second is bogged down by too many events that the director has tried to incorporate. An even flow could have delivered a balanced package. The mix of humour and horror is engaging despite Airaa being longer than usual.

Kalaiyarasan (Amudhan) amply supports the build-up and works out of Chennai to factor in the reasons behind the upheavals and mystery deaths all around. Amudhan figures out why Yamuna bears the brunt of some inexplicable force and is at the receiving end. After a doze of clairvoyance, astral projection, and spirit porting, the climax heaves to a happy ending.

Expectations were a tad high as director Sarjun had made the much-acclaimed short film Lakshmi. This could be one Nayanthara movie which could stir up a wave after her hit Aramm.

On a finer note, there is a butterfly that spins in an out of the frames which portends the coming and going of good and bad times. The butterfly flies around as the film ends. Nayanthara who has been around for some 15 years may continue to glide around with bright, bold colours for many more years to come.

‘An example for daughters’: Union...

Confusion over status of Iran’s moralit...