On January 17, 2017, lakhs gathered in several parts of Tamil Nadu, including the iconic Marina beach in Chennai, after the Supreme Court banned Jallikattu, a traditional bull-taming sport popular in the state, to protest against the ban.

The week-long protests came to an end after the state assembly amended the Prevention of Cruelty to Animals Act, allowing various forms of bull-taming sport, including Jallikattu, Manjuveratu, Yeruthuveratu, to be held.

Capturing the protests at the Marina beach and the sequence of events unfolding, a film titled Marina Puratchi (Marina Revolution), directed by first-time director MS Raj, who assisted director Cheran and Pandiraj, is soon set to hit the screens in Tamil Nadu.
Even though the film was successfully screened in several foreign countries, including Norway and Canada, the film hit a roadblock in India after People for Ethical Treatment of Animals (PETA), an animal rights group, issued defamatory notices to the director over his statements against it.

Following this, the Central Board of Film Certification (CBFC) in Chennai denied its certification. Even an appeal filed before the review committee failed to get it clearance.
Raj then approached the Madras High Court, which ordered the board to certify it, which it did in May this year.

After nearly a year-long battle, Raj is now waiting for dates from the theatres to screen the Marina Puratchi for Tamil audience.

In an interview with The Federal, Raj says Marina Puratchi will reveal shocking truths about the Jallikattu protest and the subsequent violence unleashed on people.

Here are excerpts from the interview.

What is the idea behind Marina Puratchi?

The biggest protest (in Tamil Nadu) till date was the Anti-Hindi agitation. In the last 50 years, I have not seen such a mass gathering and it triggered a curiosity in me to know the reason behind it. And Marina Puratchi has come out as the answer to all those questions.
In the film, two characters are shown searching for the answers and it will reveal shocking truths about the protest. It will serve as a time machine that would lead people again to the protest field.

Does your film also explain caste issues revolving around Jallikattu?

Jallikattu is assumed to be a sport being played by a particular caste. But it is wrong. In the early stages, the sport had been common for everyone. But after a certain period of time, the sport is going into the hands of the people with money, land and power.

But still, I have not registered this Jallikattu protest as the protest that was organised only for Jallikattu. Jallikattu is just a symbol and with the symbol, people gathered here to show their years of oppression by the ruling class. 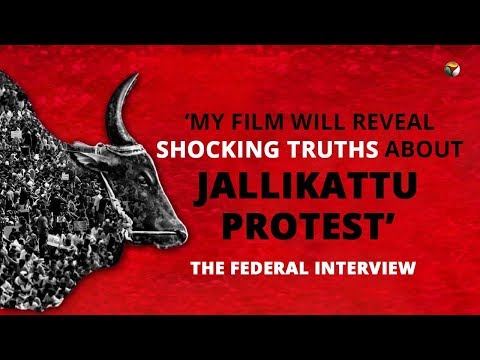 Do you believe Marina Puratchi was a true revolution?

There is a perception among people that if people protest for the bull, it is not a revolution. The French revolution and the Russian revolution alone are not revolutions.

The ruling party and the courts bring a ban that you should not play a sport. Subsequently, people voluntarily took to the streets and they protested not just for one day but for eight days. The protests were not just limited to Tamil Nadu but in 31 countries. This is a true revolution.

Revolution does not mean subverting the state alone. The Marina revolution has created a sense of fear among the ruling people that people would once again rise and protest. There is a ban on mass gathering in the Marina beach and that itself is an acknowledgement that the Marina protest was a true revolution.

What were your issues with the CBFC and what was their expectation?

Why was CBFC so stiff in rejecting your film and what is the controversy in the movie?

Well, the CBFC could not accept the truths that are shown in the movie. Though people in the state believe that it was PETA who was behind the Jallikattu ban, it is not true. Actually, two people in important positions in Indian politics have sincerely worked to bring the ban. Apart from the duo, a heroine and a Union minister have also worked to bring the ban on Jallikattu.

But the CBFC could not accept that we are showing all these truths. I had evidence to prove it, but the CBFC were not even ready to look into it. CBFC is not looking into films as an art. They certify it only if the film does not have anything against the central government.

Do you feel that the voices of the intellectuals in the film industry are being throttled by the central government through the CBFC?

For them, films alone are not a problem. The voice of dissent itself is a problem. They do not want to hear dissenting voices. It is not just limited to art, but to all other fields including journalists. But they are scared about cinema as it would reach a much wider audience. Though freedom of speech is guaranteed in our constitution, it is still in papers only.