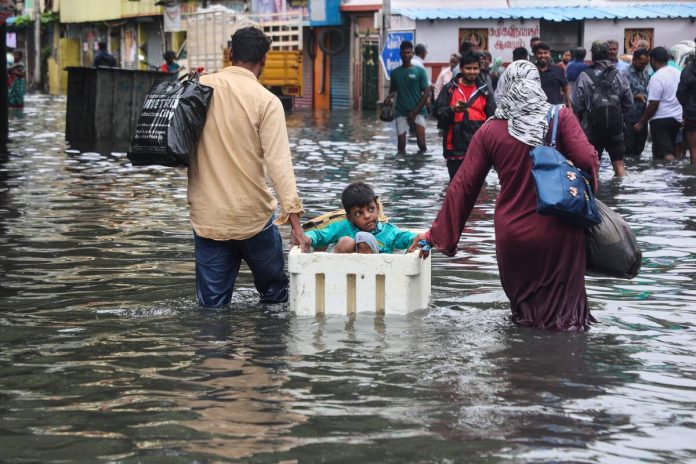 Battered by heavy rains over the last two days, Tamil Nadu and parts of Kerala and Andhra Pradesh are set to experience more rains in the coming five days.

Since the beginning of northeast monsoon in October, Puducherry and Tamil Nadu have received 43% excess rainfall while Chennai got 26% more rains. The state capital got over 20 cm rainfall in 24-hour period.

“In the past 24 hours, Chennai recorded heavy to very heavy rain and it is expected that the intensity will be slightly less today. A low-pressure area will be formed in the Southeast Bay of Bengal on November 9. It will also form a depression towards the Northwest & centralise on the northern Tamil Nadu coast on the morning of November 11. It’ll decrease on November 12 when this low-pressure area travels towards the west. The fishermen are advised to return by November 9,” said Director General of IMD, Dr Mrutyunjay Mohapatra.

As per instructions of Tamil Nadu Chief Minister M K Stalin, schools and colleges in the state capital and 22 other districts remained closed till further review. The CM also asked companies in Chennai to grant one-day leave or permit employees to work from home. All government offices, except those providing essential services, will remain closed. Four teams of National Disaster Response Force (NDRF) are active in the state.

Prime Minister Narendra Modi spoke to Stalin earlier on Monday to take stock of the situation and extended all possible help. Stalin told the PM that Tamil Nadu has exhausted the State Disaster Relief Fund for 2020-21 towards COVID-19 relief and requested more help from Centre’s National Disaster Relief Fund.

The CM visited rain-affected areas in Chennai for the second day on Monday and distributed relief materials and food to the needy in Royapuram, Perambur, RK Nagar among others.

Community kitchens have been set up in 15 zones of Chennai and 3.36 lakh food packets have been distributed. The Chennai Municipal Corporation has brought over 500 pumps to pump out water from subways and water-logged areas. Greater Chennai Corporation Commissioner Gagandeep Singh Bedi said that Chennai recorded 20 cm rain which has choked the drainage lines.

Nungambakkam received 21.5 cm rain in a day, the highest recorded in rainfall a 24-hour period since 2015.

Taking a cue from the 2015 floods — when sudden and excessive discharge of water from Chembarambakkam lake in Chennai led to flooding in 4 lakh houses — the municipal corporation has started releasing water the Chembarambakkam lake. The NDTV reported that the 85.4 feet-high lake now has water till 82.35 feet.

The Hindu reported that the Adambakkam police station had to be temporarily moved to a new location following waterlogging.

Educational institutions were closed due to incessant rains in Puducherry on Monday.

Puducherry, which has been receiving rains since the onset of the north-east monsoon, registered 6.1 cm rainfall during the last 24 hours ending 8.30 am on Monday. Karaikal registered 4.8 cm rainfall in the same period.

The territorial government has declared a holiday for all schools and colleges on Monday and Tuesday. Home Minister A Namassivayam had on Sunday announced that the government had decided to postpone the reopening of schools (scheduled for Monday for students of standards one to eight) in view of the incessant rains.

In Madurai, a swelling Vaigai river has resulted in local authorities closing Kalpalam road along the river bank on Monday.

Meanwhile, a flash flood on Kodaikanal hill in Dindigul district resulted in flooding in several nearby areas.