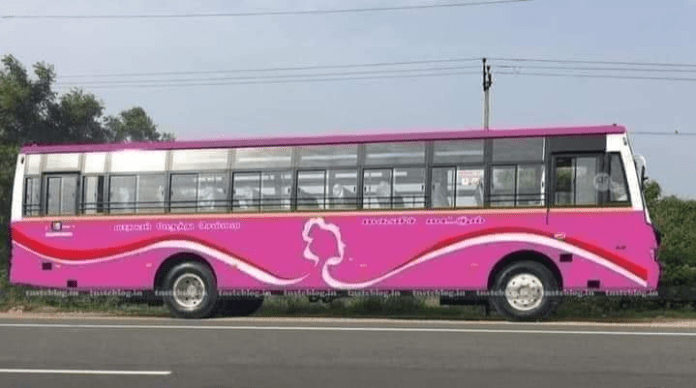 Colouring the regular (non-luxury/deluxe) buses pink will help women spot them from a distance. Pic: Twitter

Over the past few months, the Tamil Nadu government has been looking to ease the daily commute for women with missionary zeal. A key step has been increasing the budget allocation for this under the transport department.

Last July, the state transport department rolled out a scheme that allowed women to travel with ‘free tickets’ in ordinary city/town buses. This increased the footfall of women on Metropolitan Transport Corporation (MTC) buses from 40% earlier to 61% over the past year, official data revealed.

Transport Minister SS Sivasankar recently said: “In the past one year, more than 132 crore have benefitted from this scheme and the state government sanctioned around ₹1,600 crore as subsidies to various state transport undertakings including MTC to implement this scheme effectively.”

Stating that Tamil Nadu was the first state to implement such a scheme, Sivasankar told the New Indian Express that the scheme seeks to implement social justice. “The scheme has liberated women from the clutches of poverty and deprivation. Flower sellers or daily wage workers have got the independence of leaving home for a job without worrying about travel expenses,” he said.

Due to these schemes, every woman travelling for work using state buses is able to save roughly ₹1,000 a month and use it for their family expenses, the State Planning Commission revealed in a recent study.

Taking the initiative forward, the MTC is painting ordinary buses pink. The logic is stunning in its simplicity.

The transport service largely runs three kinds of buses — ordinary, express and deluxe. The free travel scheme for women is applicable only on ordinary buses. However, spotting such buses is difficult, as the markings are not always identifiable, especially from afar. Many women have gotten confused due to this and entered express or deluxe buses and paid the fare, which is much higher than ordinary buses.

“Many ordinary buses don’t have stickers on the front windshield, or they are not legible. So, many times women end up boarding the express or deluxe buses and paying for the tickets,” said a schoolteacher quoted by Times of India.

Colouring ordinary buses in pink will help women spot them from a distance. In the initial phase, MTC will be launching the pink buses on select routes next week, and based on the response, the scheme will be expanded.

Debt situation to be improved

Even as the Tamil Nadu government showers subsidies on the transport sector, the various corporations under the department are reeling under huge debts, especially since the COVID lockdown and the scare of pandemic spread that have forced people to opt for private vehicles over public transport.

Sivasankar said the government will do everything possible to bring back the commuters to buses but it may take some time to reach pre-pandemic levels.

“The per-day patronage is yet to reach one crore. The sales of two-wheelers increased many times during COVID lockdown, particularly in rural pockets. Registrations of second-hand cars also went up. We will do everything possible to bring back the commuters,” he told the New Indian Express.

On the debt situation of the transport corporations, he blamed it on the mismanagement of the AIADMK government between 2011 and 2021. “After discussing with the CM, we are planning to take some concrete steps like route rationalisation, to enhance the earnings,” he said.

The Transport Minister also said that the government is planning to push up hiring.

“We have just started distributing appointment orders to kin of deceased employees on compassionate grounds. The proposal for new recruitment has been sent to the Finance Department for approval. The number of vacancies is yet to be finalised and we will ensure that appointments are carried out transparently,” he said.

The department has also decided to double the incentive amount given to conductors, who have to lose out on account of the free travel scheme offered to women. (Conductors get incentives for selling tickets, and the ‘free tickets’ are not lucrative.)

The government has even agreed to several demands of the transport staff, including COVID special pay of ₹300, promotion for 1,078 supervisors and increase in allowances, according to an official release.