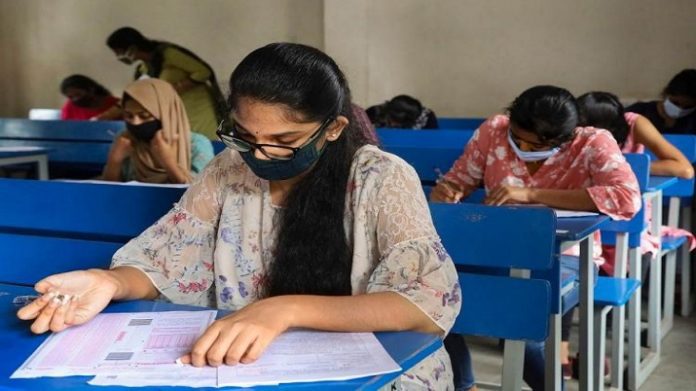 The state government has however advised students to go ahead and prepare for the exams. Pic: PTI

Though extending its support for the Bill, the Opposition party AIADMK walked out of the Assembly following a war of words between Chief Minister MK Stalin and the Opposition leader Edappadi K Palaniswami.

The Bill has been drafted based on the recommendations made by the Justice AK Rajan committee, which was formed by the DMK government to study the impact of NEET in June 2021. Stating the objections and reasons for passing such a Bill, the government has said that “NEET is not an equitable method of admission”.

A detailed study, whether the NEET based admission process has adversely affected the social, economic and federal polity and rural and urban poor students, those who studied in government schools, those who studied in Tamil medium or any other section of students in Tamil Nadu, was undertaken by a high level Committee, said the government report.

Further, the report said, “…and the Committee in its finding has reported that the NEET has clearly undermined the diverse societal representation in MBBS and higher medical studies, favouring mainly the affordable and affluent segment of the society, while equally thwarting the dream of pursuing medical education by the underprivileged social groups.”

In one of its recommendations, the Committee had suggested the state government may pass an Act, similar to the Tamil Nadu Admission in Professional Educational Institutions Act, 2006 (Tamil Nadu Act 3 of 2007), indicating the need for elimination of NEET at all levels of medical education and get the President’s assent for the same.

Also, the Committee further pointed out that the extra examination students were compelled to take, other than the qualifying examination had caused a huge financial burden on the students from socially and economically backward classes.

NEET does not improve standard of medical education: Govt

Students who are not able to pass the university exams are not awarded degrees. Therefore, the standard of medical education is not maintained by an entrance exam, asserted the government in its report. Claiming that the higher secondary syllabus in the state is of a “sufficient standard”, the government said if the marks are adjusted through a normalisation method, it would provide a fair and equitable method of admission.

“Admissions to medical education courses are traceable to entry 25 of List III, Schedule VII of the Constitution of India. Therefore, the state is competent to regulate the same on behalf of the under-privileged social groups,” the government added.

Developments on NEET between two Bills

The NEET was passed in the Parliament on August 2016 and was introduced in Tamil Nadu the same year but it was exempted following the state government’s opposition. Before the NEET, the state had admitted students based on their Class 12 Board exam marks.

In that year the NEET was conducted. Meanwhile, a Dalit student S Anitha, from Ariyalur district, who impleaded herself in a case filed against NEET at the Supreme Court died by suicide on September 1, after the court’s order had turned unfavourable. According to the Union government’s deposition on July 2019 to the Madras High Court, after the President “withheld” the assent, the authenticated copies of the Bill were sent back to the state on September 22, 2017.

Her suicide stirred up a storm among political parties in the state, who reacted strongly against the exam. Thirteen students between 2017 and September 2021 had taken the extreme step of ending their life because of fear of the NEET exam and the results.

Meanwhile, in an RTI reply, it was revealed the number of Tamil medium students from government schools who enter medical colleges witnessed a 90 per cent drop. In 2015-2016 (before the introduction of NEET), a total of 456 students joined state-run medical colleges.

In 2016-2017 (when NEET was introduced in the country but Tamil Nadu was exempted) the number of students joining medical colleges stood at 438. In 2017-2018 (when Tamil Nadu took the NEET exam), the number fell to a mere 40 students.

Due to the series of suicides and the sharp decline in the number of Tamil medium students joining state-run medical colleges, the state government introduced free NEET coaching classes in 412 centres in 2018. Subsequently, the number increased to 88 from 40 in 2018-2019. But it may be pertinent to add that the number shot up since the number of candidates attempting NEET has been increasing every year.

The NEET became an issue in the 2019 Parliamentary election and the then ruling AIADMK- led alliance lost 39 out of 40 seats to DMK and its allies. After losing badly to their arch-rival, the AIADMK government passed a Bill to provide 7.5 per cent reservation for medical seats at government medical colleges for the government school students who had cleared NEET in October 2020. This was welcomed by many since more than 400 seats would then go to students from economically weak backgrounds.

Meanwhile, the Union government has already accepted a demand from the state government to conduct the NEET exam in Tamil.

In 2021 state Assembly elections, the DMK promised it will ban NEET. After DMK assumed power in Tamil Nadu, in June, the government set up a committee headed by former judge AK Rajan to study the impact of NEET. In a matter of a month, in July, the committee submitted its report, which has not been made public to date.

Student must prepare till exemption is granted: Govt

The students need a definite answer and should not be left hanging in limbo, said PK Ilamaran, state president, Tamil Nadu Teachers Association.

“Let the government continue its fight but on the other hand it should not leave students in a state of confusion. So, till it gets a complete exemption, the government can find ways to help the students. It can open coaching centres in all the districts and train the students from Class 9 itself,” suggested Ilamaran.

Though the state has upgraded the syllabus to be on par with the CBSE, the National Testing Agency, which conducts the exams, should set the questions that can be faced by any student irrespective of the Board they come from, he added.