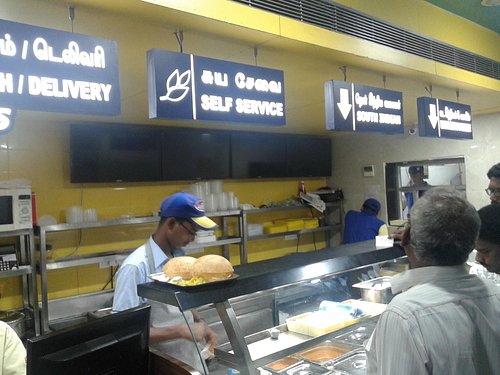 The slump in business, steep rentals and lockdown restrictions are compelling popular restaurant chains to close down some of their branches in Chennai and even across the state

People who frequent popular fast food restaurant chains like Adyar Ananda Bhavan and Hotel Saravana Bhavan may find the nearest branch of their favourite outlet has pulled down its shutters. However, this may be a temporary phenomenon as lockdowns, slump in business with drop in footfalls and high rentals have compelled these restaurants, who depend on high turnovers to run their reasonably priced eateries, to shut shop in certain areas in the city.

The drop in customer footfalls, steep rentals and lockdown restrictions have caused signature Chennai eateries like Adyar Ananda Bhavan and Hotel Saravana Bhavan to close down some of their branches, said a New Indian Express report.

Quoting K T Srinivasa Raja, the MD of Adyar Ananda Bhavan, TNIE report said that they had to close down the branches for which they had to pay huge rentals. “In Chennai alone, we shut down three branches,” he told TNIE. But the report added that the chain has closed nearly seven or eight branches across the state.

The restaurant chain however hopes to open these branches once the business picks up in the state. But this is not the case with other restaurants, who had to permanently close down due to the lack of business on account of the extended lockdown. Only the ones who found it financially feasible to run their restaurants continued to keep them open, said the Tamil Nadu Hotels Association President M Venkadasubbu in the report.

The upcoming Deepavali and Dussehra festival season offers some hope for these restaurants to get back on their feet. It helps that Tamil Nadu has finally recently relaxed its lockdown rules allowing restaurants to be open until 10 pm. Meanwhile, the hotel business has been gaining traction since people want to hold functions like weddings in hotels rather than in marriage halls.

To overcome this crisis brought on by the COVID pandemic, hotel and restaurant owners have asked the government to lower the GST on rentals, sweets, and savouries from 18 per cent to 5 per cent. Secondly, they wanted the government to increase the number of attendees allowed during events in hotels and lastly, they are demanding for an industry status for restaurants and hotels.