As many as 2,092 residents of Chennai’s Sathyavani Muthu Nagar are relieved as the state government has accepted their demand to vacate their residence after the board exams in May. The locality, which is on Cooum River’s path is lined up to be evicted. 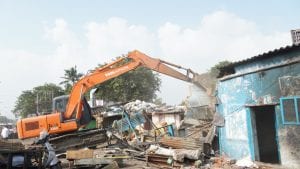 However, few residents along with activists staged a protest demanding the government to let them stay there till May.

Meanwhile, corporation officials claim they held talks with residents before starting the eviction drive. Officials also said that they had convinced the school students on Saturday night that their studies will not be effected.

Despite the promise, residents protested seeking more time to vacate the locality. However, police lathi-charged the residents and took three people in custody including two CPI(M) workers. The eviction process has been the largest drive-in Chennai so far. The whole exercise will take a fortnight, where 150 families will be rehabilitated every day. 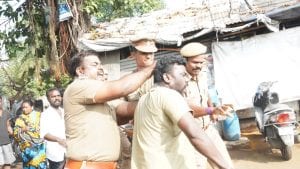 As the news of eviction spread, political party leaders including CPI(M) state secretary K Balakrishnan, Viduthalai Chiruthaigal Katchi (VCK) leader Thol. Thirumavalavan visited the spot. Authorities, sources say, decided to postpone the eviction after Thirumavalavan spoke to the deputy Chief Minister O Panneer Selvam. However, Corporation officials denied getting any such order, but confirmed that the drive will resume only after further orders.

Few residents to whom The Federal spoke to said that they have been residing here for nearly 50 years and moving from the place would affect their livelihood. According to the plan, the residents will be relocated to Perumbakkam, where they will be provided houses by the Tamil Nadu Slum Clearance Board.

Rajinikanth heads to US for medical check-up: Reports