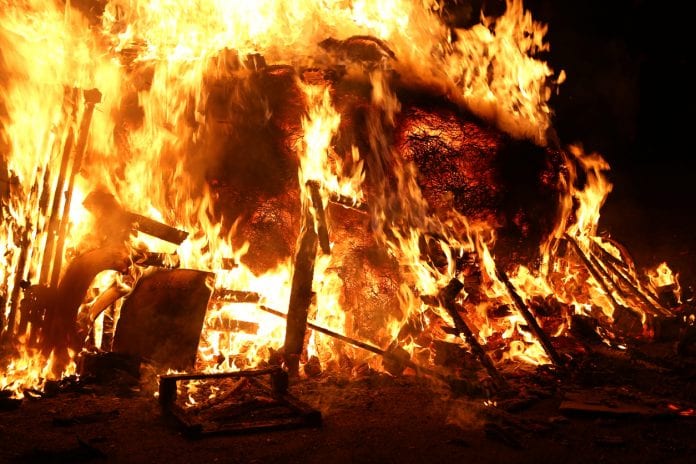 The murder of a former panchayat president’s brother has sparked tensions leading to clashes and arson in Tamil Nadu’s Cuddalore district. 43 people involved in the violence were held by police on Sunday (August 2).

The incident occurred on Saturday at 10 pm in a fishing hamlet called Thazhanguda after 36-year-old Madivannan, brother of former village panchayat president was hacked to death by a 10-member gang when he was riding back to Thazhanguda from Cuddalore in his two-wheeler.

Enraged by the murder, supporters of the deceased took to arson and engaged in violent clashes with the rival gang that allegedly murdered Madivannan. At least 20 fishing boats and two-wheelers of the rival gang were set ablaze by miscreants and some even reported 10 houses burning as firefighters desperately tried to throw sand and put out the fire.

Witnesses said that the miscreants fled the area after torching the properties.

Police sources said the long-standing rivalry between families of former and current panchayat president in the panchayat elections was the root cause of the attack.

After a delay of more than three years, local body elections were held for panchayat unions only in most parts of Tamil Nadu in December 2019.

Superintendent of Police M. Sree Abhinav and Deputy Inspector General of Police (Villupuram Range) K. Ejilearassane rushed to the spot and brought the situation under control, The Hindu reported.

Around 200 police personnel have been deployed for security in the area following the violent clashes, according to NDTV.

43 men involved in the riot were detained by the police and 200 policemen have been deployed in the area additionally for security.

US to send Ukraine longer-range bombs in late...