Despite BJP and Hindu outfits call to boycott products from the shops of atheists, Muslims and Christians for Diwali, people in Tamil Nadu have extended their full support to these communities.

Weeks ago, Karappan Silks owner, Karappan, who is a staunch follower of Dravidian icon Periyar, participated in a Dravidar Kazhagam outfit’s meeting in Coimbatore. In the meet, he allegedly criticized the Hindu gods – Aththivaradhar and Krishna.

Days after the meeting, the video of his speech went viral and subsequently, he had to apologise saying he didn’t mean to hurt the sentiments of Hindus.

ALSO READ: SC order to have safe Diwali of no avail, Sivakasi crackers are anything but green

Similarly, Hindu outfits in the Delta region and in deep southern districts, have also been vigorously campaigning to boycott Christian and Muslims shops, who denied entry for  Ganesh Chathurthi procession through their streets.

In a poster put up by the Hindu outfits in Sivagangai district – incidentally a native of H Raja – it was stated that “Don’t buy goods from the shops of the Muslim and Christian people who are rejecting the Hindu religion processions (through their street Nehru Bazaar). Purchase from Hindus shops and improve the livelihood of the Hindus.” 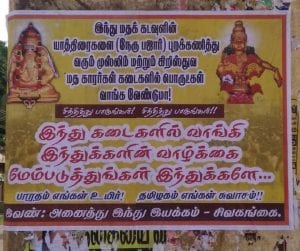 However, people in all these regions are believed to have rejected the BJP and Hindu outfit’s call to boycott.

Speaking to The Federal, Karappan, Karappan Silks owner, said that his business that would rake in thousands have got a huge response from the people resulting in an increase in the sales. “The sale is now happening in Lakhs,” he said.

Meanwhile, the Communist Party of India (Marxist) State committee member K Kanagaraj slammed the BJP and Hindu outfit that the Sangh Parivar group in the State had never stood by what they say.

“While the Prime Minister quotes Kaniyan Poongundranar’s Yathum oore poem in US, here they seek boycott of the Muslim and Christian shops. They know it would not work out.

But, they are just diverting the main issue of the economic slowdown. However, few innocent shopkeepers may believe that BJP is talking for them, but the BJP themselves know, it would cause a big problem in the future,” Kanagaraj said.