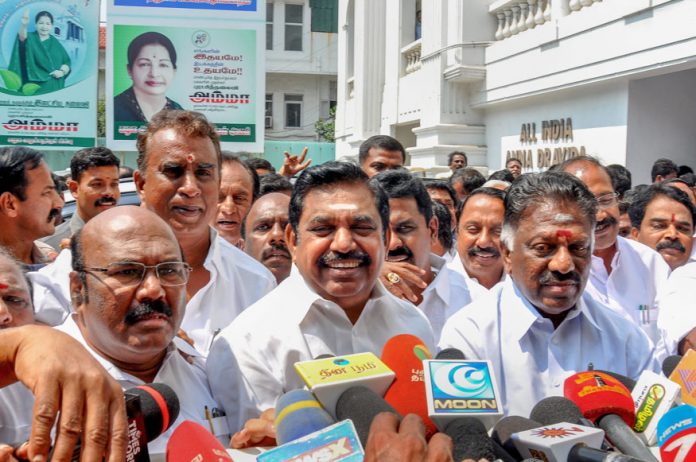 AIADMK leaders O Panneerselvam and K Palaniswami on Monday (May 27) thanked the people of the nine Assembly constituencies where the party won the bypolls, saying the victory allowed the “good government” formed by the late J Jayalalithaa to “stay.”

The voters, by preferring the AIADMK in the nine of the 22 Assembly constituencies where bypolls were held, besides giving the party the lone Theni Lok Sabha seat, have
ignored those who had “betrayed” the party, the two leaders said.

The ruling AIADMK’s fate hinged on the outcome of the elections to the 22 seats, vacancies for which were caused due to reasons including the disqualification of 18 pro-Dhinakaran AIADMK MLA’s who revolted against Chief Minister Palaniswami in 2017 for merging his faction with that of Panneerselvam. Panneerselvam was then heading a rebel faction.

Thanking voters for casting their ballot in favour of the AIADMK, its Coordinator Panneerselvam and Joint Coordinator Palaniswami said party founder, the late MG Ramachandran, and Jayalalithaa, had always treated peoples verdict equal to that of Gods.

“Crores of voters had voted for the party candidates as well as nominees of our allies in the just concluded Lok Sabha polls and the Assembly bypolls.”

“Especially, this good government formed by Amma has stayed on only due to the victory handed to the party in Sholinghur, Pappireddipatti, Harur, Sulur, Nilakottai, Sattur Manamadurai, Paramakudi and Vilathikulam Assembly seats,” they said in a statement.

The nine seats added to AIADMK’s kitty of 114 MLA’s in the 234-member House, giving it a comfortable majority. The simple majority number is 117. In an apparent reference to rival leader TTV Dhinakaran, presently heading Amma Makkal Munnetra Kazhagam
(AMMK), the AIADMK leaders said people have “ignored” those who “betrayed” their party. Dhinakaran and his alliance had fielded nominees from all the Lok Sabha constituencies, even as his AMMK had faced the by-polls to all 22 Assembly seats.

However, it drew a blank in the hustings. Panneerselvam and Palaniswami further said the party’s lone win in the Lok Sabha polls from Theni will help the AIADMK raise its voice in the lower House of Parliament. They also directed party workers to embark on a
campaign to thank voters, both by way of door-to-door as well as public meetings, starting June first week.