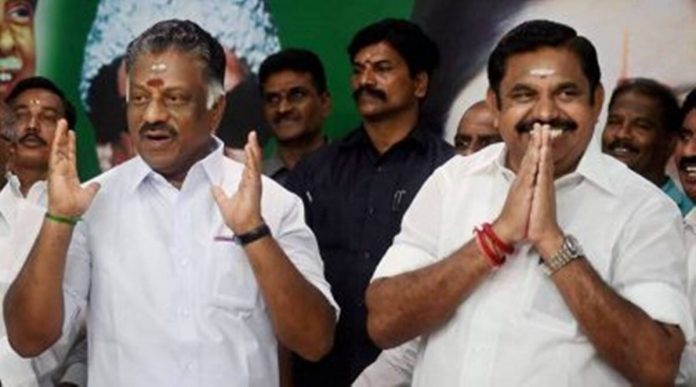 The AIADMK's coordinator and co-coordinator will be elected by the party cadres through a single vote. Pic: PTI

This key amendment was made at the AIADMK executive committee’s meeting held today (December 1). As per a special resolution passed in the meeting, and which has been adopted, the party coordinator and party co-coordinator will henceforth be elected by the party cadres through a single vote.

“Accordingly, the rule 20 (A) Section 2 is amended”, said the resolution.

“These amendments come into force with immediate effect and the consensus will be received in the next general council meeting,” said the resolution statement.

Interestingly, this move comes in the wake of a slew of setbacks faced by the party such as cancellation of the 10.5 per cent reservation for Vanniyars and the Madras High Court’s ruling quashing the acquisition of former CM Jayalalithaa’s Poes Garden residence Veda Nilayam to convert it into a memorial.

“The current leadership of the party may have feared the Court may also strike down the amendment made by the party in 2017. So, they have changed the rules again,” said KC Palanisamy, former AIADMK MP.

It was KC Palanisamy who objected to these amendments and impleaded himself in the case pertaining to allocation of the Two Leaves symbol in the Delhi High Court.

Hearing the petition, in the 2018 order pronounced by Justice Sistani, he had observed that “the change in nomenclature of the posts may not amount to much, but the change of electors definitely disturbs the constitution of the party”.

When the Election Commission decided to allot the Two Leaves symbol to O Panneerselvam and Edappadi K Palanisamy faction, it said that the amendments made in the bylaws would be taken up in due course of time.

According to Palaniswami, the AIADMK fearing court intervention has brought in this new amendment in which the cadres have got their rights back. “This emphasises that the leaders should be picked by the primary members of the party: the cadres,” he stressed.