Actor-turned-politician and Makkal Needhi Maiam (MNM) chief Kamal Haasan on Monday (December 28) listed out 17 services for which bribes are allegedly taken in government offices – from the issuance of birth and death certificates to the registration of land and police verification for passport. 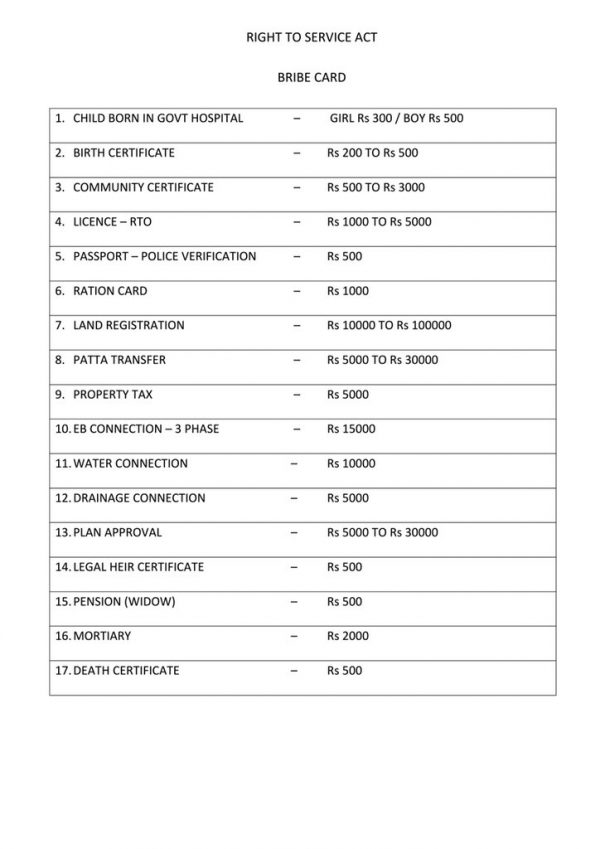 Titled ‘Bribe Card’, the document lists out certain government services against the alleged bribe amount demanded to avail them. According to the list, officials allegedly demand a bribe of ₹300 for girls and ₹500 for boys if a child is born in a government hospital. The birth certificate costs between ₹200 and ₹500. The bribe amount for community certificate ranges between ₹500 and ₹3,000, while that to issue a driving license is between ₹1,000 to ₹5,000. For police verification for passport ₹500 is allegedly received as bribe, while ₹500 is charged to issue a death certificate.

“It is interesting that bribes are received largely from men than women. Can anybody refute this list? Or forget? Or hide it?” said Kamal while addressing reporters.

He said a third front headed by MNM will be formed ahead of the upcoming Assembly elections in the state.

“We are happy to see that we get more support from women. If MNM comes to power, we will provide computers to each household and try to create a paperless electronic administration,” Haasan added.

Actor Shruti Haasan says she is ‘glad’ her parents separated