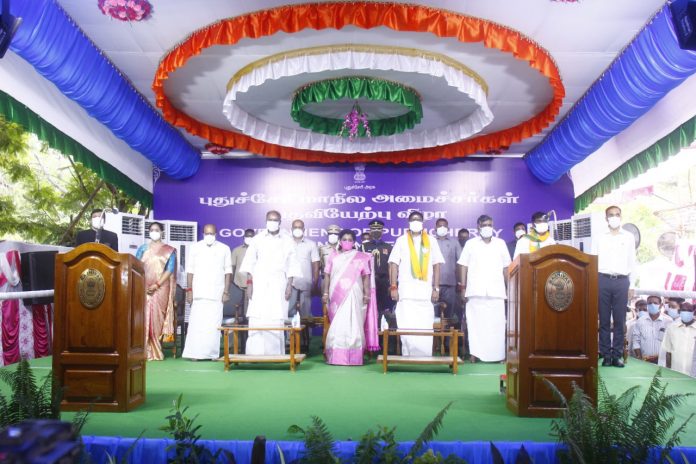 Puducherry Governor Tamilisai Soundararajan administered the oath of office to the new ministers, and the total strength of the ministry stands at six. Pic: Twitter

Five MLAs — including two from the BJP — took oath as Ministers in Puducherry on Sunday. This came 50 days after N Rangasamy took charge as the Chief Minister of the Union Territory (UT), and marks the first time that the BJP is becoming part of a government in Puducherry.

The swearing in came after the NR Congress and the BJP concluded their long-drawn-out power sharing talks last week. Governor Tamilisai Soundararajan administered the oath of office to the new ministers, and the total strength of the ministry stands at six.

The two BJP leaders in the new Puducherry government are A Namassivayam, who had quit the Congress ahead of the Assembly polls, and Sai J Saravanan Kumar. The three newly sworn in NR Congress leaders are K Lakshminarayanan, C Djeacoumar and Chandira Priyanga, who will be the first woman minister in the UT in about 40 years.

The BJP had forged an alliance with the NR Congress when the ruling Congress government headed by V Narayanasamy collapsed with the exit of a group of MLAs. The rebel MLAs joined the BJP.

The NR Congress-BJP alliance won the poll and Rangasamy took oath on May 7 as Chief Minister. Soon afterwards he contracted COVID and was admitted in a Chennai hospital.

Later, too, the UT did not get a cabinet as the allies could not reach an agreement on the split. The BJP had initially demanded the Deputy Chief Minister’s post, which the NR Congress was unwilling to spare. Finally, on June 16, the BJP was given the Speaker post, which Embalam R Selvam bagged.