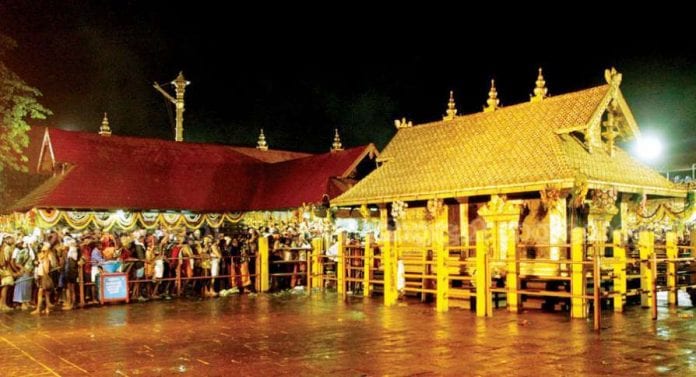 The Congress in Kerala seems to be backing out of its promise of bringing a law to “protect Sabarimala” if they are voted into power. No Congress leader, except the man behind the draft – Thiruvanchoor Radhakrishnan – is promising to uphold the commitment that the UDF would criminalise the entry of women of menstruating age into the holy site.

Congress leaders, including KPCC president Mullappally Ramachandran, say that the party has not discussed the matter yet; and that the draft has been prepared by one individual.

The Congress released the three-page draft law, named the ‘Sabarimala Ayyappa Devotees (Protection of Religious Rights, Customs and Usages) Act, 2021, a few days ago with the intention of putting the LDF on the defensive. Section 4 of the proposed law stipulates two years’ imprisonment and fine for women in the age group of 10-50 who violate the custom by entering the temple. The draft invoked huge debate and caused fierce protests from progressive people.

“What the Congress is offering is something practically impossible. No government can make a statute that is ultra vires [an act that requires legal authority but is done without it] to the Constitution,” said Advocate Kaleeswaram Raj, an expert in constitutional matters and lawyer at the High Court of Kerala. “Though the review petition is yet to be decided, the judgment that allowed women of all ages to enter Sabarimala does still exist. It is under the consideration of a larger bench and not yet cancelled or repealed,” he said.

“We are bound to protect the religious sentiments,” Radhakrishnan, former revenue minister in the UDF government, told The Federal. His draft law asserts that there are provisions enabling the government to make the law. “We have precedence. What Tamil Nadu has done in the jallikattu issue is an example.” Apart from asserting that the party would explore legal options to protect customs, Radhakrishnan could not explain how the UDF would make a law that would be ultra vires to the Constitution.

However, no one else in the Congress stands by the draft law as of now. “It is prepared by an individual [Radhakrishnan]. We have not discussed it collectively,” MM Hassan, former president of KPCC, told The Federal.

He also stated that there would not be penal provisions. “This has not been discussed within the UDF. This scenario arises only when we are voted to power. We will certainly avoid penalising provisions if we go for an enactment,” he said when asked how this law would be different from Modi government’s decision of penalising triple talaq.

Earlier, Mullappilly Ramachandran also told the media that there is no collective decision on the same. John Samuel, the recently appointed chief of the public policy wing of KPCC, said he does not want to comment as he does not want this controversy to go on. However, he wrote a Facebook note saying he does not agree with the penal provisions suggested in the draft bill. “The draft is only a draft. The party’s position will be announced in the manifesto only,” he wrote.

The CPI-M, meanwhile, does not want to fall into a “trap” and raise the issue ahead of the elections. However, the party has dismissed the UDF’s claim of bringing in a law to protect the customs in Sabarimala. A Vijayaraghavan, the acting state secretary of the party, said the Congress is fooling people by making such false claims. “First of all, they are not going to come into power. Secondly, no one can enact a law on a matter that is under the consideration of the larger bench of the Supreme Court. It is also very clear that the Congress does not stand for gender justice,” said Vijayaraghavan.

Even the Nair Service Society has dismissed the Congress’ offer. “It is only an eye wash. Everyone knows it,” said G Sukumaran Nair , the general secretary of the NSS. The organisation for the Nair community raised stiff resistance when the LDF government welcomed the judicial decision allowing women to enter Sabarimala.

In 2018, a 4:1 majority bench of the Supreme Court struck down Rule 3 (b) of the Kerala Hindu Places of Public Worship Act, 1965, which prohibited women of menstruating age from entering Sabarimala temple . The Supreme Court has found that the rule is a violation of the constitutional mandates that provides right to equality and right to worship. Bringing back a custom by law, which has been struck down by the Supreme Court for being ultra vires, is practically impossible. It seems that the Congress leaders have started realising it.