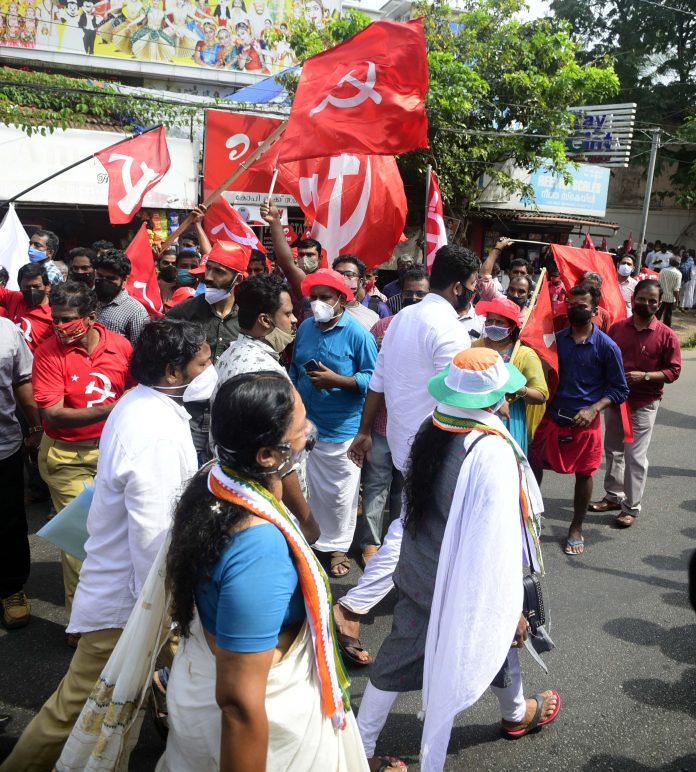 Voices of dissent are echoing in the Congress-led UDF and BJP camps in Kerala following the embarrassing debacle in the recently held local body elections which saw a massive LDF victory.

The squabble in the Congress has come out in the open with many within the party going loud against the current leadership. K Muraleedharan, MP and son of late Congress leader K Karunakaran, has openly called for ‘self-reflection’ for the party’s leadership.

He sharpened his attack by mocking KPCC president Mullappally Ramachandran for his statement that “UDF has not lost its base.” “He (Ramachandran) says the patient is very healthy, but needs an urgent surgery,” he jibed. Scorning at the leadership, he added there is a chance to “save the patient, if the surgery is done at the earliest.”

He further criticised the ‘political affairs committee’ of the party as a few people sitting together and discussing, while excluding the majority.

MLA and AICC Secretary Shanimol Usman also warned that the workers of the party would question the leadership. “While leaders continue back scratching each other, the ordinary people in the party would go against them,” said Shanimol, further asking what has the leadership done other than conducting daily press conferences that didn’t spark any mass interest.

Another Congress MLA, VD Satheeshan, went a step ahead to say that the party may convene a meeting to analyse its defeat after the Assembly election.

A couple of Youth Congress leaders too came out in the open, expressing displeasure against the leadership. There were disputes within the party regarding the selection of candidates and the way the leadership used to function without considering the requirements at the local level. On the very next day of the result, posters turned up in several places demanding a reshuffle in the leadership.

Party insiders opined that many of the actions and strategies planned by the leadership went wrong. The street protests during the time of COVID against the government keeping least regard to pandemic protocol seems to have back-fired. There are many within Congress and UDF who think that many of the statements made by Mullappally Ramachandran and Ramesh Chennithala were unnecessary and untimely. A Congress leader said the scornful name-calling of Health Minister KK Shailaja – ‘Covid Rani’ and ‘Rock dancer’ – have back-fired worse than the party could foresee.

On the other side, there are storms brewing in the BJP too. “When everyone went after gold smuggling and Swapna, the government went after development,” said O Rajagopal, former Union minister and veteran BJP leader in Kerala. However, he did not completely agree with party chief K Surendran’s claim that there has been widespread cross-voting between LDF and UDF that caused the debacle for NDA. He said that’s not the only reason, and that it is a reality that the party did not perform up to the mark.

The existing rift between state leaders has come out in the open by the unexpected defeat in the local body elections. Sobha Surendran, a sharp tongue of the party on television floors, has demanded the central leadership to remove Surendran as state chief of the party. Former chief P K Krishnadas too has echoed the demands of a reshuffle in the leadership.