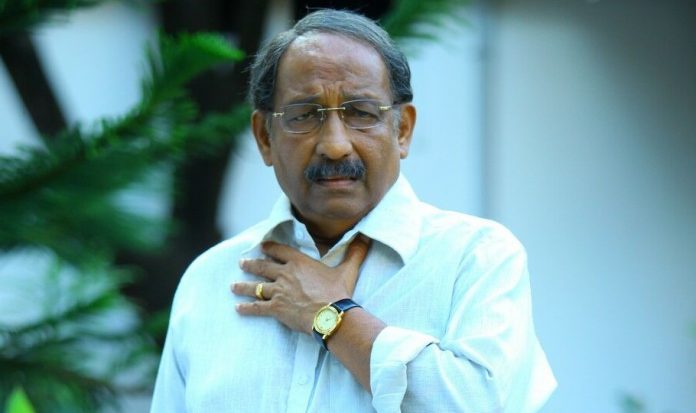 Nedumudi Venu, rated as one of the most talented actors in Indian cinema, died at a private hospital here on Monday, film industry sources said.

He was 73. He is survived by wife and two children.

Recovered from COVID-19, Venu had been unwell for quite some time and was admitted to the hospital after he complained of uneasiness.

Shifted to the ICU, his condition worsened on Sunday despite efforts by doctors. He breathed his last on Monday afternoon.

His most memorable performance that established Venu as a talent in Malayalam cinema was in “Thakara”-a 1979 Malayalam-language drama film directed by Bharathan and written by Padmarajan-in which he played the role of a village carpenter.

He never had to look back after that. The versatile actor handled a series of character roles bordering on humour.

In his film career spanning over four decades, Venu acted in over 500 movies as hero, villain and character actor.

His unique style of acting and talent made him one of the finest actors in Indian cinema.

According to film scholar N Balagopal, Venu was one of the few actors in Indian cinema who excelled both as stylized actor and realistic actor which in Indian theatre tradition is called Natya Dharmi and Lokadharmi respectively.

Venu put up stellar performances in films scripted and directed by P Padmarajan such as Kallan Pavithran and Oridathoru Phayalvan by displaying exceptional performance exploring the inner persona of each character, Balagopal said.

In his late 30s and early 40s, he acted as a 70 plus year-old man in many movies earning him recognition in the film world.

Born in 1948 in Nedumudi in Alappuzha district, Venu performed in dramas in his college along with Fazil, who later emerged as an outstanding film director.

Seeing their performance in a drama competition in their college, Kavalam Narayana Panicker invited them to join his experimental theater group.

He also displayed his talent in playing several musical instruments and his recital of Malayalam poetry is legendary in the southern state.

A recipient of national and state film awards, Venu adorned notable roles in Mohanlal-starred movies such as His Highness Abdullah and Bharatham.

Venu also directed and did a pivotal role in one of Malayalams early tele serials “Kairalivilasam Lodge” produced for Doordarshan.

“Ente Mazha” directed by Subrahmanyam was his last movie.

His cremation will be held here tomorrow.

The Governor said, he was “deeply grieved by the demise of Venu, one of the finest actors in Malayalam and Indian cinema.”

“Profound knowledge of traditional art forms & Indian style of acting reflected in his unique performances. Well versed in Keralas classical and folk art and rhythm, #NedumudiVenu also excelled in theatre and in recital of Sopana Sangeetam. His was a life devoted to art. My heartfelt condolence. May his soul attain Mukti,” Khan tweeted.

In his condolence message, Chief Minister Vijayan said that the demise of Venu, was an irreparable loss to the cultural world.

Describing Venu as a gifted actor who crafted himself a permanent position in the minds of the audience through his various roles, the Chief Minister said even while acting in movies, he took a keen interest in literature and took initiatives in everything from folk songs to experimental theatre.

He said the folk songs sung by him will remain etched in the minds of the people forever.

“The versatile actor has also captured the minds of many in other South Indian languages too,” the Chief Minister said.

Leader of Opposition, V D Satheeshan said the actor showed his talent not only in acting but in music and musical instruments as well.

“Shocked and saddened by the demise of icon of Malayalam film industry Shri Nedumudi Venu. One of the finest actors who was versatile in his roles. Condolences to his family and well wishers,” former Opposition leader Ramesh Chennithala said.

BJP state chief K Sudhakaran said the demise of Venu was an irreparable loss to the Indian movie industry.

“We lost one of the most talented actors in the country. It was a proud moment for all Keralites when he bagged two national awards. He acted in more than 500 movies in Malayalam and Tamil languages,” Surendran said.

Writer N S Madhavan tweeted “Immensely sad day. Knew #NedumudiVenu when he was this Down pointing backhand index young. He and Fazil had a repertoire of skits and mimicry items and were in great demand in and around Alappuzha. Those were happy, unemployed days! A man with not an atom of malice in him. Great actor. Adieu.,”.

Actor Prithviraj Sukumaran bid farewell to the actor and said his expertise in acting would be a research material for coming generations.

“Farewell Venu uncle! Your body of work and your expertise over the craft will forever be research material for generations to come! Rest in peace legend! #NedumudiVenu,” Sukumaran tweeted.

“The legend is no more Rest In Peace #NedumudiVenu sir . a kind person and a great teacher . Will miss u sir,” Tamil composer, actor, producer and singer G V Prakash Kumar tweeted.

Actor Khushbu Sundar said she was deeply saddened to hear about the demise of a great legendary actor Nedumudi Venu.

“Not only was he a great actor but also a wonderful human being. Had the honor of my husband directing him in one of his films. Will miss him. May his soul rest in peace. #RIP. Tweeted,” she posted in her twitter handle.

Cinematographer and film director Ravi K Chandran said Venu was one of the most talented and popular actors of Malayalam cinema. “No one can replace him,” he said.