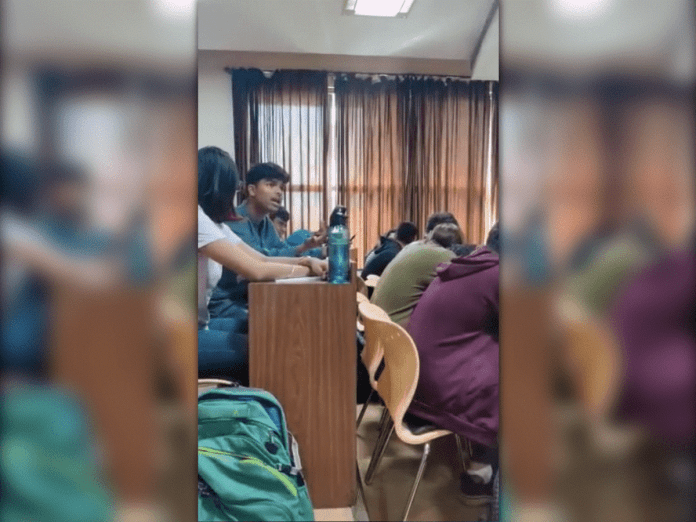 When the professor tried to brush off his remark as a joke, the student hit back, saying, "Being a Muslim and facing this everyday in this country is not funny."

A professor at the Manipal Institute of Technology (MIT) in Manipal (Udupi district), who purportedly referred to his student in his classroom as ‘Kasab’, the Lashkar-e-Taiba terrorist involved in the 26/11 attack in Mumbai, has been suspended.

The professor was also brutally trolled by netizens for what they felt was his “shocking”, “bigoted” behaviour.

An enquiry team has been formed to probe the incident.

The student concerned,  who had called out the teacher in the classroom itself for the comment, however, said he sorted out the matter with the professor after the latter apologized to him. In a WhatsApp post, the student said that a stray remark, meant as a joke, cannot be used to judge the identity of a human being.

“Hello everyone, all of you must have seen a video going viral where a student is telling his teacher that racist comments are not acceptable. The reason behind this was him calling me by an unacceptable name, ‘Kasab,’ one of the biggest terrorists this country has ever seen. It was a joke, which cannot be considered a valid enough reason to question the identity of a human being,” the student said.

“However, I had a conversation with lecturer and realized that he genuinely meant that apology, and we as a student community must let it go as a genuine mistake. I understand what was happening in his head behind this and would like to believe he didn’t mean it. It came across wrong from a teacher, a person we admire, but it can be ignored this time. Thank you for standing with me through this. It means a lot,” the post said.

The incident took place on November 25, when a professor at MIT, after hearing the name of a student, had purportedly commented: “You are like Kasab”. His comment irked the student, who slammed the professor for making such a comparison, and his emotive tirade, which was recorded and leaked online, went viral.

A Professor in a class room in India calling a Muslim student ‘terrorist’ – This is what it has been to be a minority in India! pic.twitter.com/EjE7uFbsSi

“How can you pass such statements?” asked the student with righteous anger. When the professor tried to brush off his remark as a joke, the student hit back, saying, “Being a Muslim and facing this every day in this country is not funny.”

“26/11 incident was not funny… being a Muslim and facing such all these comments every day is not funny. You cannot joke about my religion in a derogatory way. How can you label me as a terrorist in front of everyone in the class?” asked the student.

Though the professor apologised and tried to pacify him, the student refused to back down and told him, “Sorry alone will not help, sir. You are a professional, and sorry doesn’t change how you think or how you portray yourself.”

When the teacher told the student that he was like his son, the student stood his ground and retorted, “Will you talk like that to your son? Will you call him a terrorist? How can you call me like that in front of so many people? This is a class, you’re professional, and you’re teaching. You can’t call me that.”

Meanwhile, after the severe backlash on social media, MIT has ordered an inquiry into this incident and debarred the professor from giving classes till the inquiry is over. “We would like everyone to know that the institute does not condone this kind of behaviour and this isolated incident will be dealt with following the laid down policy. We are proud to have a vast diversity on campus and are committed to upholding constitutional values of treating everyone alike,” said the statement.

This controversial video of the incident is now going viral on social media and the public is criticising the professor’s mindset.