The Ministry of Information and Broadcasting on April 16 issued a show-cause notice to Public TV in Karnataka, for reportedly airing ‘fake news’ claiming Prime Minister Narendra Modi is going to shower money from helicopters in every town.

This was in the context of a show that tried to explain ‘Helicopter Money’, the term which has been in news recently after Telangana CM KC Rao asked the RBI to use the said method to boost the sagging economy.

Helicopter Money is an unconventional method where the central Bank gives money to the government to improve money circulation in the system targeted towards boosting the economy in crisis times.

While the video was not available on the channel’s website, the screengrab of images shared on social media titled “Will Modi shower money from the helicopter?” were available.

However, it is not yet clear if the channel actually said Modi will shower money as claimed by the Ministry.

“Your channel, instead of creating awareness and educating the public, (is) spreading false information, creating panic and social unrest,” the notice said.

In view of the violation of the Cable Television Networks (Regulations) Act, the notice was directed to the channel’s MD HR Ranganath asking why the channel should not be taken out of air immediately.

Previously during demonetisation, the channel had run a news report on the new ₹2,000 having nano-chips, which was also dismissed as fake news.

Public TV could not be reached for comments. 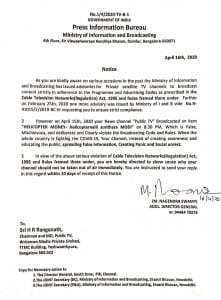