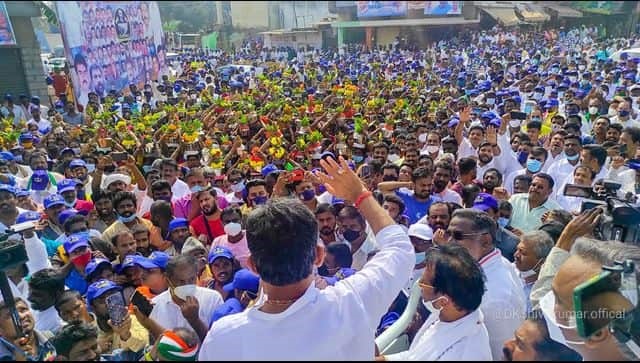 On the first day of the Mekedatu march: Unperturbed by the threat of arrest, Karnataka Congress President D K Shivakumar even challenged the government to book more cases. Pic: Twitter

Local police have registered FIRs against Shivakumar, leader of the Opposition Siddaramaiah and others for violating curfew orders during the launch of the padayatra on Sunday. A day ahead of the march, the Home Minister Araga Jnanendra, who called the padayatra as a “politically motivated” move, had in fact warned that cases will be booked under the State Disaster Management Act against all those who were found violating the COVID-19 weekend lockdown.

Despite an alarming surge in COVID-19 cases and amid a slew of restrictions and curfew imposed by the government, thousands are participating in the padayatra. This has caused concerns over the event turning out to become a COVID super spreader. The Congress unit in the state however seemed adamant and has dug in its heels to continue the padayatra at all costs.

Reacting to the development, Karnataka Chief Minister Basavaraj Bommai told reporters that anybody who violates the law will face action. On asked about arrests, he remarked that now that cases have been registered, whatever needs to be done next as per provisions will happen automatically.

Meanwhile, DK Shivakumar seemed unperturbed by the threat of arrest and even challenged the government to book more cases. The Congress leader, who is widely being seen as aiming for the CM’s chair ahead of the next state assembly election, wanted to share lists and photographs of thousands of people who had participated in the march with the government.

Earlier in the day, Shivakumar also stubbornly refused to be tested for COVID-19 and castigated the health officer who wanted to administer his test saying that he had walked 15 km that entire day. “It is shameful for Chief Minister Basavaraj Bommai to indulge in such tactics to scuttle the padayatra. Let him (CM Bommai), Home Minister Araga Jnanendra and Health Minister K. Sudhakar take COVID tests,” he said, adding with bravado that he could carry the Home Minister on his shoulder and walk, according to media reports.

“I know my rights”, he said, refusing to get tested. He also tweeted that he was getting immense support for the padayatra and ready for day 2 of the 90 km padayatra.

Day 1 of #Mekedatu Padyatra brought immense support from the people, and recharged with this outpouring of love, we are ready with Day 2.
Unstoppable until our goal is reached.#NammaNeeruNammaHakku pic.twitter.com/XHtnBMTXcp

Further, he also told the health official, “Rey mister, I am fit and fine. You can’t compel me. I know the law of this land. Tell your ministers I am fine. I won’t give my sample for testing,” said Shivakumar, reported news websites. His party colleague and former CM Siddaramaiah, who developed fever, however had returned to home base in Bengaluru.

On the second day of the padayatra, the Congress is expected to cover 15 km from Shivakumar’s native place Doddalahalli to Kanakapura. The protestors are expected to reach Kanakapura by night.

The padayatra however seemed to have struck a chord among the people of the state. Many villagers greeted the Congress leaders with flowers and gave them a warm welcome. The leaders even danced with folk dancers along the way.

Meanwhile, Jagadish Shettar, BJP MLA and former CM said that this padayatra has a “political intention”. “If they are good leaders and a responsible Opposition, they should hold talks with the government on how to protect the interests of the state, and should give constructive suggestions,” he said, urging people to adhere to the rules, and not to create confusion by violating COVID norms.