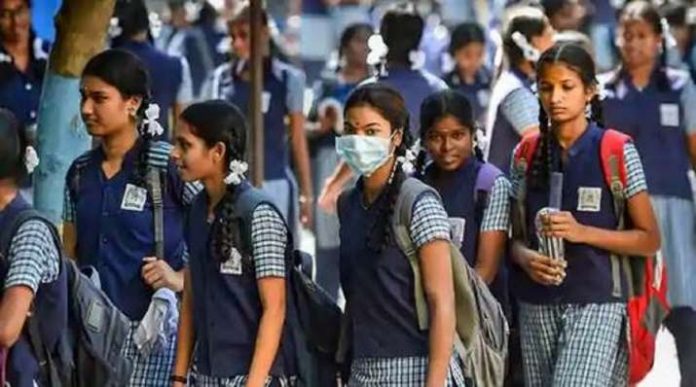 The government will decide on reopening junior classes after studying the COVID situation. File Photo: PTI

Karnataka and Tamil Nadu on Friday (August 6) decided to reopen schools and colleges for classes 9 to 12.

Schools and PUC colleges (9th to 12th) in Karnataka will restart from August 23 with classes to be held on alternate days. On the other hand, the M K Stalin government in Tamil Nadu too has decided to open schools and colleges for classes 9 to 12 from September 1.

The Karnataka government has said that a decision on resuming classes 1 to 8 will be taken after taking stock of the pandemic situation.

The announcement was made by Chief Minister Basavaraj Bommai after a meeting with the COVID advisory committee and other senior officials.

Talking to the media in Delhi, the CM had said: “We have to tighten our borders. We have to make compulsory COVID testing and vaccination the norm”. The new CM said further strengthening the state’s health infrastructure is his priority. “We need to take measures to further strengthen our health infrastructure. The priority is to stop the spread of the disease,” he said.

While the positivity rate for the day stood at 1.10 per cent, the case fatality rate (CFR) was at 1.40 per cent. Out of 25 deaths reported on August 5, five are from Bengaluru Urban, Belagavi, Dakshina Kannada and Kolar 3, Mandya, Mysuru and Udupi 2, followed by others.