With the lack of mobile phones and other forms of technological support hampering the education of students in far-flung areas, teachers in districts like Koppal, Gulbarga, and Chitradurga reached out to students to teach at their doorstep.

The government schools’ teachers travel to remote villages in their respective workplaces (talukas) to teach students of all classes in public areas of the village (temples, community centres, below trees).

Every morning, Veeranna Rao and eight other staff from the Government Higher Primary School in Okali in Kalaburagi travel a distance of 5-20 km to visit different villages and teach students of different classes, all together, for three hours every day, from 10:30 AM to 1:30 PM.

The teachers consulted officials from the education department and convinced parents that they would take all precautions while teaching the students.

“Most of them are poor and cannot afford smartphones. So we teach them as the schools remain shut and we do not want to lag behind,” Rao said. “We formed eight village centres and we use common spaces near students’ homes. Each centre will house 15-20 students.”

He said they even take masks and hand sanitisers for students, thereby teaching them about health safety during the COVID-19 pandemic. Rao also said the teachers found it to be just like going to school every day.

“Instead of walled structures, we now work in open spaces. Though the government asked us to opt for working from home, we wanted to help the students now, otherwise it would become a problem for us (teachers) when schools reopen,” Rao said.

With a spike in COVID-19 cases in Karnataka, the state government ordered schools to remain shut until further orders. The fear of students dropping out of schools if the lockdown continued for long made school teachers look for alternatives.

The Department of Public Instruction conducted a survey and found that 95 percent of households have televisions and hence, resorted to telecast regular classroom instructions on TV. However, getting the students hooked to TV became a concern for many. 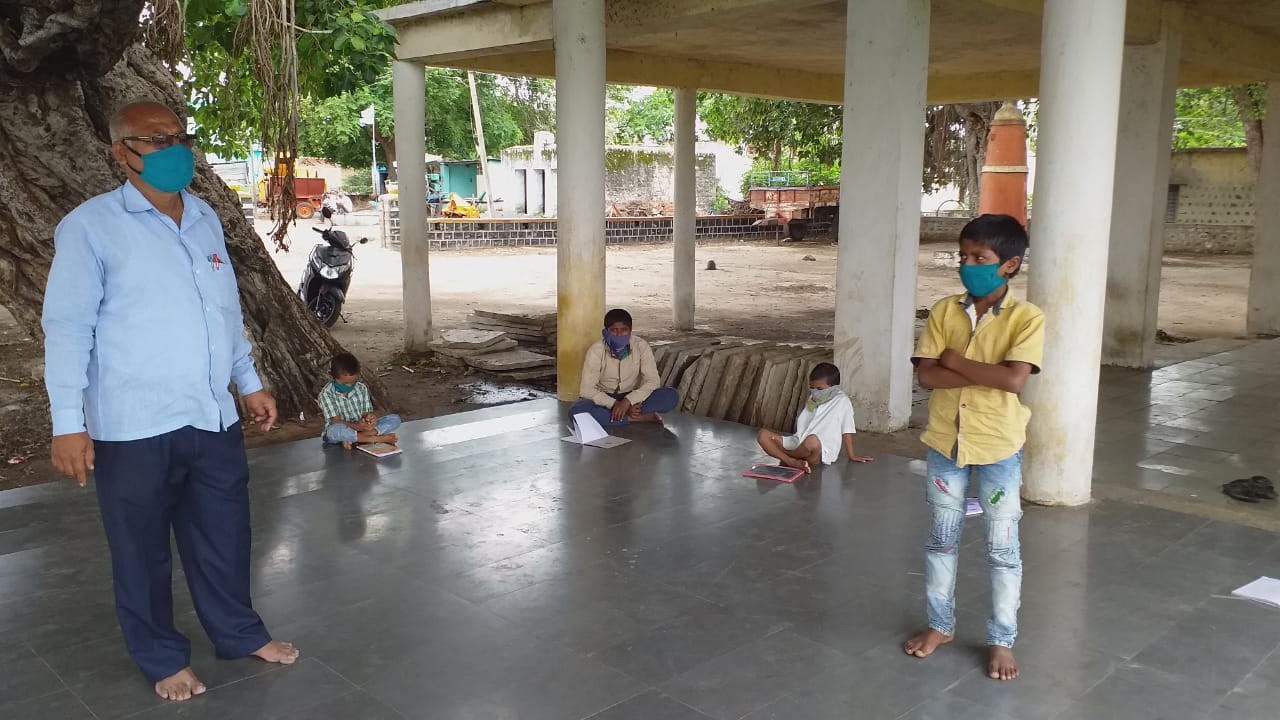 Meanwhile, in Chitradurga, T Yogesh, chief executive officer of the district, resorted to a similar practice. The administration included 12 remote village high schools on a trial basis for the initiative. Depending on the response, he said it would be expanded to more villages. Besides teaching, the school teachers also conduct tests and help Class 10 students prepare for the board exams.

In order to encourage students and avoid boredom, the teachers say they also have story sessions, conduct singing competitions, and play indoor games in between class hours.

M N Machenahalli of the Government Kannada Higher Primary school in Kudarihal, Haveri, said that for those students who had smartphones, they assigned work online and for those who did not possess one, they formed groups and took turns to visit villages to teach students.

Suresh Kumar, the minister for primary and secondary education in the state, took note of the teachers’ initiative and told Rao that they were an asset to the department. He added that their actions set an example for others. “Other schools should follow this model wherever possible,” the minister told Rao over a  telephonic conversation while appreciating their efforts.