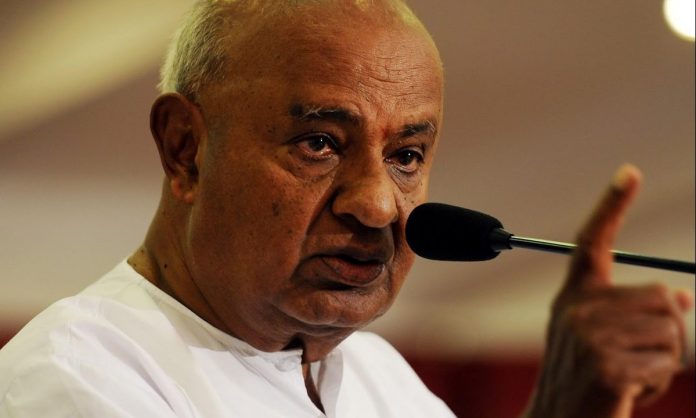 HD Deve Gowda, JD (S) leader has on Friday (June 21) said that mid-term polls will be held in Karnataka without any doubt hinting at trouble in Congress-JD(S) coalition in the state.

The former PM and JDS leader said that the Congress had promised JD(S) support for five years and now their behaviour has changed.

Amid simmering tension between Congress and JD(S) the veteran also stated that till now all the arbitrary demands of Congress were accepted.

Hinting that the partnership was formed under pressure he said, “I was the glue for the coalition in Karnataka. Sonia and Rahul Gandhi sent Ghulam Nabi Azad and Ashok Gehlot to Bangalore. While having a discussion, I told them the pain of the coalition I had experienced before. I told them I don’t need it.”

He also expressed that he was against HD Kumaraswamy, his son being the Chief Minister.

In a totally contradicting statement Karnataka CM Kumaraswamy has moved to doing damage control from his father’s statement and has said Gowda has been misunderstood.

According to reports, the CM said,”Deve Gowda didn’t say mid term polls. He said local body elections. He only narrated how the government was formed back in 2018. This government will continue for next 4 years.”

While Congress too downplayed the accusations of rift in the coalition with Karnataka Congress Congress president Dinesh Gundu Rao saying, “This is his personal statement. He keeps making statements like these but there is no truth in this remark. Deve Gowda should clarify his remark.”

Deve Gowda too later backtracked on his statement and said that he said it for “local body elections and not Assembly elections.”