“I lost everything. It would have been good if the floods had taken us away too,” says Mahadevi, a resident of Chigadolli, a small village in Gokak taluk of Belagavi district in Karnataka. Belagavi is the worst affected district in the rain-battered state. 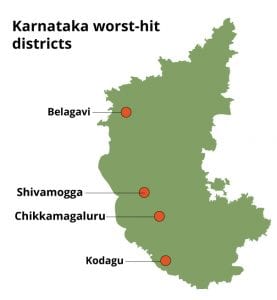 The lives of many, like Mahadevi, have been forced to square one, where they have to rebuild everything from scratch, after heavy rains caused flooding in the region. “Life has come to a standstill. I had one house and I lost that too,” says Mahadevi mournfully. With a two-year-old son to take care, she does not know what the future holds for her.

Chigadolli, with a population of about 1,500 people, rests on the bank of Ghataprabha river. Most of the villagers depend on farming for their survival. Of the 300 houses in the village, approximately 250 of them perished in the floods.

“I have never witnessed such mammoth floods in 50 years. I saw my house collapsing. We had to evacuate the village overnight. We came back after four days, after the water had subsided. But what do we do now?” asks Bhimamma, a farmer, helplessly.

All the houses in Chidagolli and neighbouring Adibetti villages were submerged completely. More than 1,000 people had to be evacuated at midnight. “My husband and I are left with just one pair of clothes each. We have come back after three days and we are left with nothing. We had built our house brick by brick. Now, we are left with just damp walls,” says Bhairakka, who has been living in Chigadolli for 40 years.

The quick rise in water levels left many in the lurch. No one saw it coming. Bala Sarkar, a medical representative who works for Altius Pharmaceuticals in Belgavi city, was assigned to work in Gokak when the taluk was being battered by heavy rains.

“I got sales collection worth ₹1.5 lakh for the day, kept it in a locker at home and left for work the next day. By the time I reached my village, there was water everywhere. I swam for 3 km to reach my house. Now, I have lost my house, all that cash, and two acres of farmland,” he said.

Since farming is the primary occupation of the people in the region, the agricultural loss comes as a huge blow. Kilos of rice, jowar and sugarcane have been thrown on the roads as the harvest is useless now. “The grains are stinking; even animals cannot eat them. We have just thrown everything out on the road,” says Sarkar.

Though there are relief camps after every 10 km in the district, people think that the government can only do so much to help them get back on their feet. “How long will they give us shelter and food? For now, more than the government, locals from across the state are helping us,” says Jayawant Siddappa, who is in a relief camp in Khangoan village, which is about 20 km away from Chigadolli. He says people of Khangoan, an area not affected by the floods, have treated the flood victims as their own.

Seventy-year-old Mumtaz, who has a tumour, is in a relief camp with her daughter and granddaughter. She has been living there for 15 days without her medication. “We don’t have any savings and I am very sick. I don’t know when I will go back home. I don’t even know what condition my house is in. When they rescued us, it was 70 per cent submerged. I feel very helpless,” says a tearful Mumtaz.

The community is working as a collective to lift Gokak back on its feet. A group of 350 volunteers and locals are slowly but tirelessly rebuilding what’s been lost. They are cleaning government schools, which were under water for days, temples, government offices and more.

“We are just doing our bit. The best part about this taluk is that people have not lost hope,” says Yashwanth, a volunteer.

Karnataka farmers to take out R-Day ‘tractor march’ despite prohibit...

In the name of the cow, Karnataka’s ordinance slaughters civil liber...