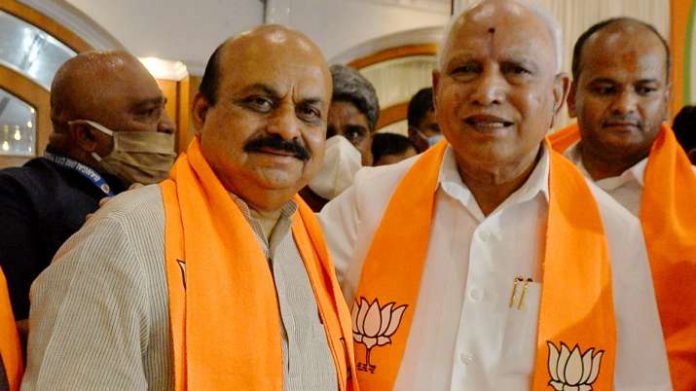 BJP bonhomie? Karnataka CM Basavaraj Bommai with BS Yediyurappa: The former CM is emerging as an alternate power centre in the run-up to the cabinet formation. Pic: PTI

“What have we promised the MLAs who quit Congress, JD(S) and joined us?” That’s the question the BJP high command has asked a close confidante of BS Yediyurappa. This even as Karnataka Chief Minister Basavaraj Bommai is caught up in chalking out a list of probable candidates to be part of his new cabinet.

Seventeen MLAs from the Congress and JD(S) had resigned and brought down the previous JD(S)–Congress government in 2019. Twelve of them were made ministers in BS Yediyurappa’s cabinet. But a majority of them are unlikely to find a spot in the new cabinet. The elevation of Basavaraj Bommai, who joined the BJP just 13 years ago, has caused a lot of heartburn among BJP loyalists and the Sangh leaders.

As a result, the new cabinet is likely to accommodate more “original” party MLAs. Party sources indicate that only 5 to 6 turncoat MLAs will find a slot in the new cabinet. This has already made the turncoat MLAs jittery, while the likes of D Sudhakar and Munirathna have been shadowing CM Basavaraj Bommai ever since his elevation, other defectors have tried to remind BS Yediyurappa and the party about the promise of cabinet berths to be given to them.

“I will speak to Basavaraj Bommai about giving suitable positions to these MLAs, who were responsible for the BJP forming the government. He will also think about it and I will give my suggestions too,” said the former CM, BS Yediyurappa, who is emerging as an alternate power centre in the run-up to the cabinet formation.

Yediyurappa’s aides concede that few compromises were made during the selection of the last cabinet like “not having fair caste and regional representation” which will be fixed this time. But it is likely to come at the cost of the MLAs who had jumped ship from other parties to the BJP.

Party insiders say there is no question of giving preferential treatment to the turncoat MLAs and they will be judged based on their performance and the promise of a cabinet berth is not for perpetuity.

The BJP which is looking at a generational shift in Karnataka too wants to induce fresh faces into the new cabinet, just like the recent Union cabinet reshuffle. Several senior leaders like former CM Jagadish Shettar, former Deputy CM K S Eshwarappa, former minister V Somanna and others might not find space in the new cabinet.

The party is planning to bring in fresh faces which fit into its complex calculations of party loyalty, caste and region. The likes of Karkala MLA V Sunil Kumar and Kudachi MLA P Rajeev who belong to OBC and SC category fit this calculation.

Meanwhile, B S Yediyurappa’s younger son, B Y Vijayendra, is unlikely to be part of the cabinet. While the BS Yediyurappa camp believes pushing for a cabinet berth for Vijayendra will be counterproductive at his juncture, the idea also goes against BJP’s campaign against dynasty politics. Additionally, B Y Vijayendra is not an MLA and there are no elections to the Upper House or by-election to the assembly in the next couple of months.

Over the next one week, Karnataka CM Basavaraj Bommai has to do some tightrope walking trying to kowtow to the party’s plans, keeping B S Yediyurappa’s camp in good humour and managing the expectations of the turncoat MLAs.