Fear grips people in North Karnataka’s Belagavi district as it stares at floods once again after witnessing massive damage in August 2019. Bracing for another round of fury, the people are yet to receive what the state government, led by BS Yediyurappa, had promised then, 10 months ago.

On June 3, tahsildar of Ramdurg taluk in the district issued a letter, warning residents of flood-prone villages. It said, “Your safety is your responsibility.” “According to weather reports, the Malaprabha River might witness floods again. So, as a precautionary measure, we are informing you in prior to vacate your houses and shift to neighbouring villages.”

The letter has caused unrest among villagers in Ramdurg that was the worst-hit taluk in North Karnataka last year. Ashok Chandaragi, the president of Belagavi District Kannada Organisations Committee, says the statement by the tahsildar is irresponsible.

“These villagers haven’t recovered from the last year’s floods. They are already living in shanties. Now, we are in the middle of a pandemic. Which relative will open their doors for these villagers?” he asks.

‘Where is the compensation?’

As part of the relief operation, the state government had promised a string of measures. It had announced a compensation of ₹5 lakh for completely-damaged houses, ₹3 lakh for partially-damaged ones and ₹1 lakh for minor repairs.

While people were supposed to receive the compensation in three instalments, village leaders claim that only one-fourth of the funds have been released so far. Moreover, surveyors had not included the names of villagers, whose houses had completely been destroyed, in the compensation list, they claim.

As many villagers were displaced, the state government promised to release rental compensation of ₹3,000-₹5,000 for families with no shelters. It also assured that ₹2,000 a hectare would be provided for loss of crops.

However, besides releasing cheques worth ₹10,000 each to buy household items, the government had fulfilled none of its promises, villagers claim.

Kilabanur, a village in Ramdurg taluk which lies on the banks of the Malaprabha River, is enduring the misery of the last year’s floods. It has more than 300 houses and a population of approximately 1,000, but only 62 families have received funds to build their houses.

“Of the 62 families, very few have received full instalments. Some have taken loans to reconstruct their houses as they can’t afford rented houses. Some have left the village, while others have moved in with their relatives,” says Prakash Irappa, a resident of Kilabanur.

If one takes a walk in the village, the person either find people living under sheds or in houses which are not worth residing. “We are living here constantly in a fear of thunder, rain and whatnot. Whatever happened has happened,” says Madevi, another resident of Kilabanur.

“As you can see, there is no shelter. I took a loan of ₹20,000 to repair a small part of my house. Only this patch is left for us and seven of us live in this house. Some people have at least received one instalment, I have not even received that,” she says. Ten months have passed and the government is yet to release the promised rental compensation.

Noor Jaan, another villager, says some houses look fine, but the walls are very weak. “They (officials) asked to build houses in a higher platform and we did. So far, they have released one instalment of ₹1 lakh. So far, I have spent ₹2.5 lakh, of which ₹1.5 lakh is the loan amount,” she says.

“I am currently living in a rented house with my family. They have not released the rental compensation as they had promised earlier,” she adds.

Another important issue in the village is that many are age-old inherited houses that lack land deeds. But funds are being allocated only to the houses that have documents.

“It is true that around 774 houses in Ramdurg taluk are yet to receive relief from the state government. I agree that funds must be released as soon as possible,” Ramdurg MLA Madavappa Yadavad tells The Federal

“I don’t think there are enough funds. But, I am not sure about other claims of the villagers,” says the BJP legislator. He adds that some people haven’t built or repaired their houses, despite receiving funds from the government. “People should also cooperate. How can the government take responsibility for everything?” he asks.

So far, the implementation of relief measures in the district have been very chaotic. “There is no proper system here. The government should assign Rajiv Gandhi Housing Corporation (RGHS) to build houses like it did in Kodagu (Coorg),” says Chandaragi. 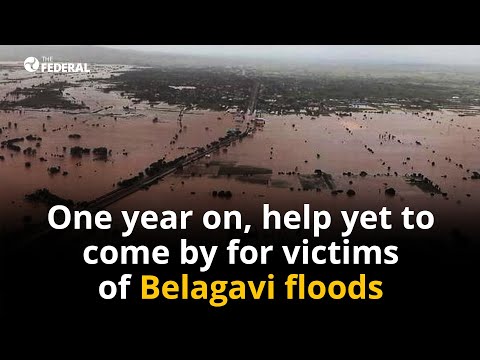 “Recently, construction of 463 houses were completed in Kodagu through the RGHS. As far as floods are concerned, authorities have not taken any concrete step. The state government should have planned this before the arrival this year’s monsoon,” he says.

After heavy rain and water from Koyna dam in neighbouring Maharashtra gushed into the Krishna River in August 2019, more than 250 villages were inundated, 1.12 lakh families affected, over 65,000 houses completely or partially destroyed, 500 km roads ruined and more than 1,000 Anganwadi centres were damaged. Besides, farmers faced the crop loss of 2.45 lakh hectares

As per the data presented to the Chief Minister, Belagavi district alone reported damage of upto Rs 11,000 crore and the State government has spent 867 crore towards compensation.

The Belagavi handloom and textile organisation’s deputy director K P Gotooru had visited his wife and daughter and promised to release a sum of ₹2.20 lakh. He had also promised a job for his wife and donations for his daughter’s education.

Three months ago, Ramesh’s wife Jayashree, who is currently residing in her mother’s house, received a letter from Karnataka Chief Minister’s Office. The letter said that the CM Relief Fund would release a sum of Rs 90,000 for the family. Till date, Jayashree has only received Rs 25,000 from the weaver’s organization.

“All I need is a secured job now. I am living with my parents for 10 months. I am completely dependent on them. Sometimes it feels like we are burdening them. The government has not fulfilled anything it promised. Many authorities visited us and consoled us, but nothing beyond that”, Jayashree says.