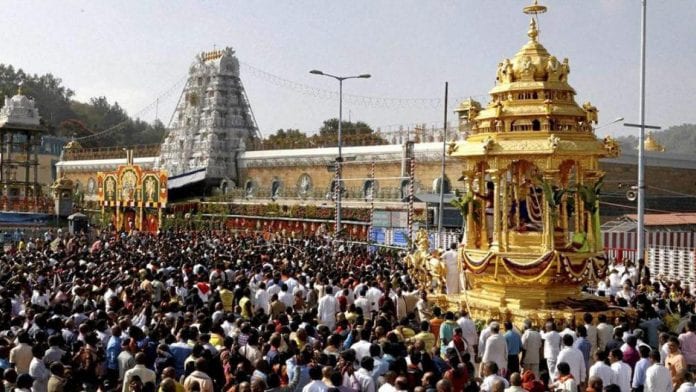 Tirumala, the richest temple in the country, is caught in a paradox.

Despite being the wealthiest shrine with over ₹14,000 crore fixed deposits (FD) and nine tonnes of gold reserves, it is running out of cash even to pay the salaries to its employees and meet other recurring expenditure.

“If the lockdown continues in June, we will be left with no cash to pay the salaries,” said sources in the Tirumala Tirupati Devasthanam (TTD), an autonomous body managing the affairs of the popular hill shrine.

One might wonder why the temple board is reluctant to tap into its vast fixed deposit reserves to tide over the cash crunch.

“We will never do that. It is a question of public sentiment. We are not going to touch either FDs or gold reserves,” TTD chairman YV Subba Reddy said.

The abode of Lord Venkateswara, which in normal times attracts a daily average of one lakh pilgrims from all over the country and abroad, has so far incurred an estimated revenue loss of ₹400 crore due to the coronavirus-induced lockdown.

The temple was closed for devotees on March 19, much before the announcement of the nationwide lockdown and as a result, the TTD has been losing nearly ₹200 crore in revenue every month.

The temple body spends ₹110 crore every month towards payment of salaries to its 22,500-strong employees and contract workers, and for maintenance of temples and security.

“We have paid salaries for the months of March and April. We have some reserves kept ready for paying salaries for May as well,” the sources said.

Asked why temple authorities were hesitant to tap into the fixed deposits to meet the regular expenditure, the TTD chairman said, ”Gold and fixed deposits are given by devotees from all over the country. That is sentimental. Only Hundi and other collections have to go for our expenditures.”

Subba Reddy, who is the maternal uncle of Andhra Pradesh Chief Minister YS Jagan Mohan Reddy, had earlier faced the wrath of the right-wing groups for being a practising Christian. He has, however, denied it and asserted that he is a devout Hindu.

The TTD has imposed a cut by 50 per cent on the salaries of its senior employees while excluding health, medical, and class IV workers. Outsourced employees have been handed out a 10 per cent cut in accordance with a government order.

The temple board has also put a temporary hold on its engineering works with an outlay of around ₹500 crore till the situation improves.

However, a comprehensive development plan would be worked out by the board after May 17, when the third phase of the lockdown ends. The board of trustees are likely to meet by the month-end to discuss the issues.

For 2020-2021, the TTD had presented a ₹3,310 crore budget, with a major chunk of the income expected to come from Hundi offerings which is projected at ₹1,351 crore. About 2.5 crore devotees throng the temple annually.

It has a fixed annual expenditure of nearly ₹2,500 crore under different heads including maintenance of other temples under its jurisdiction, hospitals, free distribution of food for pilgrims and other commitments.

Besides being involved in many charitable activities, the TTD has several educational institutions and health care facilities under its control.

Related News: AP to reduce retail liquor outlets by 13 per cent by May end

Since the imposition of lockdown, the temple authorities have spent almost ₹300 crore on salaries and pensions, and exploring ways to resolve the looming cash crunch without falling back on the FDs and gold reserve.

“Despite severe financial constraints, the TTD would be in a position to manage (full) salary payments to all its permanent staff and outsourced workers, and pensioners for the next two or three months,” the board chairman said.

Though the 2000-year-old shrine remains closed in line with the national lockdown, all rituals are being conducted uninterruptedly by priests.

Earlier, the temple board drew flak following the termination of nearly 1,300 contract workers across several wings of the temple. After the local media highlighted the issue, the authorities issued a swift clarification, saying that the services of all contract workers have been restored.

“The contract entered into by the TTD with the manpower agency which supplied workers ended on April 30. Normally, fresh tenders would have been called by now for awarding of the contract to the agency which bids the lowest amount for manpower supply. Because of the lockdown, the TTD trust board could not meet and finalise the tender,” TTD spokesman T Ravi said.

Following intervention by the TTD chairman, the issue has been sorted out.