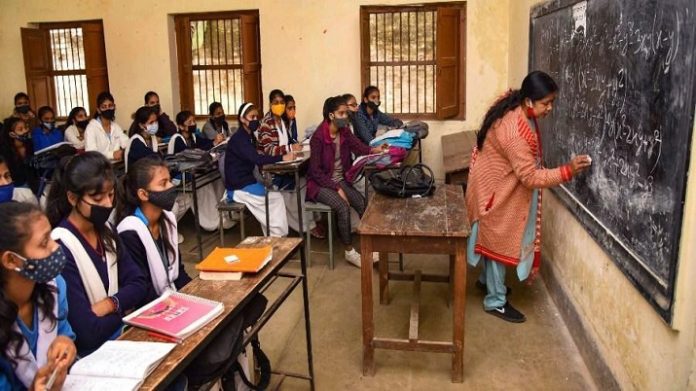 On October 7, 1846, a public meeting was held in Pachaippa’s Hall in Madras (now Chennai). The meeting, organized by the ‘growing public’ that included many Telugus, petitioned the government for a “better English education, free of restraints of religious favouritism”.

The people present at the meeting signed a memorandum that urged the government to introduce a system of English education capable of “making the selection to office dependent on qualification placed within the attainment of us all.”

It was a time when mere learning of the alphabet and a little ability to copy a letter was a sure bet to get a placement in district ‘Kutchery’. And all offices were occupied by family members and relatives of the person who first got a toehold in the office as a copy-writer. The parents’ main concern was to educate their sons in basic English language at home or through private tutors.

Importantly, there was no system for recruitment. All job were filled through personal connections. The offices in Bellary, Anantapur, Nellore, Kadapa, Kurnool, Guntur etc. earned the notoriety of being family enterprises, mostly of Brahmins. People like Vennelacunty Soob Row, who joined this way by learning alphabet at the age of 9 with help from his uncle, could rise to the level of chief interpreter of Madras’ ‘Sadar Adalat’ and later become a member of the Madras Text Book Society. According to historian Robert Eric Frykenberg, who studied the emergence of modern education in South India during the period 1784-1854, as many as 500 English medium schools, claiming to give ‘best English education’, dotted the Mount Road in Madras during that time.

Viewed against this backdrop, the Pachaippa’s public meeting in a way was a revolt of sorts against the system in vogue, which favoured the introduction of universal English education along with job recruitment based on qualification.

After 176 years, the main demand of the memorial signed at Pachaippa’s public meeting i.e. universal English Education, is becoming a reality in Andhra Pradesh.

Andhra was first to be carved into a state on a linguistic basis in 1953. The same Andhra, which is now called Andhra Pradesh, is on way to becoming the first English medium state in India.

By 2024-2025, every primary school and high school in the state will have only one medium i.e. English medium. For all practical purposes, admissions to Telugu medium schools have been stopped. Despite court orders against making English a Medium of Instruction (EMI) compulsory, the state government is going ahead on the strength of opinions gathered from parents. According to government sources, 96.17 per cent students and parents opted for English medium, while a meagre 3.06 per cent favoured Telugu medium. English Medium is being introduced, “with a long-term objective of making children in Andhra Pradesh prepared for the challenges and career opportunities of the 21st century so that they could grow into global citizens.”

A school teacher said, “The process of elimination of Telugu medium was set into motion in 2020. Thereafter, each year an English medium batch joins the school at entry-level and a Telugu medium-class passes out at the higher level.” In a high school, only two standards i.e. 9th and 10th, will be in Telugu medium by July 4 this year when schools reopen after summer vacations. “These students will pass out in 2024-25, converting each school into a complete English Medium school with Telugu as a compulsory subject,” the teacher added.

The decision to promote English above Telugu has caused a vertical split among the intellectuals with one section decrying chief minister YS Jaganmohan Reddy’s attempt to make Andhra an “English state” while many others welcomed the step as a radical change in favour of poorer sections, mostly from backward classes, scheduled castes and scheduled tribes.

Kuradi Chandrasekhar Kalkura, who has been fighting for promotion of Telugu as an official language for three decades, says this is “burial of ideals” of Mahatma Gandhi and Potti Sriramlu (1901-1952), whose death following 56-day-hunger strike led to the creation of Andhra state.

“You need not eliminate Telugu medium to introduce English. What the schools need is trained teachers as well as better environment for learning. Removal of Telugu as medium of instruction from schools is disservice to the mother tongue. Continuing Telugu as a compulsory subject is no justification for the removal,” he said.

On the other hand, Dr A Chandrasekhar, a civil liberties activist, says critics of English education are fighting for a lost cause. “The elimination of Telugu as a medium of instruction (TMI) had begun 25 years ago when parents of 55 per cent of students opted for Narayana and Chaitanya corporate colleges, where neither Telugu medium nor Telugu language as subject were available. Sanskrit had replaced Telugu then. Nobody raised an alarm,” said Chandrasekhar, adding that now the remaining 45 percent of students from rural government schools are getting an opportunity to choose English as a Medium of Instruction (EMI). “The parents of these students are from lower economic strata who cannot afford to admit their wards in private English medium schools. Simultaneously, with the introduction of EMI the government brought improvement in school environment with more toilets with running water, RO drinking water, decent benches, black boards etc,” Chandrasekhar said. The schools nearby became attractive for two reasons: better infrastructure and English education. With these changes, enrolment in government schools began to rise. It meant people started accepting the policy of the government, Chandrasekhar added.

From the view point of parents, the situation in Andhra Pradesh is no way different from the one that existed here in the 19th century; the urge for universal English education remains, with difference being that in 1846 the demand came from a minority-elite section of Madras while it is non-vocal majority that matters more now.

An entire Class 5 disappeared one day

RCM Primary School (RCMPS) in Bodepudivari Palem, located 100 kms away from Guntur town, stands testimony to the strong urge of parents of poorer sections to send their children to English Medium schools.

An aided school, RCMPS, basically caters to the schooling needs of families of agriculture labourers, mostly Dalits and other OBCs from 10 villages. One fine morning, the fifth class of the school suddenly disappeared. The room has been lying vacant for 10 years now. Where did the students disappear?

Well, there is an interesting story behind it.

According to headmaster Shika Margaret, all 60 students from standard 4 got admissions to English medium Gurukul schools run by the state government. Admissions to Gurukul schools is via entrance. The Gurukul offers free education in English medium with hostel facility. RCMPS has the distinction of being the only school in the state which sends the entire class of 60 students to a Gurukul.

“Every year, 98 percent of class four students get admissions to Gurukul from our school. Parents admit children in our school with a condition that they be trained to crack the Gurukul entrance test. They want to see their children study in an English medium school. Getting admission into Gurukul is the sole aim of the parents. We have no option but to respect their sentiments and coach the students accordingly. That year, all 60 students from 4th standard cracked the exam and joined the Gurukul School, leaving the school with no 5th standard,” Margaret said.

According to a senior IAS officer, who is overseeing the implementation of EMI in Andhra Pradesh, the government initiated the scheme to remove two types of inequalities that crept into the education system.

“Those parents, who have the means, send their children to the private schools only because they offer English medium. A few parents, even if they do not have the means, struggle to secure admissions to private schools for their children. As a result, many children from weaker and disadvantaged groups are forced to remain in government schools. Consequently, the education, which is supposed to nullify inequalities in the society, seems to be reinforcing them.

“Another fall out of this inequality is that parents are choosing to admit male children to private schools and send their daughters to government schools to cut down the financial burden on the family. So, the government has decided to correct the historical anomaly that is perpetuating gender inequality in the society, by making available English medium at every level, coupled with improved infrastructure,” the official said.

The Andhra Pradesh Teachers’ Federation (APTF), a representative body of the teachers, is unhappy over complete elimination of Telugu medium from schools. The Federation, which favours continuation of Telugu medium, feels lack of trained teachers, difficulty of rural students in switching over to English medium would make the plan un-implementable. APTF state president Hrudaya Raju said the government had not taken the teachers into confidence before imposing English on students. He urged the state to continue two media – Telugu and English – to allow the parents an option to choose from. But, the government sources dismissed the view stating that the steps had been taken to ensure smooth transition from Telugu medium to English Medium. “The government has made available bilingual textbooks at primary schools. The textbooks have same lessons in English and Telugu languages on opposite pages and the students are allowed to write exam in the language of their choice,” said a source in the education department.

English is popular with parents and teachers

Though a section of teachers feels that the plan was ill–guided one as complete elimination of mother tongue as medium of instruction had not taken place anywhere in the country, others like Mantri Rammohan Rao and Prasada Babu see this as an opportunity for poorer sections to familiarise themselves with English.

Matri heads a mandal primary school in Vizianagaram district which is one of the best run schools in Andhra Pradesh. The school, equipped with all modern facilities like toilets, RO drinking water, and wash basins with napkins, a beautiful garden, saw enrolment go up in the past two years. “There is no resistance whatsoever from parents to English education. In fact, they are happy that the school closer home has now become desirable with basic amenities and English as Medium of Instruction,” Matri said, adding that the school which has only three teachers now, needs a teacher for every class as the enrolment is on the rise.

Prasada Babu, a teacher from Ryamata in Kadapa district, is working in a school that is a beneficiary of modern infrastructure under “Nadu–Nedu” scheme. The scheme meant to provide the school with all modern equipment is under implementation in a phased manner. According to Prasada Babu, the “Nadu –Nedu” schools of Andhra compete with much-talked about Delhi government schools in basic amenities.

He said, the infrastructure has started changing people’s viewpoint towards a government school. As for parents, they are happy with EMI. Babu, however, has a suggestion: the concept of bilingual textbooks meant to make the transition smooth should be extended to high schools as well for the benefit of slow learners.

Curiously, many parents this writer spoke to, are blissfully unaware of the raging debate on mother tongue versus English.

Wondering as to how his son’s English medium in local government school would kill Telugu language, Varanasi Narayana, a weaver from Proddutur, Kadapa district, said he had overcome the guilt of not being able to send his two sons to a private English school. “I attempted to send my two sons to a convent. But they demanded huge fee which I cannot afford. Now, English is taught in local government school which has all the amenities. They are offering books and shoes as well,” he said.

Many parents have exuded hope that their children would certainly catch up with their peers from private schools.