Except for the BJP, all political parties, including the ruling YSR Congress, opposition Telugu Desam Party and the Left supported the bandh. 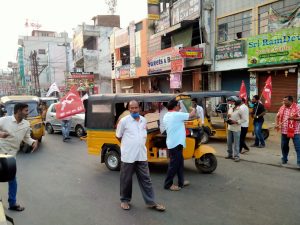 With the state government extending support, all educational institutions and State Road Transport Corporation also joined in by declaring a holiday. Buses remained off roads till afternoon, paralysing normal life. Autos also remained off the roads across the state. Protestors obstructed the movement of private vehicles.

Many shops, business establishments and cinemas voluntarily observed the bandh. Truck owners’ associations also extended support to the demand for continuation of the steel plant in public hands. 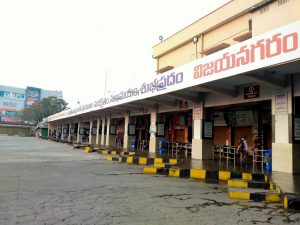 There was a minor clash between the YSRCP and TDP workers in Kaikaluru town in Krishna district. Police pacified them and dispersed the crowds.

In Visakhapatnam, the YSRCP organised a human chain in support of the agitation by the trade unions of the steel plant. Party general secretary and MP V Vijay Sai Reddy, state minister Avanti Srinivas and local MP MVV Satyanarayaan took part in the agitation.

Farmers from Amaravati, the capital region, joined the protests.

Slogans against privatisation resonated in the remote tribal hamlets in Visakhapatnam and East and West Godavari districts. 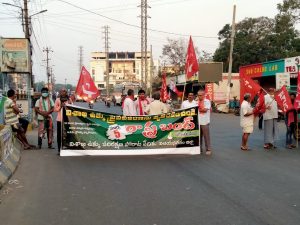 In Vijayawada, the TDP and the Left parties took out a two-kilometre procession demanding withdrawal of the privatisation move.

It may be mentioned that Chief Minister YS Jagan Mohan Reddy has already written to Prime Minister Narendra Modi suggesting alternatives to continue the steel plant in the public sector.