At least 46 people have lost their lives and 11 are missing in Uttarakhand as fast-flowing floods and landslides triggered by heavy incessant rains ran rampage through several parts of the state over two days, stranding tourists at different places and halting the Char Dham pilgrimage.

Chief Minister Pushkar Singh Dhami on Wednesday visited Kumaon, one of the worst-hit regions, to take stock of the situation. He told reporters there was “massive damage” across the state, and it would take time to return to normalcy. Dhami has sanctioned ₹10 crore each to district magistrates for relief efforts. 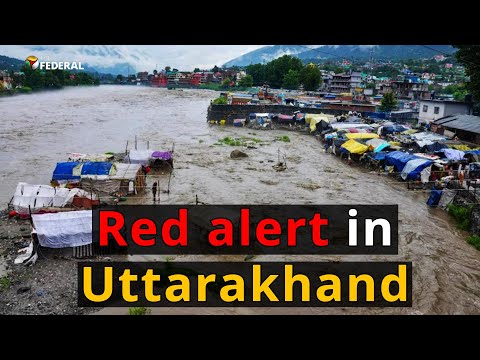 A severe flood alert was announced near Haridwar where heavy rains are expected to raise the levels of Ganga. However, there is some relief as the Met department said the rain would reduce significantly on October 20.

Mall Road in Nainital and Naina Devi temple located along the banks of Naini lake have been flooded, while a hostel building has been damaged due to landslides. The lake was brimming and at par with the Lower Mall Road.

#Uttarakhand Nainital lake's water is on level with the lower Mall Road near the Tallital area. Non-stop rainfall since yesterday has disrupted lives across the state with several landslides & deaths reported. Hope this ends soon, it's quite scary! pic.twitter.com/QJa24kSjaq

The district administration is trying its best to help tourists stranded in the town. The police has been deployed to warn incoming and outgoing traffic, asking them to stay put until the wet spell is over, a report from Nainital said.

Around 100 people were stuck at the premier Lemon Tree hotel on Ramnagar-Ranikhet route, with water from swollen Kosi river entering the resort. People who were making their Char Dham pilgrimage and had reached Haridwar and Rishikesh have been asked not to proceed further until the weather improves.

Of the five people who died on Monday, three were labourers from Nepal who were staying near the tourist spot Lansdowne in Pauri district. They were killed when landslide hit a field above the place they were staying and rubble buried them alive, district magistrate Vijay Kumar Jogdande said.

A house collapse in Champawat district killed two others. A rise in water levels in nearby rivers and streams saw heavy flow of water across various parts of the district and washed away an under-construction bridge.

#WATCH | Uttarakhand: Occupants of a car that was stuck at the swollen Lambagad nallah near Badrinath National Highway, due to incessant rainfall in the region, was rescued by BRO (Border Roads Organisation) yesterday. pic.twitter.com/ACek12nzwF

As per visuals put out by locals and news agency ANI, many roads were seen inundated, with water flowing at a rapid pace, making it difficult for people to even walk across.

The CM asked people not to panic, saying all necessary steps are being taken to evacuate them to safety.

He said Prime Minister Narendra Modi had spoken to him on the phone to take stock of the situation and assured him of all necessary help.