Three bodies have been found so far in the glacier break disaster at Joshimath in Uttarakhand’s Chamoli district on Sunday (February 7). The mishap has triggering a massive flood in the Dhauli Ganga river.

At least 150 labourers working at the Tapovan power project of Uttarakhand are feared dead or missing even as 3 bodies have been recovered, an Indo Tibetan Border Police (ITBP) spokesperson told PTI.

Three bodies have been recovered so far now, said Vivek Pandey, the ITBP spokesperson at New Delhi. ITBP guards the actual line of control with China. 250 personnel of the border force are working on the rescue operation.

About 16-17 labourers are safe inside the tunnel at Tapovan and the teams are clearing debris to rescue them.

Meanwhile, DGP Ashok Kumar told PTI news agency that the power project at Tapovan-Reni has taken the brunt of the glacier burst and has been completely swept away.

“The situation is under control now. There is a dam at Srinagar and it has contained the flow. The power project has taken the damage,” Kumar said.

All the concerned districts have been alerted in the wake of incident. Officers and employees of Chamoli District Administration and State Disaster Response Force (SDRF) have reached the spot. 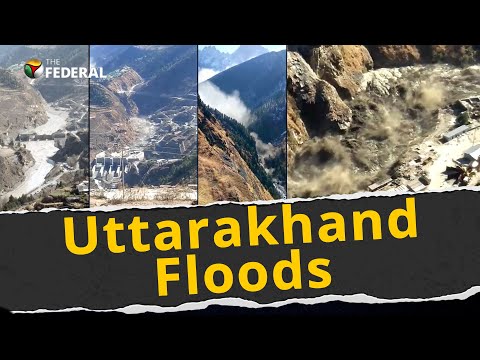 The Chamoli district magistrate has instructed evacuation of the villages on the bank of Dhauliganga river. People are also being evacuated from near Alkananda and the flow of Bhagirathi River has been stopped, and Srinagar Dam and Rishikesh Dam emptied, said Uttarakhand Chief Minister Trivendra Singh Rawat.

#WATCH | A massive flood in Dhauliganga seen near Reni village, where some water body flooded and destroyed many river bankside houses due to cloudburst or breaching of reservoir. Casualties feared. Hundreds of ITBP personnel rushed for rescue: ITBP pic.twitter.com/c4vcoZztx1

Those stranded in affected areas and need assistance may contact the Disaster Operations Centre on 1070 or 9557444486, according to the CM.

“The water flow in Alaknanda river has become normal past Nandprayag. Water level of the river is now one meter above normal but flow is decreasing. The Chief Secretary, Disaster Secretary, police officials and all teams are monitoring the situation in the disaster control room,” he added.

Union minister Nityanand Rai said two teams of the ITBP have reached the spot and three NDRF teams have been rushed from Dehradun. Three additional teams will reach there with the help of IAF chopper till evening while SDRF and local administration are already at spot, said the junior home minister.

Union Home Minister Amit Shah has been brief about the situation. He said he has spoken to CM Rawat and DGs of ITBP and NDRF, and that all concerned officers are working on war footing. “Every possible help will be provided to Devbhoomi,” the minister said.

“Some more NDRF teams are being airlifted to Uttarakhand from Delhi. We are constantly monitoring the situation,” he added.

NDRF DG S.N. Pradhan said the glacier burst has impacted Rishiganga river and flooding has taken out one bridge being constructed by the Border Roads Organisation. The upper reaches of the Rishiganga project also has been damaged. Chamoli, Joshimath and other downstream reaches will be affected, he said.

ITBP spokesperson Vivek Pandey said over 200 jawans are on the job and are working in collaboration with the local administration. One team is on the spot to assess the situation. Another team is deployed near Joshimath to raise awareness and evacuate people, he said, adding that the situation is now under control.

Besides, Indian Army has also deployed choppers and troops to tackle the flood situation. The military station near Rishikesh is actively involved in coordination of rescue and relief operations with local administration, said the Army. Officials said six columns (around 600 personnel) of the Indian Army are moving towards the flood-affected areas.