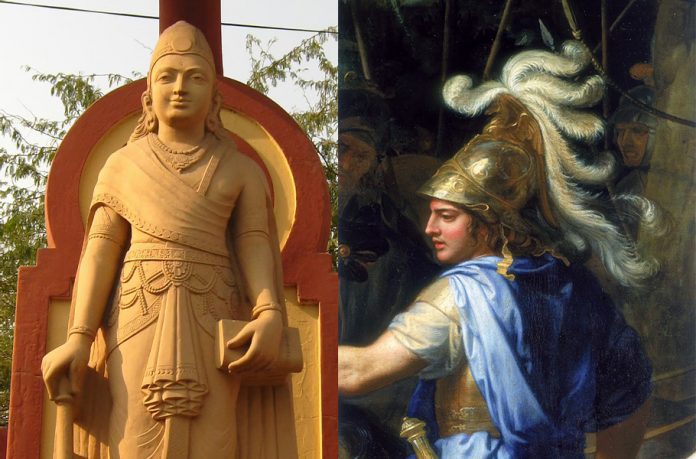 It was after Alexander, the Great's death that Chandragupta Maurya took advantage of the power vacuum and extended his empire

BJP continues to gives its own spin to Indian history. The rate at which the ruling party distorts history, it has become necessary for politicians and journalists to brush up on their Indian history. The most recent question that had people scratching their heads in confusion being: whether Chandragupta Maurya, the founder of the Maurya dynasty had fought a war with the Macedonian King, Alexander the Great, and defeated him? Especially since the latter died in 323 BC, and the Mauryan empire was founded only two years later in 321 BC?

It was Uttar Pradesh Chief Minister Yogi Adityanath, who sparked off this row, when he launched a scathing attack against historians in Lucknow on Sunday (November 14). He mocked “history” for not giving the just due to a king like Chandragupta Maurya by not calling him great. “History did not call Ashoka or Chandragupta Maurya great, whom did it call great? The one who lost from him. They call Alexander, the great,” he said, not-so-gently steering the conversation prior to an UP Assembly election in February 2022, towards the “injustices” meted out in our history books.

Back in 2019, Union Home Minister Amit Shah at a conference in Varanasi, had wanted to elevate another historical figure, Emperor Skandgupta of the Gupta empire, as a “Veer or Brave”. At that time, he had emphasised the need to rewrite history from an Indian or bharatiya point of view contending that existing historiography has been penned “particularly by British and Mughal-era historians and Leftists” and had not put adequate emphasis on Indian heroes who had unified the country from the Gangetic plain to almost upto Afghanistan, and keeping out “invaders”.

Predictably, Adityanath too trotted out the same argument talking about how the nation has been “cheated and that historians are silent” on it. This silence is because if the “truth” comes out before Indians, the society will stand up once again, he asserted. Unfortunately, in his haste to drive home his point of the greatness of Indian emperors, who lived many centuries ago, the UP CM had got his facts wrong.

It was AIMIM chief Asaduddin Owaisi, who quickly stepped in to set the history record straight in a tweet.  “Hindutva is a fake history factory. Chandragupta and Alexander never met in war,” and went on to criticise the lack of a good public education system in the country. In the absence of good schools, baba-log get to make up facts according to convenience. Baba doesn’t value education and it shows, he added.

What does history say?

History does not mention a direct war between the Greek conqueror and the Mauryan emperor. In fact, Alexander the Great died in 323 BC, and Chandragupta Maurya emerged as a powerful and prominent ruler two years after, in 321 BC. After Alexander’s death, Chandragupta Mauyra took advantage of the power vacuum, the disruption among local kingdoms, and gathered an army to overthrow the Nanda power in Magadha in present day eastern India. That marked the beginning of the great Mauryan empire.

Alexander the Great’s Macedonian empire had spanned from Persia to modern-day Afghanistan and parts of Indus Valley, and after his death, was divided into four fragments. The eastern part of the empire was helmed by his general Seleucus I Nicator, who was the one, who fought the Seleucid-Mauryan war in 305 BC and was defeated by Chandragupta. In a peace treaty, the Seleucid empire ceded territories that included Kabul and Kandahar.

In its time, the Maurya Empire was indeed one of the largest empires of the world. At its greatest extent, the empire stretched to the north along the natural boundaries of the Himalayas, to the east into Assam, to the west into Balochistan (southwest Pakistan and southeast Iran) and into the Hindu Kush mountains of what is now Afghanistan.

Chandragupta Maurya established a single currency across India, a network of regional governors and administrators, and a civil service to provide justice and security for merchants, farmers, and traders. He operated a nationally administered system of taxation, which was based on the principles of the ‘Arthashashtra’, an ancient Indian treatise that included advice on how to collect taxes, administer trade and agricultural resources, manage diplomacy, and even how to wage war!

History is of great importance for the BJP obsessed with the idea of fostering Hindu nationalism. “…it occupies prominent space in the consciousness of the Hindutva contingent’s leadership and cadre because much of their contemporary politics is justified by stating that it is imperative to undo ‘indignities’ and ‘wrong’ interpretations and emphasis of the past”, pointed out an article in Deccan Herald. The BJP’s obsession with  getting the “correct” depiction of the past is just ending up tying themselves into a knot besides displaying their ignorance of the past. How can two historical figures, who ostensibly had never met, be pitted against each other?

Facts turn into fiction, as the high-pitched rabble-rousing continues ahead of the UP elections. However, there will be more twisting and reshaping history to score political points, especially before an election. It may be wise to keep a history book handy.