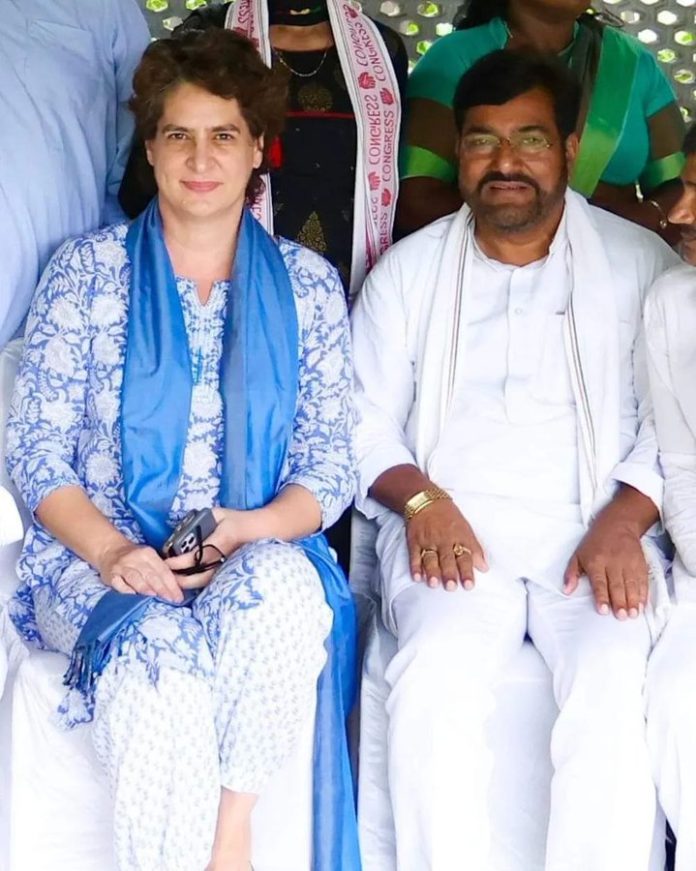 After a desperate search of over six months for a leader who could steer its Uttar Pradesh unit, the Congress finally picked former Bahujan Samaj Party (BSP) leader, Brijlal Khabri, for the role. The grand old party, struggling to revive itself in UP for over three decades, also rolled out a new experiment of appointing six presidents – five of them imported from other parties – for different regions of the state.

The 61-year-old Brijlal Khabri, once a confidant of BSP founder Kanshi Ram and a former Lok Sabha MP from Jalaun in UP’s Bundelkhand region, will be the new UP Congress chief.

The Congress’s state unit had been without a president since March this year, when Ajay Kumar ‘Lallu’ had stepped down from the post after the party’s humiliating rout in the UP assembly polls.

Sources told The Federal that over the past six months, Congress’s UP in-charge Priyanka Gandhi Vadra, who had personally crafted and led the Assembly poll campaign but predictably escaped all moral accountability for the resounding failure in boosting the party’s electoral performance, screened various potential candidates to succeed Lallu before finally narrowing down on Khabri.

Khabri had joined the Congress in 2016 after quitting the BSP over differences with Mayawati. Though he has only one Lok Sabha win – he had won from Jalaun on a BSP ticket back in 1999 before losing a string of re-election bids – and another term in the Rajya Sabha as a BSP member between 2008 and 2014 to his credit, Khabri is a known face in the state’s electorally crucial Dalit community.

Incidentally, the decision to appoint a Dalit chief for the party unit in the country’s most populous state coincides with the Congress’s first family – the Gandhis – tacitly manoeuvring another Dalit, Mallikarjun Kharge, to take over as national president of the party later this month.

Party sources told The Federal that though the factors that propelled Kharge as frontrunner for the Congress’s national presidency may be different from the ones that contributed to Khabri’s unexpected elevation in UP, a common expectation that the party has from both is to endear itself to its once captive but long lost vote bank of the Dalits.

“At the Nav Sankalp Chintan Shivir, after long deliberations, the party had decided that it must reclaim the confidence it once enjoyed among the Dalit, tribal and backward caste communities as also the religious minorities,” a senior Congress leader involved in the party’s outreach to the SC/ST/OBC and religious minorities told The Federal.

“Caste-based regional outfits in the post-Mandal era and the rise of BJP’s Kamandal and Hindutva politics took these voters away from us. We had decided in Udaipur (venue of the chintan shivir) that representation of these communities in key party positions must go up. Even before Udaipur we were doing it; our CMs in Rajasthan and Chhattisgarh (Ashok Gehlot and Bhupesh Baghel) are both from backward communities… now we want to do it more aggressively,” the leader added.

Khabri’s appointment has caused some friction within Congress old-timers in UP, who complain of being sidelined to make space for “ideology neutral imports from our rival parties”, say Congress sources. The decision has been taken with an eye on emasculating the BSP electorally.

Priyanka believes that the Dalits, who comprise nearly 21 per cent of UP’s population, are desperate for an electoral option beyond Mayawati’s BSP. The Congress’s UP in-charge, who has regularly raised issues of rising atrocities on Dalits under BJP rule and had famously swept the floor of a temple in a colony inhabited by the scheduled caste Valmiki community during the UP Assembly polls, is convinced that a concerted Dalit outreach could hold the key to her party’s electoral revival in the state that contributes 80 seats to the Lok Sabha.

As a former BSP leader, Khabri is well-networked among the state’s Dalits and could prove helpful in winning over the community in BSP strongholds where voters have begun to get disenchanted by Mayawati. The Congress, say sources, believes that the BSP’s decimation in the recent Assembly polls – it bagged only one of the state’s 403 seats and saw its once captive 20-25 per cent vote share plummet to 12.8 per cent – is a clear sign of Dalit disillusionment with Mayawati.

Though the Congress had won just two seats in the Assembly polls with its lowest ever vote share of 2.33 percent under her stewardship, Priyanka believes this could change for the better if her party shows serious intent towards Dalit outreach.

There also appears to be a clear focus on Bundelkhand, an economically and socially backward region with a sizeable Dalit population. While Khabri comes from the region and will head the party’s state unit, Priyanka’s close aide, former UP Youth Congress president Yogesh Dixit, has been appointed the party’s regional president for Bundelkhand.

Of the six regional presidents that the party appointed in UP on Saturday (October 1), Dixit, incidentally, is the only one who has been with the Congress throughout his political career. Though he hails from Aligarh in western UP, Congress sources say his appointment as regional president for Bundelkhand, along with that of Khabri’s as overall state chief, shows Priyanka’s seriousness on reviving the party in the impoverished region.

Also read: BJP only party that puts country above everything else, says Adityanath

In the past six months that the UP Congress was headless, Dixit was Priyanka’s point person for organisational matters in the state. Priyanka had earlier handpicked Dixit for the post of vice president of UP Congress and in July 2021 he was also made the state unit’s administration in-charge.

While Dalit outreach is the big message that the Congress is trying to send with its restructuring of the UP unit, the party has also made a simultaneous bid to please other electorally crucial communities and perk up the organisation in different regions of the state.

A parallel effort has been made to please the Brahmins, another erstwhile vote bank of the Congress in UP which in recent decades has variously backed the BSP and the BJP. During the UP Assembly poll campaign earlier this year, nearly all political parties in UP had tried aggressively to woo the Brahmins because of a perception that the community was upset with the BJP due to chief minister Yogi Adityanath’s alleged attempts at sidelining, and even victimising, prominent Brahmins politically, socially as well as administratively.

Two of the six regional presidents – Dixit and Nakul Dubey – are Brahmins. Among the new office bearers, Dubey is also the newest entrant to the Congress, having joined it just four months back. A former minister in the Mayawati-led BSP government (2007-2012), Dubey was once a prominent figure in the BSP supremo’s Dalit-Brahmin social engineering experiment. In UP’s political circles, he is still known to have a close personal rapport with BSP general secretary and Mayawati’s closest aide, SC Mishra. A former BSP MLA from Lucknow’s Mahona seat, he will now be the Congress’s president for the Awadh region.

Other UP Congress leaders

Another former BSP leader who has made the cut as regional president in the restructured UP Congress is Virendra Chaudhary. Chaudhary is one of the Congress’s two MLAs in the state assembly – the other being Aradhana Misra ‘Mona’, MLA from Rampur Khas and daughter of party veteran Pramod Tiwari. He had won the March assembly polls from Pharenda in Maharajganj district after having made four unsuccessful bids in the past – thrice on a BSP ticket – to wrest this seat.

Chaudhary hails from the backward caste Kurmi community that has a sizable presence across various eastern UP districts. He will now be the Congress’s president for the Purvanchal region that includes erstwhile BSP strongholds of Ambedkar Nagar, Sant Kabir Nagar, Siddharth Nagar, Kushi Nagar and his own native Maharajganj district.

The next regional president also drawn from the ranks of the BSP is Nasimuddin Siddiqui, who was once the Muslim face of Mayawati’s party and a powerful minister in her government. Siddiqui was sacked from the BSP by Mayawati after her party suffered a crushing defeat in the 2017 UP Assembly polls, though he claims he quit the party. He joined the Congress in 2018 and was later made in-charge of the party’s communication department in the state.

Siddiqui will be the Congress’s regional president for western UP that has a formidable concentration of Muslims and a tall leader from the community in Samajwadi Party’s Mohd. Azam Khan.

Former five-term MLA Ajai Rai, who unsuccessfully contested the 2014 and 2019 Lok Sabha elections on a Congress ticket against Narendra Modi from Varanasi, has been appointed president for the Prayagraj region. Rai has had past stints in the BJP and the Samajwadi Party. He joined the Congress a decade ago. Rai belongs to the Bhumihar community that has a sizable presence in Varanasi, Allahabad and adjoining districts.

Another former SP leader who joined the Congress last year and has now been handpicked by Priyanka to take over as regional president for the Braj zone is Anil Yadav. Anil’s wife Pankhuri Pathak has been a close associate of Priyanka for some time now and was recently appointed as chairperson of the UP Congress’s social media department.

Though Anil hails from Noida, as in-charge of the Braj region, he will be responsible for rebuilding the party in districts such as Etawah, Mainpuri – electoral fiefs of Mulayam Singh Yadav’s clan that have a concentration of the Yadav community – as well as the BJP strongholds of Agra and Mathura.