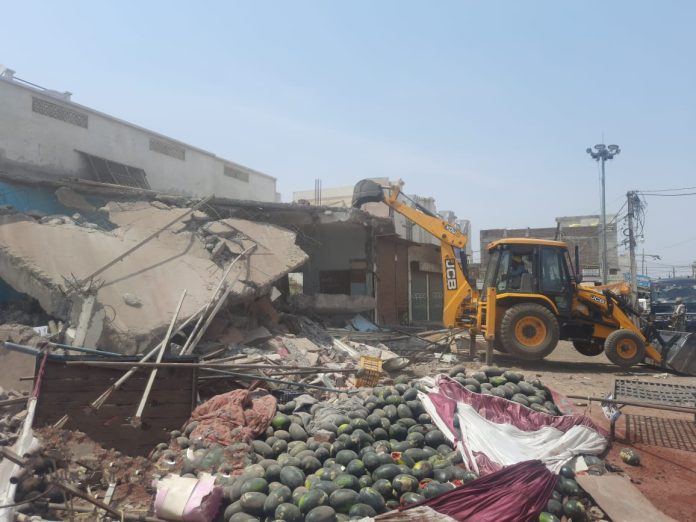 Authorities in Madhya Pradesh’s Khargone district demolished at least 50 “illegal” structures on Monday said to be belonging to people accused of pelting stones at a Ram Navami procession a day earlier.

A curfew was clamped in Khargone city on Sunday and more than 80 people have been arrested after stones hurled at a Ram Navami procession triggered large-scale arson, officials said and added that the situation here was under control.

The state government said damage caused to public and private properties during the violence will be recovered from rioters.

According to reports, 16 houses and 29 shops were among the illegal structures in five localities of Khargone that were demolished.

“All the shops and houses that have been demolished so far were illegal structures constructed on encroached land. There were reports of stone pelting from these areas after which action was taken,” Sub Divisional Magistrate Milind Dhoke told the Indian Express.

Of the 12 shops demolished in the Talab chowk area, eight were run by Muslims and the remaining four by Hindus. All the 12 shops were part of the Khargone Jama Masjid complex and owned by the masjid committee, the daily reported.

Action has also been taken against four state government employees for spreading rumours over the communal violence in the city, he said. Of the four, three were daily wage employees, whose services were terminated, while the fourth staffer was suspended, an IAS officer said.

In Khargone Madhya Pradesh the houses of muslims were burnt yesterday the mosque were set on fire instead of stopping administration has arrested more then 70 Muslims now there homes are been demolished by administration#ArrestSanghiGoons #MuslimLivesMatter pic.twitter.com/5iQObKbIXf

Inspector General (IG) Rakesh Gupta, who is camping in Khargone, said the law and order situation in the city was under control and action against anti-social elements was continuing.

Earlier on Monday, Chief Minister Shivraj Singh Chouhan said damage caused to public and private properties will be recovered from rioters as he vowed strict action against the miscreants.

“The rioters have been identified and they will not be spared. Strict action will be taken against them. There is no place for rioters in Madhya Pradesh,” the CM said.

“We have passed the Damage to Public and Private Property Recovery Act. We are constituting a claims tribunal under the Act and after assessing the loss, its recovery will be done from rioters,” Chouhan said in a statement.

Speaking about the violence earlier in the day, Madhya Pradesh Home Minister Narottam Mishra said houses from where stones were hurled at the procession will be turned into rubble.

Some people who are hurt by the outcome of the recently-held Assembly elections in five states are now instigating violence, the minister claimed.

They want to disturb peace in the state and the country. Even from these (Assembly poll) results, such people have not understood what the country wants, Mishra said.