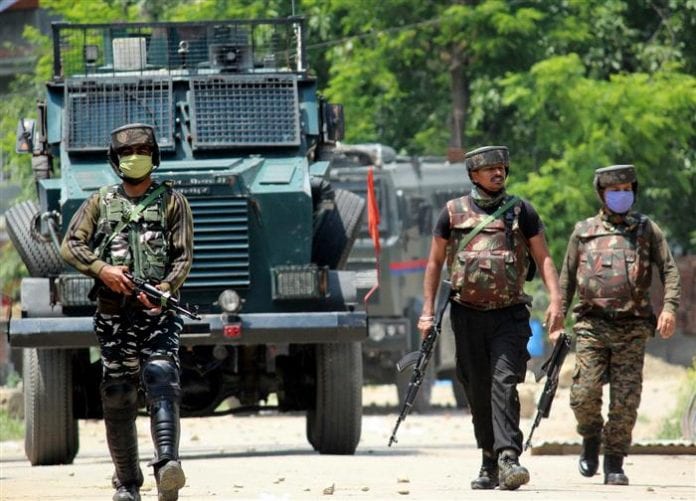 The attack has been widely condemned by political parties. Representative Photo

Two civilians and two policemen were killed and 7 others were injured on Saturday (June 12) in a militant attack on security forces in J&K’s Sopore town, media reports said.

The attack was on a police team at Armpora area of Sopore, around 55 km north of Srinagar, reports said.

Police sources say around 12:30 pm, the militants fired at a police vehicle, which was announcing Covid-curfew, killing two civilians and two cops. Another two cops and two civilians, who were also wounded in the attack, have been moved to Srinagar for treatment.

“Reinforcements have reached the spot to carry out searches. The area has been cordoned off”, police said.

Also read: Bollywood aims to shoot more films in Kashmir, but can it improve its image?

The grenade explosion and subsequent gunshots created fear and people started running for cover. Sources said the two cops and two civilians were brought dead to the sub-district hospital Sopore. After the attack, the Army, police, and security forces have cordoned off the area and started search operation in the area.

Political leaders have condemned the attack. “When will this madness end? Gun came to Kashmir in 1989. I can unambiguously state that the gun enslaves the very people that it purports to fight for. The gunmen really need to ponder whose war they are fighting,” tweeted Peoples Conference chairman Sajad Gani Lone.

“Such attacks must be condemned without reservation,” former Chief Minister Omar Abdullah said. National Conference said it unequivocally condemns the killing of the cops and the civilians in Sopore. “The government must ensure a stop to such loss of lives,” the NC spokesman added.

Former Chief Minister Mehbooba Mufti condemned the attack, saying it will not resolve Kashmir. She said the gun is no solution to the Kashmir problem. “Neither Delhi’s gun nor the gun taken by local youth here will resolve Kashmir,” she added. She said such attacks only defame Kashmiris and they are labeled as terrorist. I think dialogue is the solution to every problem,” she added.

Apni Party President Syed Mohammad Altaf Bukhari said the attack most gruesome and heart-wrenching. “Violence has never been a solution but a huge impediment in peace and progress of any society. Extremist forces are only adding to the suffering of people. Regardless of any political, ideological or religious motivations — violence in any of its manifestations is unacceptable,” Bukhari said.

He said that the senseless violence has ravaged all the sections of the society in Jammu and Kashmir inflicting a heavy toll on precious human lives. “Not only a generation has been lost to this barbarism but forces inimical to peace have also wreaked havoc to the socio-economic conditions of the people during the last over three decades,” he added.