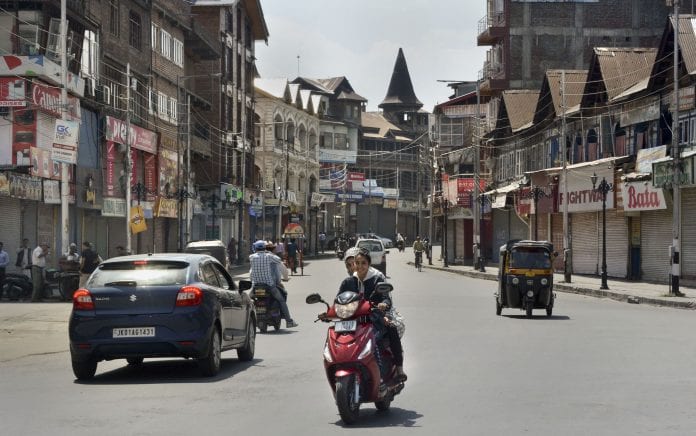 Asserting that Articles 370 and 35A of the Indian constitution allowed a breeding ground for armed violence in Jammu and Kashmir, a top Kashmiri-American body on Wednesday (September 4) alleged that a group of propaganda-mongers is spreading misinformation and confusion about the abrogation of these provisions.

“There has been a tremendous amount of confusion, misinformation, and fear being disseminated by propaganda-mongers and the ill-informed press about the abrogation of Article 370 and 35A by the government of India,” the influential Kashmiri Overseas Association (KAO) said.

While it is human nature to condemn any injustice, like loss of internet and phone lines to the people living in the Kashmir valley, it is also prudent to understand the implication of these articles that shaped the destiny of “us minorities of the region over the last 70 years”, said the US-based organisation, representing the Kashmiri diaspora.

The temporary articles 370 and 35A were highly discriminatory against all indigenous Kashmiri minorities – Sufi Muslims, Shia Muslims, Ahmadi Muslims, Dalits, Gujjars, Kashmiri Hindus (commonly known as Kashmiri Pandits), Kashmiri Sikhs, and Buddhists, it said, adding that only the majority, Sunni Muslims, were privileged to benefit from this provision.

“Article 370 and 35A allowed a breeding ground for armed violence in Kashmir,” the KAO said.

It said the campaign of intimidation and harassment had been ongoing in the valley for decades and worsened in the late 80s with the growing influence of the strait-laced interpretation of Islam propagated through “Wahhabism.”

Pakistan was able to capitalize on this by financing, arming and training militant groups across the border, the KOA said, adding that this all came to a head on the night of January 19, 1990.

“Through the loudspeakers of mosques, militants screamed words of hate for minorities. ‘Convert, leave, or die’ and ‘leave your women behind and send the men off’ were popular slogans. In the weeks following, leaflets were posted on the doors of Kashmiri Hindus asking for their immediate departure from the valley or face the consequences,” the KOA said.

This was followed by the targeted killings of Kashmiri Hindus and Sikhs, in order to send a clear message to the minority communities that they were not welcome in the Kashmir valley, the KOA said in a statement to the mainstream American press.

“It uprooted peace-loving, helpless minorities. Over 500,000 Hindus and Sikhs were ethnically cleansed out of their homes with the purpose to create a minority-free Kashmir valley,” it said.

ALSO READ | Being Modi: The political dynamics of abrogating Article 370

Yet, because of Article 370, the government remained silent spectator, the KOA claimed.

“We were left to bear the horrors of terrorism on our own, including being forced to witness the murders and rapes of our own family members. Our community members were brutally killed, with many homes, businesses, and temples destroyed. We became refugees in our own country, some forced to live in squalid tent camps,” it said.

The KOA said it believes that abrogation of these articles, which provided special status to Jammu and Kashmir, will provide equal opportunities to all and a chance for the development of regions like Ladakh which have been neglected for far too long.

Removal of these articles will help curtail terrorism in the valley and empower women as more progressive laws will apply to them equally with the rest of the country, it said.

Proactive measures of added security, restrictions, and internet regulation placed by the Government of India are crucial to curb terrorism and prevent the loss of civilian lives and curtail the foreseen unrest and retaliation by militant groups, it said.