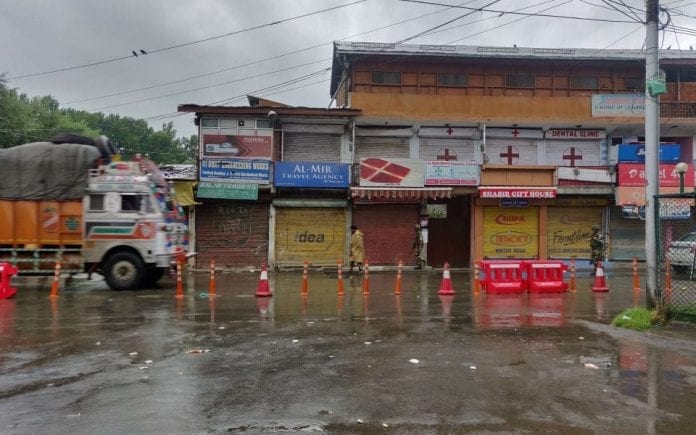 When dawn breaks over Srinagar’s Sanat Nagar area, a feeble azaan from the adjoining green-domed mosque wakes up Fehmida Fazili from an uneasy sleep.

On any other morning, the muezzin’s cry would have been a call for Salat al-fajr — the first prayer of the day Fazili would have performed with her husband and then gone back to sleep for a few more hours. But, for the past fortnight, Fazili has turned to a new routine.

On waking up, she instinctively walks up to a corner in her living room and picks up one of her most precious possessions — a landline phone. As she presses the receiver to her ear, a faint crackle tells Fazili her only link to the outside world is still alive. With a shukrana on her lips, she proceeds for the namaaz.

Telephones have been inextricably linked to Kashmir’s destiny. When lashkars of tribals from north Pakistan had raided Kashmir in October 1947, India could be informed of the attack only because a single telephone line still existed between the army headquarters of the two countries.

Using that link, Rawalpindi 1704 was able to place a private call to New Delhi 3017, informing the British commander-in-chief of the Indian army of the hordes of invaders in Kashmir. Two days later, a Dakota carrying a unit of 1, Sikh led by Lt. Colonel Diwan Ranjit Rai landed at the Srinagar airport. The rest, as they say, is disputed history.

Fazili’s phone is an equally important witness to history.

On August 4, when the Indian government rescinded Kashmir’s special status, shut down phones, internet and cities, around 7 million people were completely cut off from each other and the rest of the world.

Like others, Fazili and her husband Mohammad Ishaq Qureshi — both retired from government service a few years ago — were confined to their home in Sanat Nagar, a posh locality near the airport.

On the preceding night, when their mobile phones were stuck off the grid, the Qureshis didn’t worry much. Kashmir’s troubled history had taught them that even if everything came to a standstill, the government would not shut down the landline phones. Graham Bell’s innovation had, after all, survived the mayhem of the 90s, the turmoil in 2008-10 and the aftermath of Burhan Wani’s death. But, for the first time in Kashmir’s history, around 1:15 am on August 4, the landline also went dead.

Sanat Nagar is its own country in Srinagar. Since it is home to retired officials and the city’s elite, restrictions, jackboots, guns and concertina wires that have become the identity of downtown areas like Khanyar and Habbakadal, have rarely been seen in the locality. Life here is languid, calm and far from the madding crowds that gather routinely in other parts of the city every time protests break out.

The only congregation in Sanat Nagar is usually at the upmarket 7 11 departmental store — the only one in Kashmir — where people from adjoining areas gather for shopping on weekends. On all other days, people prefer to spend time in their kitchen gardens, gazing at the Zabarvan Hills in the distant horizon, reading newspapers and tuning in to Shahrbeen, an evening bulletin on Radio Kashmir on the events of the day.

So, a fortnight later, when the government decided to partially restore communication to select areas — read localities where possibilities of trouble were minimal — the Qureshis were among the first to hear what they now call the sound of music: the shrill ring of a landline phone.

“They were ecstatic when it rang on the morning of August 18. Finally, they were citizens of this world again,” says Tabeenah Anjum Qureshi, their journalist daughter who is recounting their story to me.

ALSO READ | Pak has no locus standi on Kashmir, it can only kick itself for self goal

Just a week ago, concerned by the lockdown and her inability to reach her parents, Tabeenah had taken a morning flight from Jaipur, where she works, to home.

When she clicked open the front gate, her father came out carrying huge bins full of garbage, believing someone had finally landed to collect them. Instead, he saw his daughter who had negotiated her way through the restrictions and razor-sharp wires to their home ahead of Eid.

Soon after the phone rang, Fazili scampered out of her home with a rare spring in the stride of a woman in her sixties. First she informed her neighbours that their phone was working and then returned home to scan an endangered document — a telephone directory — to reach out to relatives.

Since then, the Qureshi house has become a microcosm of Kashmiri life. People from adjoining areas trudge to their home to call relatives, place orders for medicines with sellers outside the state and make requests to people outside to recharge their DTH connections. Some walk in with prayers on their lips and walk out crying, some with a rare shriek of joy.

Samina Begum, 60, had been waiting for news from her daughter in Dubai for a fortnight. When the daughter called her up to tell her that she had delivered a baby, Samina ran out celebrating.

Nahida, a young woman from the adjoining Jawaharnagar area, managed to call up her uncle only to be told he had died four days ago. She went out sobbing over her inability to attend his funeral or the prayers that followed.

Another man was happy that after trying for 30 minutes he was able to call a relative. But the phone fell from his hand when he heard that the relative was hospitalised after an accident.

Dozens of residents went back relieved after they were able to purchase lifesaving medicines through stockists across north India and schedule a pickup. For them, the landline became a lifeline.

Even random strangers from across the world call the Qureshis with requests for conveying their messages to relatives, or to ask them to call back. They scan the Srinagar phone directory and call on random numbers, hoping that one of them will elicit an answer. The Qureshis always oblige. Every time somebody calls with a request, Fazli conveys the message either personally, or through neighbours.

Grateful Kashmiris laud them for their help and also the perspicacity to retain the landline connection in an age of mobile telephony. The Qureshis politely tell them that life in Kashmir is always about being ready for its randomness and never taking for granted the civil liberties people have gotten used to.

So, even with five mobile phones at home, they retained the landline connection, even when everyone around them dumped them in basements like old cassette players and scratched compact discs.

Kashmir is on the edge after a month of lockdown and restrictions. Its markets are shut, schools closed and roads empty. The security forces have relaxed some of the constraints on movement, but there has been very little change on the ground as residents have imposed a ‘people’s curfew.’ Reports of skirmishes, stone pelting and protests keep emerging from downtown and Soura, a huge locality behind to the left of the boulevard that runs parallel to the Dal Lake.

Kashmir is like a pot with a lid placed on the top and a raging fire below. Nobody can say with certainty if the fire would continue to burn till the lid is taken off, or the people would accept the new reality of their life in a few months.

The Qureshis are tired of the uncertainty and the pall of dread that hangs over their lives. In a few days, they will take a flight out of Srinagar for a place far from its suffocating autumn air. While they are happy with their decision to move out till the embers of anger burn in Srinagar, there is a tinge of regret for depriving their neighbours of the only link with the outside world.

Once they leave, their phone would cease to witness the travails of hundreds of Kashmiris on the cusp of another troubled chapter of history.

Delhi hospitals get show cause notices for delay in reporting COVID-...