Two orders issued by the Jammu and Kashmir administration and police department have led to fresh anxiety in the Union territory reminding them of the run-up to Operation Balakot in February and revocation of Article 370 in August last year.

This time, the immediate cause behind the new anxiety in the Kashmir Valley seems to be the tense situation on the Line of Actual Control (LAC) in eastern Ladakh where the Chinese and Indian troops are facing each other eyeball-to-eyeball.

The latest order issued by Directorate of Food Civil Supplies and Consumer Affairs (FSC&CA), J&K Government, says that one of the advisors to the Lieutenant Governor GC Murmu has passed directions in a meeting held on June 23 “to ensure sufficient stocks of LPG (Liquefied Petroleum Gas) in the Valley as the supply of the same gets affected due to closure of the National Highway on account of frequent landslides”. The matter was to be treated “most urgent”.

This is unusual because the J&K highway closure occurs mainly due to vagaries of weather and landslides in the chilly months between December and March, not between June and August.

“In this backdrop, you are requested to take up this matter with all the Oil Marketing Companies (IOCL/HPCL/BPCL) for building up of adequate stocks of LPG which can last up to two months both at bottling plants as well as godowns of LPG…,” the order further reads.

After this order was widely circulated, many took to social media to voice their concern about the situation in Ladakh.

Several media reports have indicated that in response to the Chinese build-up, India too has deployed its air defence systems in Ladakh. Other reports have suggested that Beijing has brought in heavy air superiority aircraft like the Sukhoi-30 and strategic bombers and that the Chinese choppers have been flying very close to the LAC.

Reporters currently camping in Leh also confirm that there is heightened activity in the region and India is fortifying its security deployment and aircrafts are making several sorties.

Meanwhile, in a separate order, the Superintendent of Police, in central Kashmir’s Ganderbal, adjacent to Kargil, has requested 16 educational institutes in the district, including ITI buildings, middle and higher secondary schools be vacated.

“In view of the SANJY (Shri Amarnath Ji Yatra) 2020, and due to dearth of accommodation facilities in district Ganderbal for incoming CAPF (Central Armed Police Force) Coys (companies), it is requested that the below accommodation centres/education institutions may kindly be made available for accommodation of (CAPF) companies,” the order reads.

The Federal spoke to two senior police officers in the region, both of whom confirmed the veracity of the order. Another top officer said he was not authorised to speak to the media for he dealt with counter-insurgency operations alone.

“The orders have created a buzz in Kashmir. The highway is prone to blockades and landslides but in winters not during summers. Such orders and advisories were in circulation in the past as well. After Pulwama attack and ahead of the abrogation of Article 370 on August 5 last year,” senior broadcast journalist Zaffar Iqbal wrote on Twitter.

Meanwhile, Home Minister Amit Shah in an interview with the news agency, ANI, said that “Under PM Modi’s leadership, India is going to win both the wars.” Shah was referring to the government’s fight against COVID19 pandemic and the undesirable tensions on the LAC in Ladakh. 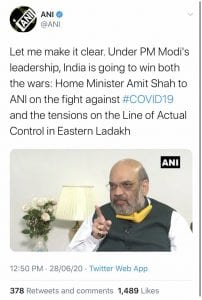 ANI later deleted the tweet but the video of the interview is still available on the internet. Perhaps because Prime Minister Modi has maintained that the Chinese troops have not made any incursions or transgressions.

Before Operation Balakot inside Pakistan in February 2019 and also ahead of the revocation of J&K’s semi-autonomous status in August last year, the government had issued a series of similar orders. J&K’s then-Governor Satya Pal Malik would often tell people “not to believe in the rumours”, but subsequently the ‘rumours’ turned out to be true.

Director FCS&CA sought to allay fears in a late evening clarification. “Due to development work on the highway and bad weather, “there are frequent slides and blockades and that is why we requested oil companies to keep two months’ stocks instead of one month to ensure hassle-free supplies to our people. It is a routine and nothing else.”

How Indian Air Force could buttress country’s defence against ...