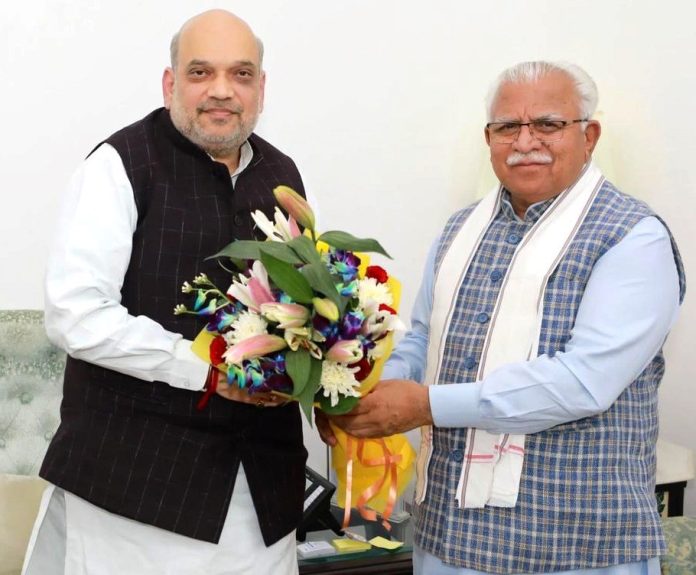 Relations between neighbours Punjab and Haryana have reached a flashpoint once again after home minister Amit Shah announced that Central Service Rules will apply to the employees of the Union Territory of Chandigarh. Currently, Punjab service rules applies to the employees. Pic: @mlkhattar

Relations between neighbours Punjab and Haryana have reached a flashpoint once again. Two days after the Punjab Assembly passed a resolution seeking immediate transfer of Chandigarh to the AAP-ruled state, Haryana Chief Minister Manohar Lal Khattar on Sunday (April 3) hit out at the Bhagwant Mann-led government in Punjab, demanding that they should give water, 400 Hindi-speaking villages to Haryana first before staking a claim on Chandigarh.

As tensions rise on both sides, the Haryana government has summoned a special session of the Assembly on April 5, to discuss several issues in the wake of the resolution passed by the Punjab Assembly. This decision was confirmed by the Transport Minister Mool Chand Sharma to PTI.

On Friday itself after the Punjab resolution, Khattar had made his point of view clear with an emphatic statement: Chandigarh is and will remain the capital of Haryana and Punjab.

The next day, Khattar roundly condemned the Bhagwant Mann-led government telling reporters: “What they did is condemnable and it should not have been done.” Incidentally, the resolution was passed in the absence of the BJP members who had staged a walkout from the House.

Also, Khattar had asked AAP national convener and Delhi Chief Minister Arvind Kejriwal and his Punjab counterpart Bhagwant Mann to apologise to the people of Haryana. Khattar also brought up a festering issue between the two neighbours and asked Punjab to first build the Satluj-Yamuna Link (SYL) canal and transfer Punjab’s Hindi-speaking areas to Haryana.

What triggered the fight

This dispute kicked off when Union Home Minister Amit Shah announced that the Central Service Rules will apply to the employees of the Union Territory of Chandigarh. Until now Punjab service rules applied to employees in Chandigarh. With the switch to central rules, the retirement age of employees in the Union territory increases from 58 to 60 years, and women employees are now eligible for childcare leave of two years instead of one.

Bhagwant Mann’s AAP-led government held a one-day special assembly session in Chandigarh and passed the resolution seeking the transfer of Chandigarh to Punjab. While reading the resolution, Mann said that the Centre’s decision on the Central Service Rules, is a direct attack on the right of Punjab on Chandigarh.

Accusing the Centre of trying to upset the balance in the administration of the Union Territory and other common assets, Punjab CM Mann and other parties including Congress and SAD had slammed the Centre’s decision, claiming that this move goes against the Punjab Reorganisation Act. “This goes against the letter and spirit of Punjab Reorganisation Act 1966. Punjab will fight strongly for its rightful claim over Chandigarh…,” Mann had tweeted.

Central Govt has been stepwise imposing officers and personnel from other states and services in Chandigarh administration. This goes against the letter and spirit of Punjab Reorganisation Act 1966. Punjab will fight strongly for its rightful claim over Chandigarh…

According to media reports, the BJP party is meddling in the Union territory to  woo the voters in the Union Territory, considered a BJP stronghold, ahead of the 2024 general elections

On Sunday, Khattar who was in the Jind district of Haryana, where he inaugurated various developmental projects, raked up an old contentious issue between the two states and accused the Punjab government of being inactive about the SYL Canal. While Haryana Home Minister Anil Vij too told reporters that the “issue of Chandigarh is there but it is not the only issue”.

“There are other issues which are connected to it. There is SYL water (issue), (the issue of) Hindi speaking areas. They (Punjab) have not spoken on those issues,” said Vij.

The SYL canal is a proposed 214-kilometre long project to connect the Satluj and Yamuna rivers. Whenever Punjab demands a rejig of its share of the Ravi-Beas rivers waters, Haryana asks for the completion of the construction of the SYL canal so that they can get its share of 3.5 million acre feet (MAF) of water.

This is an emotive issue for Punjab, as stated by the then Punjab chief minister Amarinder Singh in 2020. He had even warned that “Punjab will burn” if asked to share water.